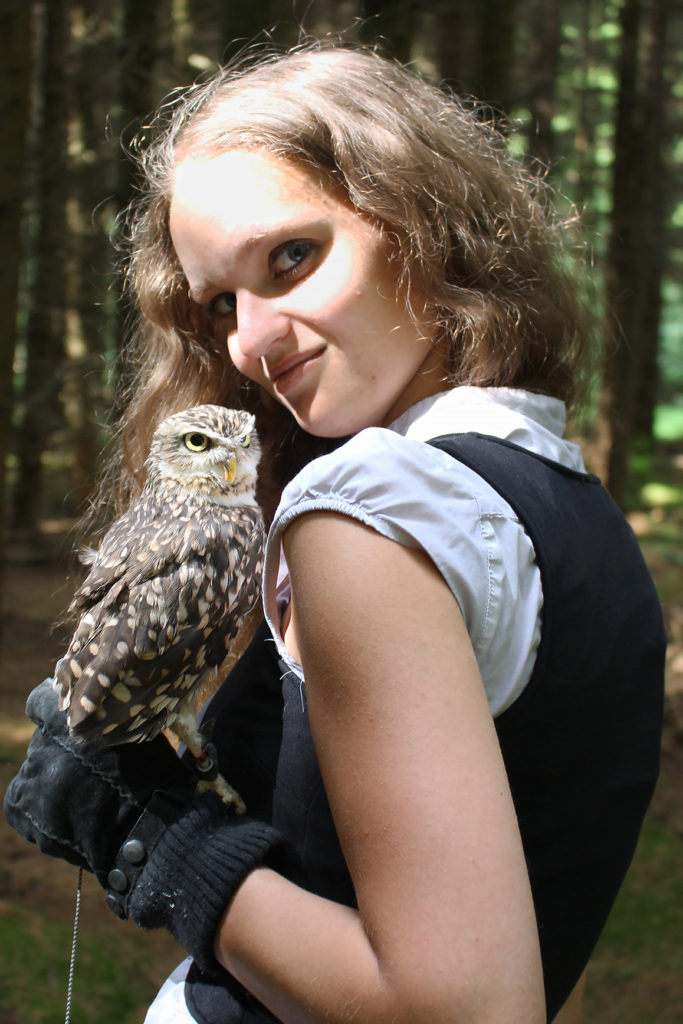 I’m under the impression that it’s expected of me to include an “About the Weirdo”-section.
(Wait, what do you mean it’s ‘author’…?)

In case you didn’t notice either the URL or the big-ass banner at the top of the site, my name is Michelle Louring. Web designer by day, writer by whenever-I-should-be-doing-something-else. I’m also a geek, gamer, cosplayer and all-around-weirdo. Just in case you think I’m exaggerating: The owl in the photo is neither borrowed, stuffed nor Photoshopped. His name is Artemis and he lives in my living room where he likes to mock the birds on the other side of the window.

You likely found my page through one of two things: Books or cosplay.

I started out focusing on the books, since this is officially an author website, but seeing as all my author appearances are at cosplay conventions, it’s all tangled together anyway. Which is why you’ll find a nice little subpage with cosplay pictures on here as well.

I’m considering just making the entire site about owl pictures, since it’s the only content people follow my social media accounts for, so I have a feeling it won’t be much different here.

Where was I? Oh, that’s right. Books.

I have read a lot of either inspiring or just unintentional cheesy author bios on various sites. And you know what?
They’re boring. They’re all the same. They say a lot of things and nothing at all.

Obviously I have the last one down to an art, but I try to avoid the first two. Which is why I have now spent an entire page rambling about owls and cosplays instead of telling you anything about me as an author. The internet is filled with authors, but I dare say cosplaying owl owners are a very exclusive club.

But let’s get it over with:

I’m a writer from Denmark, writing exclusively in English (mostly to keep my mom from reading my books and staging an intervention). I write mainly High Fantasy, strongly influenced by the unhealthy amount of video games and Dungeons & Dragons I play. I have no inspiring story behind why I started to write. Truth is, I was just bored that day. No idea why I kept going, but it’s been many years now, so I guess this is what I’m doing now.

If you managed to get through all of the above… I’m impressed.
I’m running an experiment to see how little I can stay on topic before I lose people.