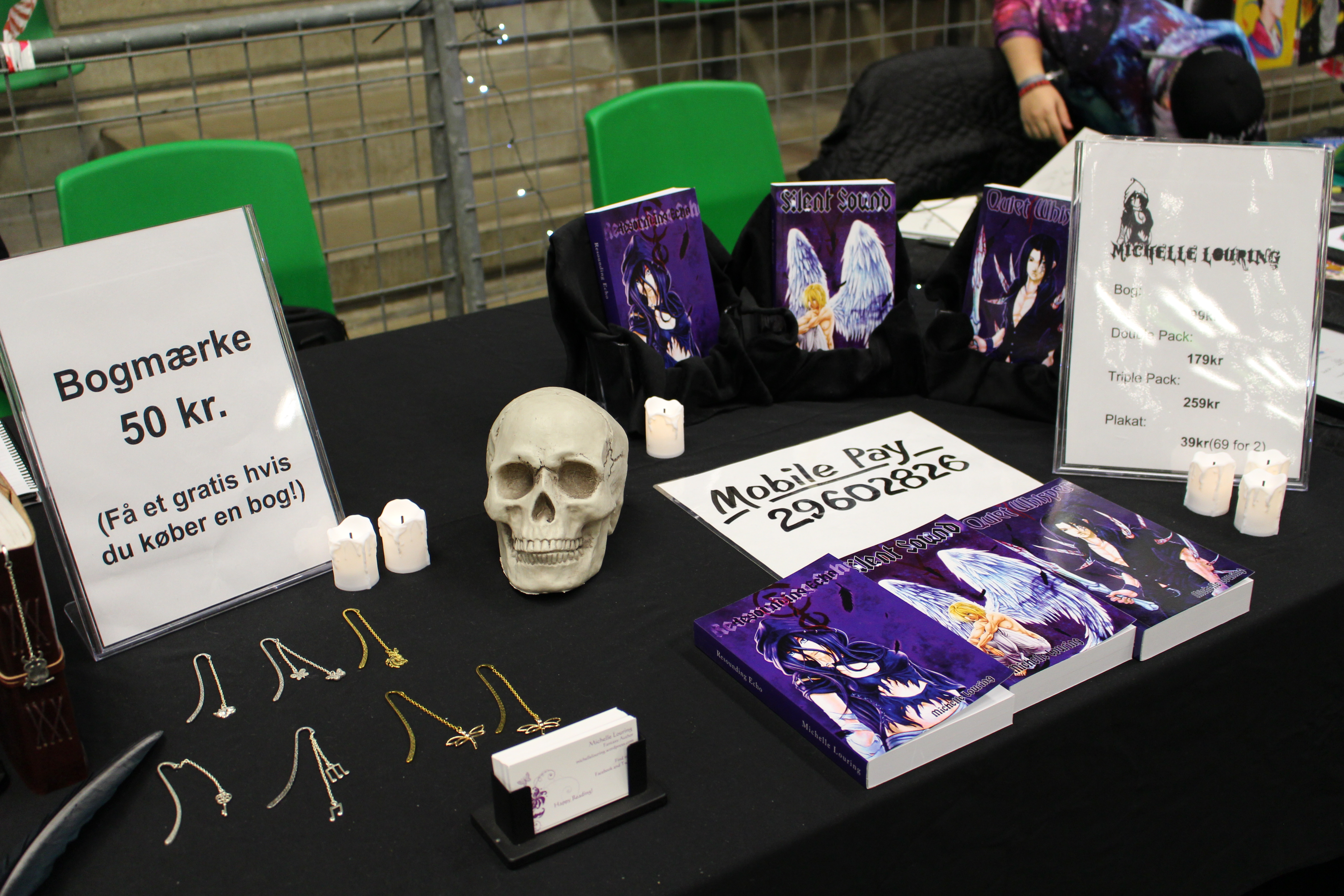 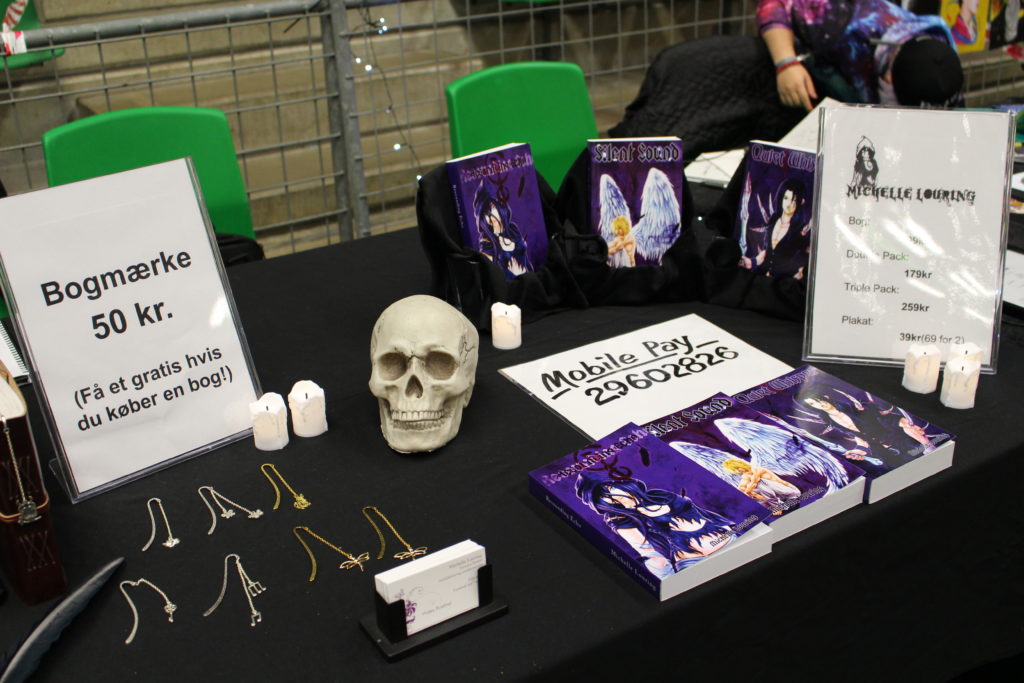 It’s been forever since I did a Con Post (despite many cons passing), so I thought I better tell you all about this weekend’s KoyoCon.
KoyoCon 2018 was held 9.-11. November and should really have been entitled “Michelle Abuse Weekend”.

Over the course of three days I was:

But I’ll get back to that.

I had two jobs during this con: Sell a lot of books at my table in the Artist Alley and help out my friends at the NerdVault booth.
Since this is the last convention I’m attending as an author before releasing Ghostly Scream (and releasing new, rebranded editions of the previous books!) I wanted to really put in an effort to sell a lot of paperbacks. Not only had I fully embraced the con’s Halloween theme, decorating my table with a million LED candles, skulls, bones and other slightly emo items, I had also hatched a plan.
Because how do you con people into talking to you?
You bribe them with candy.

It’s quite impressive how popular your booth gets when you have bought a lot of expensive chocolate and promises a box to everyone who rolls 20 with a die (obviously a 20-sided die. I’m not that evil).

So, apart from an astonishing amount of people trying to buy my decorations, the writer-part of me had a lot of success. Enough about that.

Last year, I might have mentioned that I ended up on the front page of a local paper wearing my Dragonstalker Hunter cosplay.
Turns out that reporters just dig that costume.
This year, a reporter from the local TV station came by my table after having seen the cosplay displayed over in NerdVault’s booth and asked if she could borrow it. And that’s how Hector, my Dragonstalker helmet, ended up opening the news that night.
(Here’s a link. I might also be somewhere in the background.)
Of course, that wasn’t the only time Hector’s assistance was requested, but I’m getting to that in a bit.

I think it’s time to talk about how my friends are bad people.
Yes, this is about the cat ears.

If any of you follow me on Twitter, you might have noticed a weird conversation between my friend Maria and I where she “jokingly” threatened to put cat ears on me.
I should know by now that Maria doesn’t make jokes, she makes promises.

It was Friday night, as soon as I let down my guard. My friend Steffan came by my table and spread his arms to give me a hug. I had no reason to suspect anything.
Little did I know that Maria had recruited him and that he was all too willing to betray me.
While he held me in a vice-like grip, a friend of Maria’s tackled me from behind and OUT OF FRIGGIN NOWHERE Maria appeared with the cat ears.

The lesson here is: Trust NO ONE. 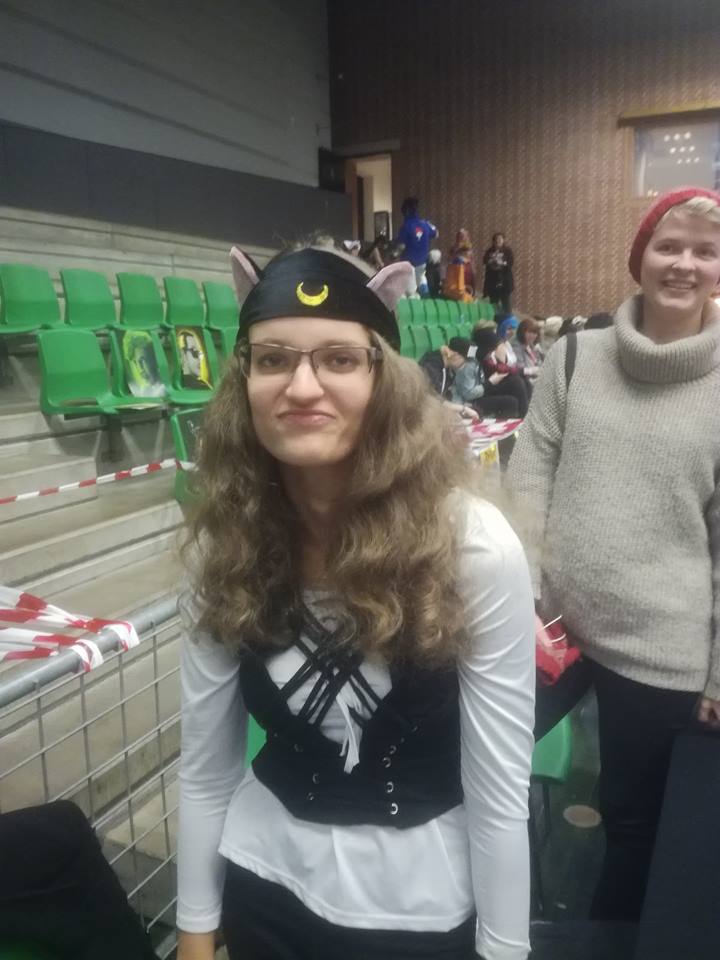 As you might expect, I was rather suspicious of my friends after this. So when this girl I know through previous convention work approached me and asked for a huge favor, I made sure to ask her what it was first.
“I need you to come over to NerdVault’s booth and put on your dragon helmet.”
Since it wasn’t the first time I had had that kind of request that weekend, I felt that was a pretty small thing. It was only after we arrived at the booth that she added:
“Oh, and could you get up on the table and pose for a picture?”
…I just kind of went along with it.
It wasn’t even until I was on the table that I thought to ask what the whole thing was about.
(It was for a photo contest. Meaning those pictures are now on social media.) 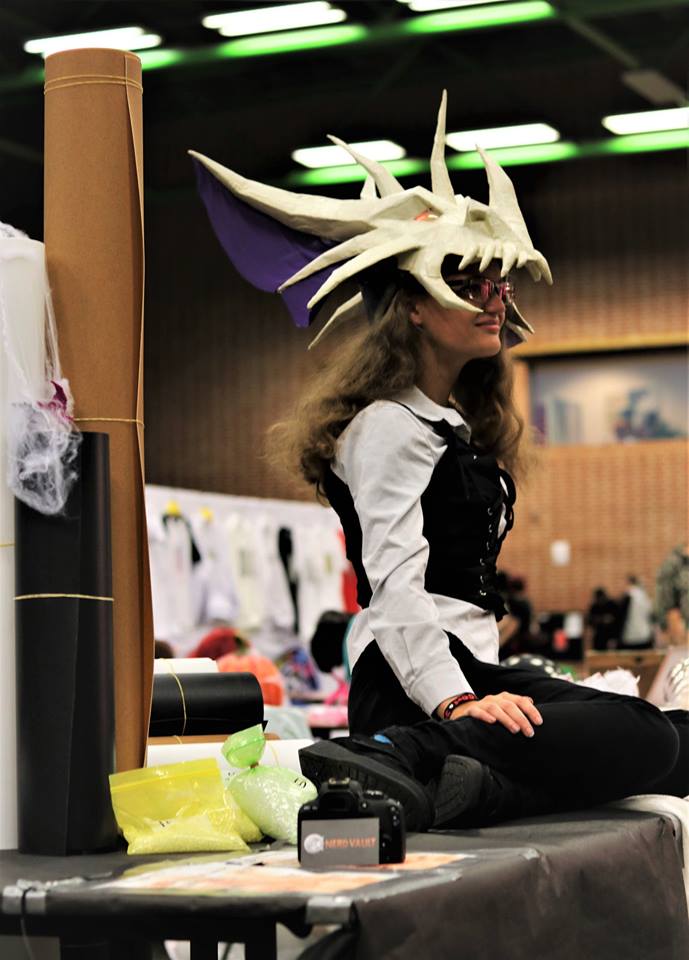 And see, this is just what the people I KNOW put me through. Strangers have no qualms, either.

Saturday night I spotted my friend Emma, and since Emma is a NICE PERSON, I felt like I had a chance for some safe interaction.
I was wrong.
As I approached, one of Emma’s friends spun around, looked at me and said, “Sup, bitch?”
Never met this person before.
I go “Sup? I just wanted to speak to Emma.”
This stranger, who is hardly any taller than myself, PICKS ME UP, like I’m a sack of potatoes, turns to Emma and asks, “What do you want me to do with her?”
Emma, jokingly, tells her to throw me in the trash. Before she can tell Crazy Gal she’s joking, I’m being carried halfway across the hall toward the nearest container with Emma running after her, desperately trying to stop her, while I, for some weird reason, yells “That one’s for recycling!”

…Emma managed to catch up and I was promptly dropped next to the recycling bin, and the only thing really hurt was my pride.

So, yeah. That was my weekend.
Did you do anything interesting?