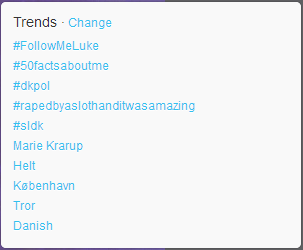 I decided to swing by Twitter to waste a bit of time during my break today. I looked briefly at the Trends panel (something I usually never do) and had to shake my head when #rapedbyaslothanditwasamazing was the first thing that met my eyes. Seriously, what’s wrong with people?!

But that wasn’t the worst thing. To my big surprise, I saw København(Copenhagen) and Danish among the trending words, and it puzzled me, since Denmark normally isn’t of much interest to the international world. And that’s when I saw, to my great horror, the words ‘Marie Krarup’ among the trends.

To anyone unaware of this, Marie Krarup is a Danish MP who visited New Zealand and offended the Maoris quite harshly with a bunch of ignorant and racist comments about their culture. You can read The Daily Mail’s article about it.

I read the article in the Danish news a couple of days ago and actually discussed it with some friends, but I honestly thought that it was the kind of blatant ignorance some politicians spurt out every once in a while, and would just be forgotten in a day or two. Which is why I was very surprised to see it laid out on Twitter, and as a trending topic, no less!

Marie Krarup is a member of the Danish People Party, which is widely known in Denmark as sometimes being borderline racist, but this is stupid even for them. And I can’t express how embarassed I am that this is the view the world gets of the Danish these days! Fortunately, I can tell you that the Danish people are raging against her as well. But still, she refuses to apologize, even though I doubt anyone is on her side.

Krarup says that some of her comments were ‘lost in translation’… I’m not sure exactly what the translation changed in her mind, but the Danish article was pretty bad already.

All in all, a bad day to be Danish on Twitter!