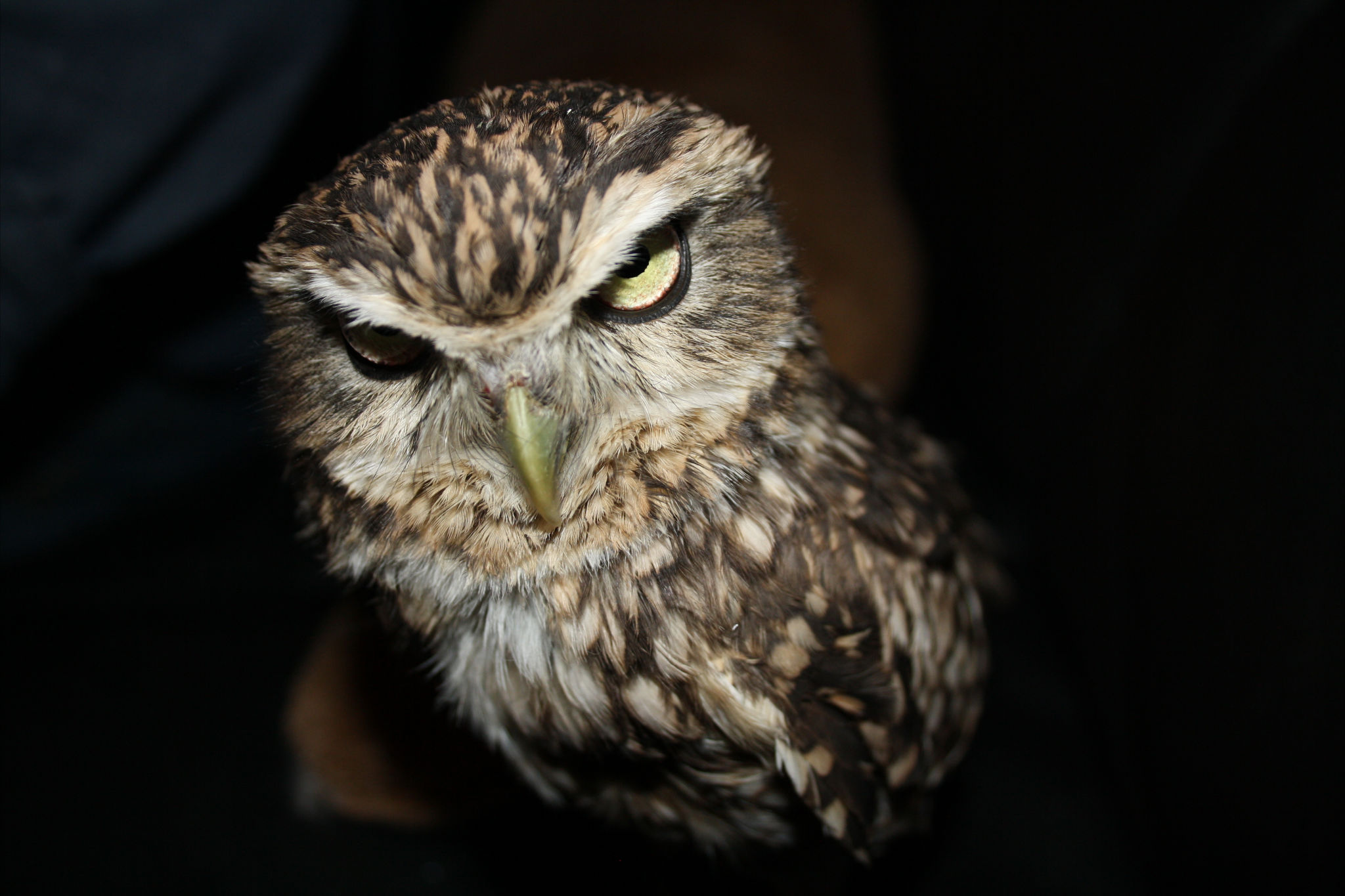 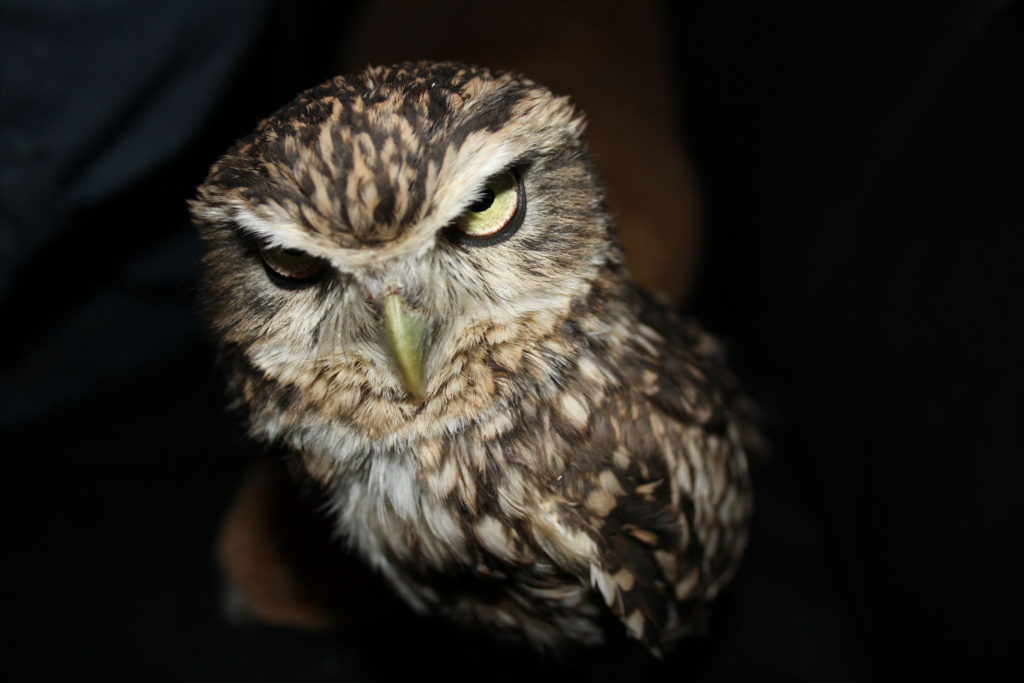 I promised in my last owl post that I would tell you why Artemis is pure evil.

I feel like you deserve an explanation as to why I start twitching when I hear the sentence, “Oh, he’s SO cute!”

Let’s start with the dogs…

As I got him when he was just 3 weeks old, Artemis got to grow up around my parents’ huge, fluffy Samoyed dogs, Aika and Shika. That has had a few unfortunate side-effects, mostly that I now have an owl that barks at the neighbors.

But there’s something truly remarkable about seeing the love Shika has for this tiny feathery creature. And while Artemis is a ball of fury that hates almost everything, he won’t even flinch when a tongue bigger than he is darts from Shika’s mouth and licks him, covering him head-to-toe in dog spit.

You might think I’m describing an adorable friendship between two unlikely buddies. 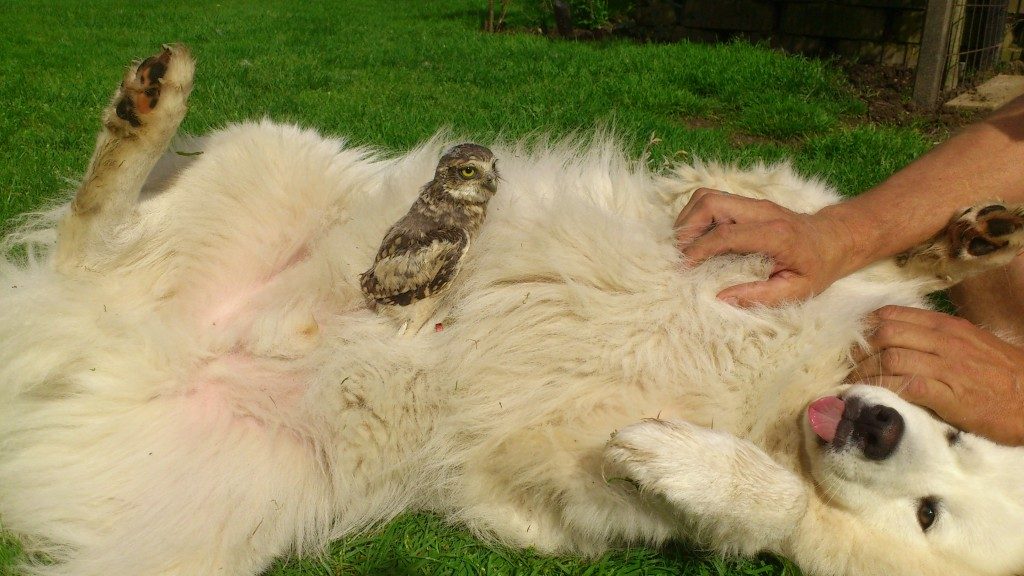 Aika and Shika are BIG dogs, each of their paws enough to crush Artemis with a single swipe. Yet these two fluff balls let this tiny owl TERRORIZE them without ever doing anything to defend themselves.

As I said, Shika adores Artemis. Aika is a bit more wary. That was shown very clearly one day when I was sitting on my parents’ couch, Aika beside me with his head in my lap, when Artemis descended and landed in Aika’s big, fluffy tail. Aika, unsure about how to react, started creeping closer to me, to move away from the owl.
The owl buried his talons in the fluff and just went along for the ride, all casual, even when poor Aika crawled all the way up in my lap to escape.

That’s just one example of all the times Artemis has landed on their heads, bit them on the nose, stolen food from their bowls, etc….

Doesn’t sound too bad? Let me tell you about how good he is at psychological warfare…

These days, I live all alone. Just me and my owl.

This means that there’s very quiet in my house when I’m not playing music and the TV’s not on. That sounds all well and good… until you factor in that my owl is evil.

He will wait until it’s been completely quiet for an hour or two and I have let down my guard. Then he will let out a single, ear-piercing squeak that will make me jump a foot in the air and nearly crap my pants.

He is no longer allowed in the room when I watch horror movies.

And then there’s the general abuse and controlling behavior…

A friend once described Artemis as an abusive boyfriend.

He will act like the perfect gentleman in public, never stepping a toe out of line. When we go out, he won’t make a sound (except maybe a cute little “Uh uuuh” that will melt every heart in a mile’s radius) and he won’t make a fuss at anything (except chihuahuas and furries, but really, who can account for that…?). Everyone is allowed to pet him and hold him. I once had a horde of 8 year old children nearly manhandling him all at once, and he didn’t even flinch.

Which is why now, when somebody asks if they can pet him, I simply tell them:

While nothing (again, disregarding chihuahuas and furries) fazes him outside of our home, EVERYTHING pisses him off at home. Not only will he throw temper tantrums on a regular basis, he’s also unhappy if he can’t keep an eye on what I’m doing. Which means that, unless I’m sitting on my couch near the cage, doing nothing unusual, he will hoot loudly and non-stop. Some days, I can’t even go to the bathroom without a symphony of complaints playing the entire time I’m in there.

I have taken to singing loudly when he does this and it freaks him out badly enough that he goes quiet for a while. I can play this game as well. 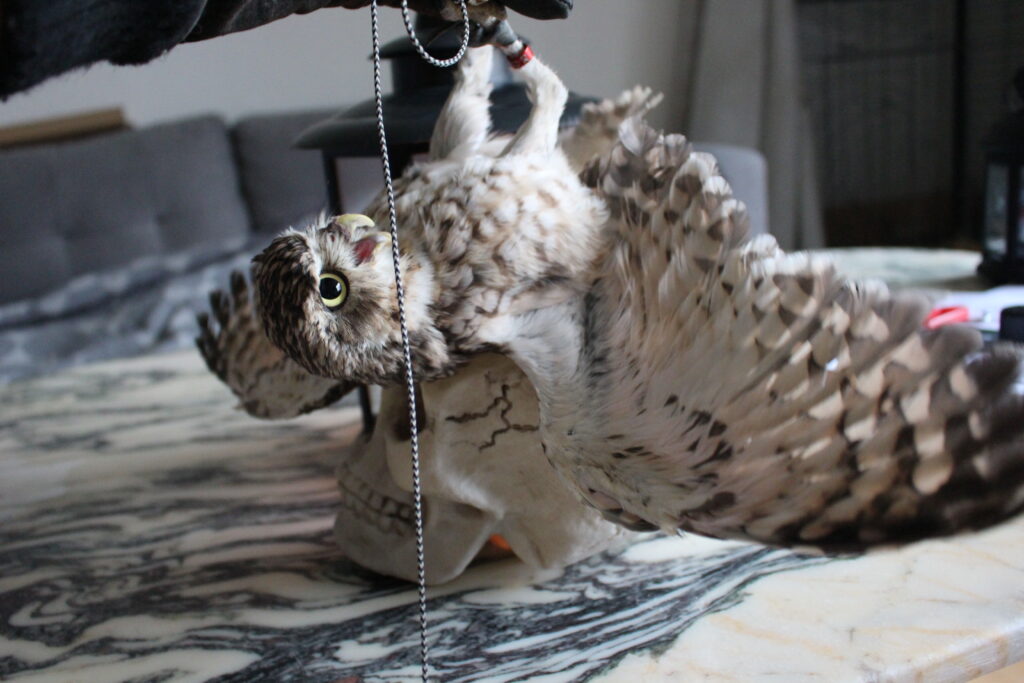 This behavior also applies for when I go to bed. If he hears me moving the slightest (and owls have freakishly good hearing) he will launch into a hooting-session that lasts 30+ minutes at a time. A friend spend the night on my couch ONCE and named him the “Nightmare Howler”.

And if you think this is normal owl behavior: You’re wrong. Owls are predators, not normally in the habit of disclosing their location at all times.

Artemis just didn’t get the memo.

I can deal with the hooting. But him throwing a temper tantrum, screaming until my ears are ringing, every time I use a feather duster is getting a little tiring. This bird is not afraid of dogs the size of small bears, but for some reason things like feather dusters and napkins are the end of the world.

He’s not too fond of Scully from X-Files, either, for some reason. But he likes watching Brooklyn Nine-Nine.