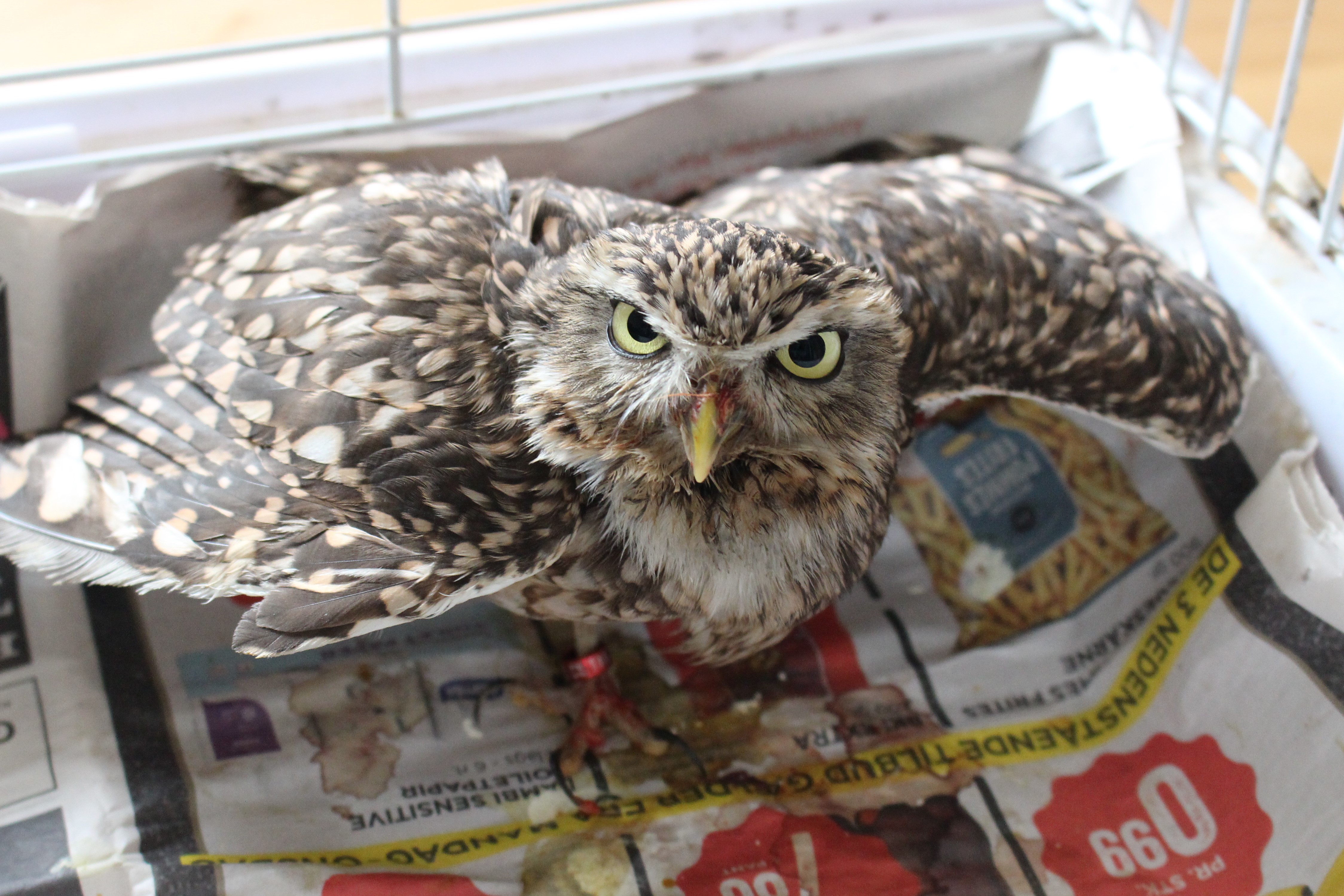 As I have mentioned in previous posts – and talked about at length on Twitter – my owl Artemis has been sick lately. After a couple of weeks filled with worry on my part, and fury from Artemis at having to take medication, this has now resulted in Artemis getting one of his legs amputated.

Before I tell you the full story: He is absolutely fine. The surgery went well and Artemis is nothing if not stubborn, so he’s doing everything standing on one leg, refusing to lie down even when it would be easier. If anything, I would say he’s merely a bit miffed at missing a leg, but otherwise unconcerned.

This is also why all the jokes in this post have been either a way of coping or caused by relief, not because I weren’t going crazy with worry all the way through the process. I am not as heartless as my sense of humor might suggest!

It all started one Saturday afternoon while I was introducing a couple of friends to my feathery overlord, and we noticed that he wasn’t supporting himself on one of his legs. That in itself was not too unusual, since he has always enjoyed playing flamingo, but I decided to keep an eye on him.

On Monday he still wasn’t putting any weight on the leg and I noticed that his talon looked swollen and discolored. I asked my mom to come by in the evening, since it can be surprisingly hard to hold this tiny owl still long enough to get a closer look at his legs. She arrived, and I decided the best way to handle the situation was to give Artemis a bath. This might sound weird to you, but for some reason Artemis becomes far more docile when you drop him in a bowl of water. So I got out my brightly pink wash bowl, filled it with lukewarm water and held him while my mom started washing his feet like he was some kind of emperor. 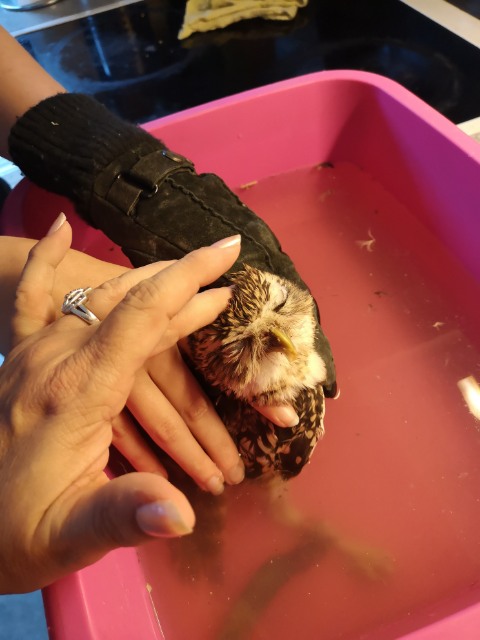 I couldn’t figure out WHAT was wrong, but from the swelling and discoloration it was clear something was off, so I called the vet first thing next morning and made an appointment the following day. When I got to the clinic, the vet took one look at Artemis’s talon and told me it didn’t look good, but that she would like to keep him for a bit to get a better idea of exactly how bad it was. At first we both thought it was an infection, but I had barely been home an hour before she called me and told me it was very serious. Apparently some small hairs had knotted together underneath the leather straps Artemis usually wear around his legs and had cut off the blood circulation, causing necrosis. She said she might be able to save two of his toes, but she didn’t know for sure.

She asked to keep him for at least another day, so I spent the rest of that day desperately trying to distract myself from worrying (as my tweets from that time will show).

It wasn’t easy. At first, I decided to continue my Polish course on Duolingo. But, seeing as Duolingo’s mascot is a small owl that will pop up and tell you you’re doing a good job all the time, that didn’t prove all that effective.

I decided to read a book instead. It just so happened that the book I was reading at the time was Harry Potter and the Order of the Phoenix. And what was the very first scene in the chapter I was at?

Harry going to the Owlery.

Clearly there was a conspiracy going on, so I went to visit my mom. Well, I say I was visiting my mom, but really, I was visiting my parents’ two huge fluffy dogs… We took them for a walk and at one point my mom absentmindedly said, “The dogs have to go to the vet soon as well.” I said, “Huh… I wonder how many legs they come home with.” At my mom’s aghast reaction, I went, “It’s either worrying or turning to dark humor. You just gotta deal with my choice of coping mechanism.”

Because Mikkel only has three legs and he’s freaking badass.

Mikkel is a Shiba Inu and the first time I met him was on one of my and my mom’s dog walks. Now, Aika and Shika, my parents’ Samoyeds, are each much larger than a Shiba Inu and they can get a little overeager from time to time. I was holding both of them while my mom chatted with her neighbor. I, of course, was only interested in the dog. I noticed the missing back leg and told Aika and Shika to “take it easy, because they had a large advantage in the leg area.” Even with that comment, my mother was totally obvious to Mikkel’s disability and that was because Mikkel kept up easily with her two huge fluffballs, totally unbothered by his missing leg. It was not before the neighbor made some comment about it that my mom took a closer look and finally noticed.

But the moment I truly knew Mikkel was a badass was when he had to pee.

Now, his entire back leg was missing. It would have been very easy to just turn that side towards the hedge and do his business. But no, Mikkel, like any other male dog, lifted his other back leg and then peed while walking forwards on his front legs to keep his balance. Like a champ.

So now you know more about Mikkel, you probably see why I took seeing him on that day as a sign that Artemis would be just fine, even if he did lose his leg.

Later that night, I also got a text from my mom that said, “Look at Hoothoot. He does just fine with one leg!” and I wasn’t sure whether that was encouraging or just a sign that my mom’s Pokemon Go addiction is getting out of hand…

The vet kept Artemis for another two days. When I went to pick him up, I told the nurse in the reception that I was there to pick up the Burrowing Owl with the bad talon, and she nearly cooed when she said “Oh yes. He’s a charming little thing, isn’t he?”

I almost asked her if we were talking about the same owl, since the one I was there for was a demon.

He’s my demon, mind you, but a demon nonetheless.

The vet talked to me about the state of the talon and showed me how to give Artemis antibiotics and rub ointment on his foot because I was going to get him home until we knew how much could be saved. She called him a ‘fighter’ and I agreed, even if the expression I personally use is “too stubborn to let anything slow him down”, and I got to take him home.

As soon as we got home and I tried to transfer him from his transport crate to his cage, he made an evasive maneuver and was gone by the time I turned around. I spent 10 minutes looking all over the house for him, until I eventually located him in the bathroom, hiding behind the toilet.

Artemis was clearly done with this shit. 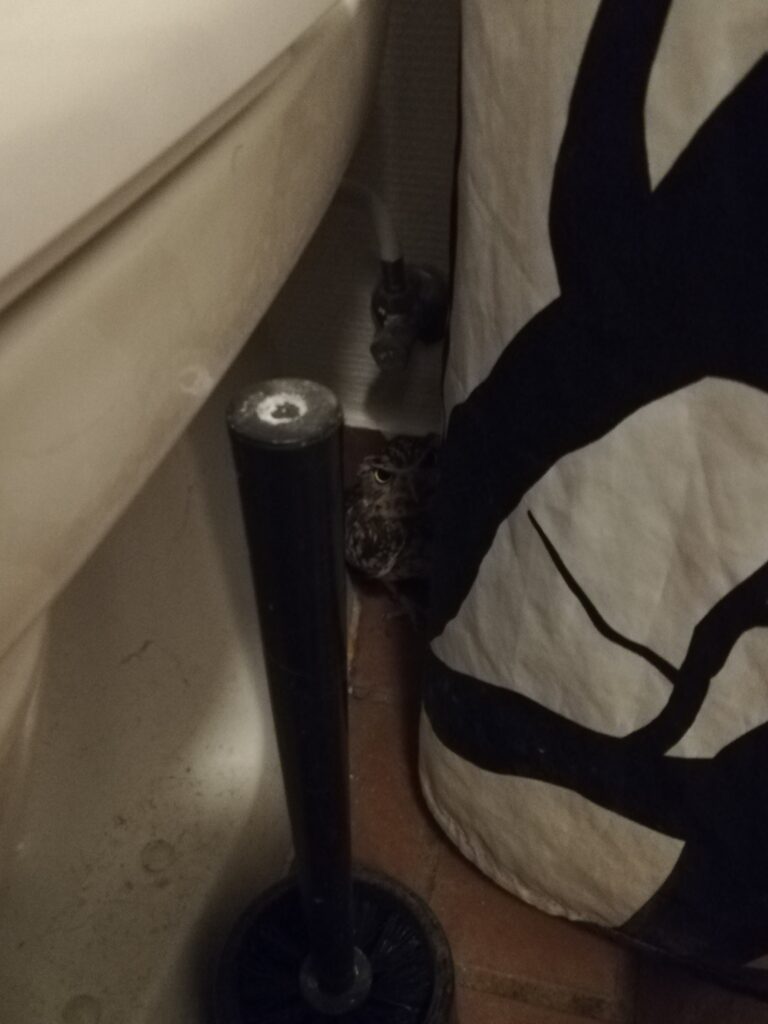 The following two weeks consisted mostly of me forcing a very reluctant owl to take his medication twice a day, sending pictures of his talon to the vet, and constantly calling for updates. Finally the vet told me that there was no improvement and she had to amputate. By that time, I had made my peace with this and all I wanted was to get it over with so my owl no longer had to be in pain.

The vet told me she was going to remove the whole leg, since he had no use for a stump (squashing my hopes of getting him a tiny wooden leg and an eye-patch) and that leaving a stump would just mean he would get pain in it from time to time.

So I dropped him off and made myself sick with worry while I waited to hear something. But he made it through surgery just fine, and when the vet told me he was scowling at her every time she checked on him, I knew my little beast was back to normal.

I got him home already the next day and he was just as grumpy as ever. And as stubborn. When you have only been one-legged for one day, I think it’s fair if you lie down until you adjust to the change. But nobody has ever managed to get Artemis to change his ways, not even some mean vet lady who stole his leg. He did everything standing on his one remaining leg, and admittedly he did it remarkably well. He went about cleaning his tail feathers without ever losing his balance, but it was another matter when he had to rustle them back into place. I spent a good 10 minutes watching my tiny owl stubbornly try to rustle his feathers and nearly knocking himself over every time, hopping around like some feathery pogo stick to keep his balance.

He got back at me for that comment the next day when I came home from work, went to check on him and saw his remaining talon completely raw and bloody. I was already panicking before I realized he had merely covered it in guts from his food…

In case you think I’m kidding, just tell me if this isn’t the face of a bird out for vengeance: 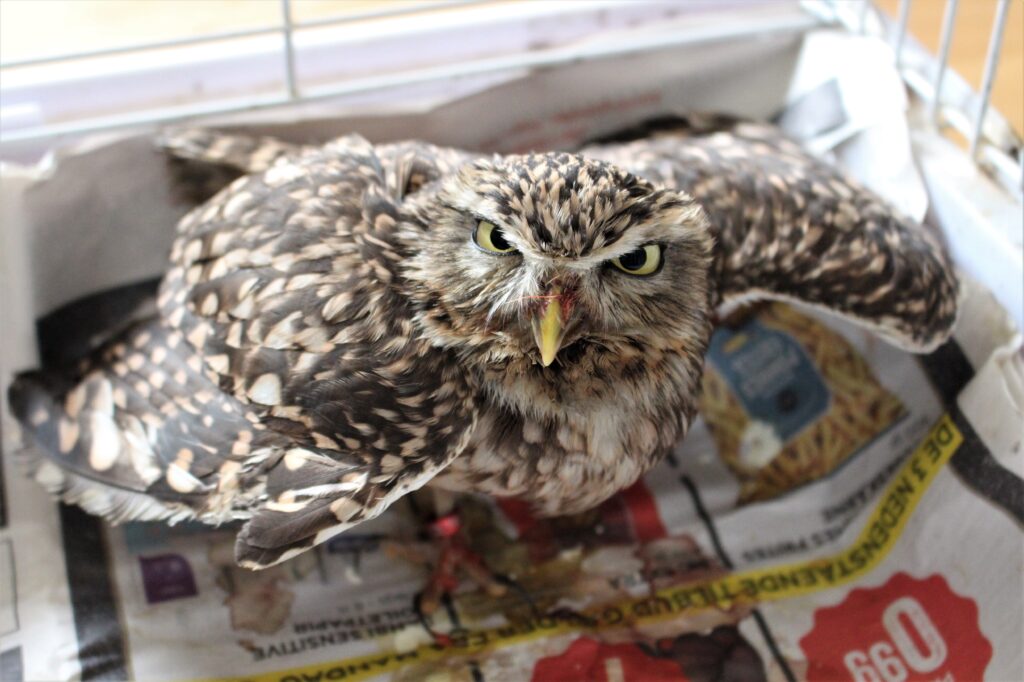 It’s now been three days since the surgery and I’m finally breathing easy. Artemis is still stumbling and falling over when he tries to move around the small cage I’m keeping him in for now, but I’m convinced he will adjust fully in time.

And thus ends the tale of Artemis, the One-Legged Owl. But there will without a doubt be many future adventures.

11 thoughts on “The Tale of Artemis, the One-Legged Owl”