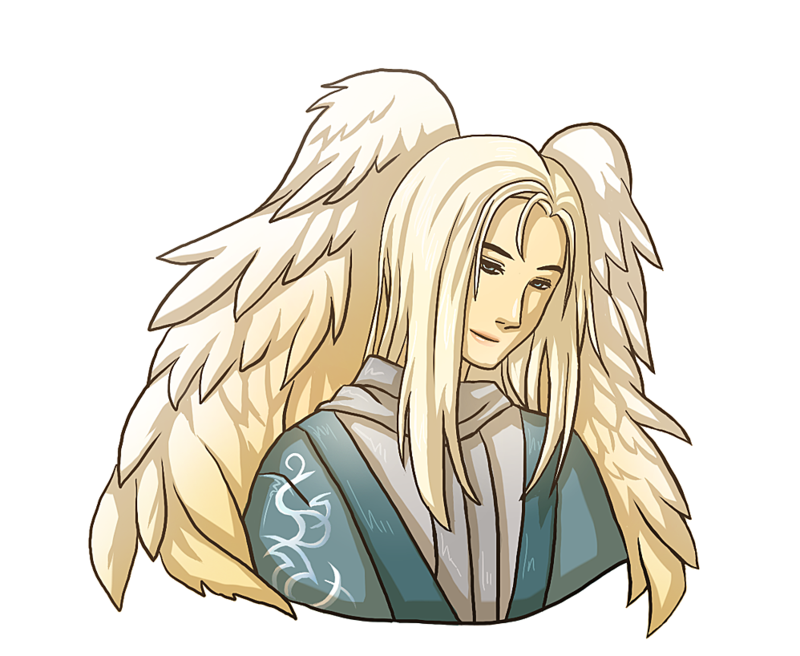 Backstory
Cadeyrn used to be one of the archangels of Sinaria, but sacrificed himself to seal away the demon lord Azarial.
Ever since when, he has resided in a number of human hosts, while the people of Sinaria slowly started forgetting about his existance until no one but the people dedicated to protect his hosts knew his name anymore.

Personality
As a celestial being, he is both detached and mysterious, but acts gentle towards his hosts.

Abilities
As an archangel, Cadeyrn is a being of extreme power. He has almost unlimited magical potential, but because of him having to share a human body, his powers are restricted to how much power the host can wield without dying.

Selissa
As his host, Selissa shares a deep relationship with Cadeyrn. Despite being scared of his presence and power at first, she slowly grew to trust him more than she trusts herself and finds comfort in knowing that he is always with her. She often seeks his advice and Cadeyrn tries to console her when she is feeling lost.

She was standing in an empty garden, but she knew she was not alone.
She looked to the other end of the garden where he was standing, watching her.
He was beautiful. His face was elegant, yet masculine. It was framed by long blond hair, so pale it glistened white in the evening light.
His graceful frame emitted an otherworldly glow, making it clear that he was not human. He was watching her from across the garden with pervasive gray eyes.
She smiled as she crossed the garden towards this beautiful being. Even though she had never seen him before, she recognized him immediately. How could she not? He was part of her after all.
“Where are we?” She asked and spun around herself, suddenly feeling oddly giddy.
“In my temple.” He said, smiling at her childish glee. His voice was light and deep at the same time and sent pleasant shudders down her spine.
She stopped spinning around and looked around thoughtfully. The garden was beautiful and well-kept, and the walls surrounding it showed no signs of decay. This had to be how it looked in his memories.
“Is this a dream?” She asked, still feeling oddly elated.
“No, it isn’t.” He was still smiling.
“But it isn’t real either.” She said lightly.
“What makes you say that?” He asked quietly.
She turned around and gently placed her hand against his cheek. His skin was cool against her palm, and she smiled at him sadly.
“Here I can touch, be close to you.” She said quietly. “If this had been real, you wouldn’t feel so real to me.”
He smiled at the irony, the sadness in his eyes mirroring the look in her own.
“I’m always close to you.” He said and leaned into her touch.
“And still so far away.” She answered with a smile.