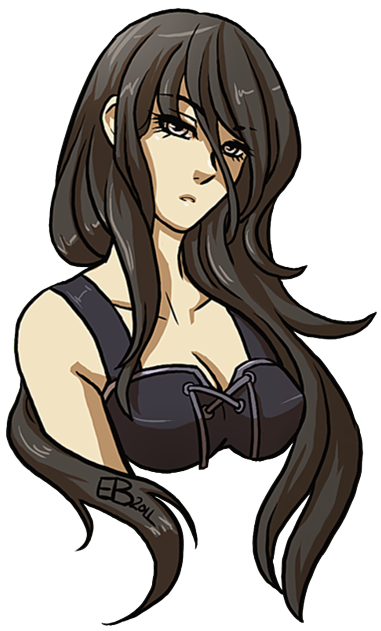 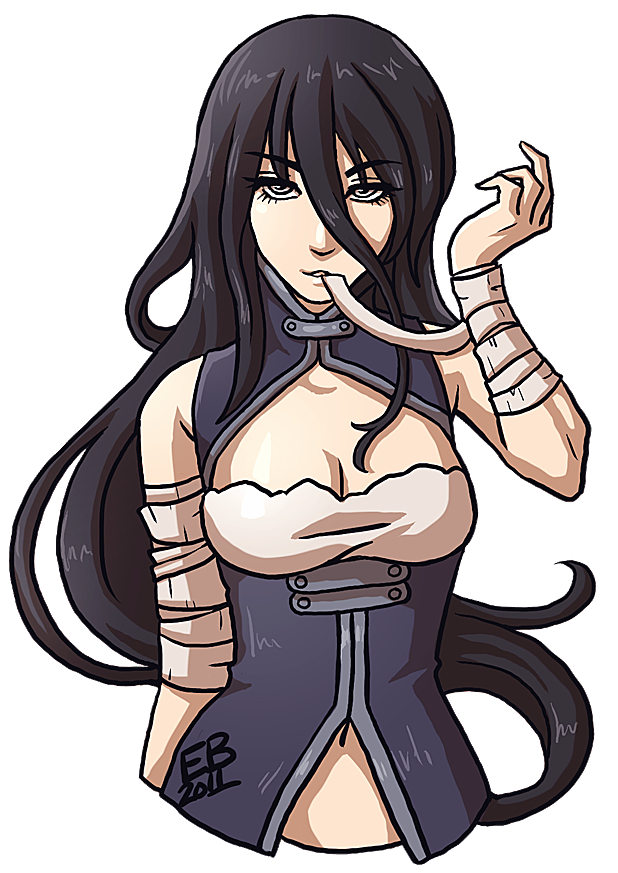 Backstory
Selissa has no memories of her childhood or her parents. The first thing she remembers is lying battered and bruised outside the Temple of Issara, where the resident priests found her and took her in.
Scared and confused, she was hesitant to trust the good will of the priests, but befriended the kind and gentle apprentice Calen who was only slightly older than herself.
While growing up at the temple she found herself becoming an outcast because of her long black hair and strange silver eyes which gave her the appearance of a demon in its human form and made the angel-worshipping residents of the temple wary of her.
She has a large, black symbol covering most of her back, but has no idea what it means or how she got it. No one seems to know its meaning or else no one wants to tell her about it.
At some point she was taught sword fight by a Blade Master who passed through the temple and was given two old twin swords by him as a gift. She finds training with them a great way of blowing off steam and has become a quite adapt fighter.

Personality
In the beginning of the series, she has a fiery temper and more than a little pride. Through the course of Resounding Echo, she matures a great deal and gets better at controlling said temper.
She is aloof and confident towards most people, but playful and caring towards people she likes.
She gives off an attitude of tough love, but it covers over a compassionate heart which can’t help wanting to save those that need her help and a lot of insecurities about her lost memories.

Abilities
She’s very capable at sword fight and hand-to-hand combat. She carries two old twin swords with long red ribbons hanging from the hilts.
She’s a sorceress, able to draw on the magic energy of Cadeyrn. Her magic manifests as white flame-looking light, which she can make cover her hands or her entire body. She can also channel it into her swords, strengthening the steel, or into blasts of energy.
She can use it in battle to harm her opponent, but also for a number of other things, for example subduing demons and making them her servants.

Cadeyrn
She is the host of the exiled archangel Cadeyrn. When she first discovers that she can talk to him and use his abilities, she’s terrified and refuses to have anything to do with him.
She soon discovers that she doesn’t need to be afraid of the abilities being an archangel’s host gives her, and despite only being a presence in her mind, Cadeyrn becomes the person she trusts more than herself.
She often talks to him in her mind and asks him for advice and guidance. Sometimes he appears before her in a dream-like state, when he feels that she needs his help.

Ardeth
The first time she meets Ardeth, he’s part of the Demios Clan and tries to kill her in order to fulfill his orders.
Soon he finds that helping Selissa is more interesting than working for the Demios and much to her confusion offers to help her defeat them.
They share a strong mutual attraction, but the fact he used to be her enemy and is a cold-blooded killer keeps Selissa from giving in to his advances.

Seymour
Upon meeting Seymour, she believes him to be an angel of death, too beautiful to be human.
Because of their strong connection to the angels, they develop a strong understanding for each other and Selissa is confused about her feelings for him.

A sigh broke through the silence. On the roof overlooking one of the temple yards sat a young woman. She was the only one up, and she sat so still that no one would have noticed her, even if she hadn’t been.
Selissa shifted slightly. She had been sitting there for hours already, and her back was starting to get stiff. She knew that the priests would reprimand her for sitting out all night, just like they always did, but she couldn’t bring herself to care.
A cold wind blew through the yard and made Selissa’s long, black hair fall into her face. She absentmindedly led a hand to her face to brush it away. The cold didn’t bother her. It helped chase away a very different kind of chill.
The nightmare was still vivid in her mind. It had plagued her for as long as she could remember. Ever since she first came to the temple.
How long had it been since then? Five years? Six? She couldn’t quite remember anymore.
Ghostly images still flashed through her mind when she closed her eyes. A dark room, filled with whispering voices. It was always the same. In the nightmare she was surrounded by cloaked figures. She would never see their faces, but their voices haunted her even during the day. A constant whispering, like they were chanting. A sudden pain shooting through her body, as if Hell itself tried to burn its way through her back.
She never saw what happened at the end. She would always wake up in cold sweat, as if the pain had been real, the chanting still resounding in her mind.