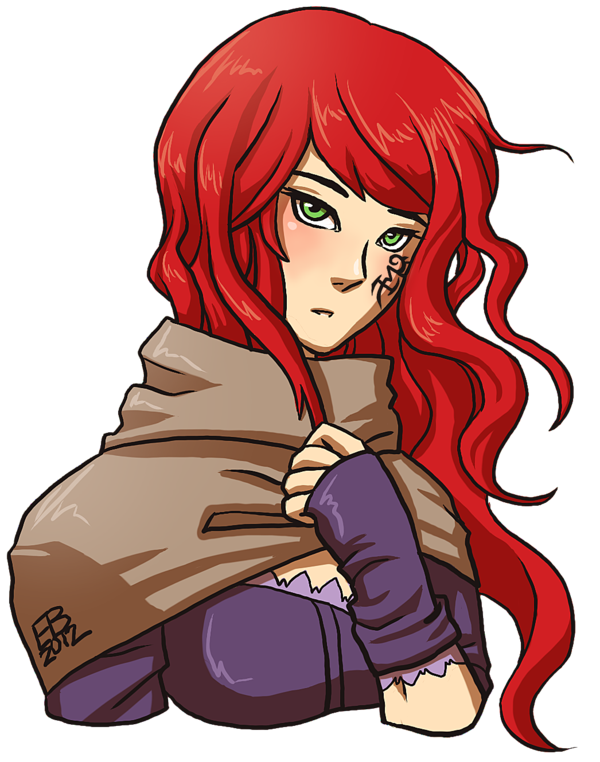 Backstory
Nadia’s parents were killed by Ver’dohnian soldiers when she was very young, and she and her brother Nijel had to fend for themselves.
Because of her ability to foresee a person’s death, she got the Mark of the Cursed tattoed on her cheek, marking her as an outcast.
Her and her brother had to flee the war-torn areas of Ver’Dohna and traveled to the temple of Issara to seek sanctuary.

Personality
As a child, she was very shy and scared of strangers, because of the resentment people held towards her because of her mark.
As she got a little older, she gained more confidence, but still retained her gentle behavior and unwillingness towards violence.
Living as a refugeé has toughened her up and being an outcast has given her a complete distrusts of strangers.

Abilities
She is psychic and able to predict the death of someone she’s met. She doesn’t see them dying, only their bodies after they’re already dead.

Selissa
Nadia met Selissa when she was 13 and was surprised by the fact that she didn’t judge her because of her mark. After having been saved by Selissa from angry villagers, she starts to admire her greatly.

Nijel
Her brother is the only person she truely trusts, because he has always protected her.

She watched as the people approached, most of them shooting wary looks around them.  By now, paranoia was so deeply settled in them that it would probably follow them for the rest of their lives.
A young girl stumbled on the road and fell to her knees. The hood on her ragged cape fell from her face and long, bright red hair spilled out from it. But it wasn’t her hair that caught Selissa’s attention.
On the girl’s face, right under her left eye, a black mark was tattooed. Even though it was the first time she had ever seen someone with such a tattoo, she recognized it immediately.
The Mark of the Cursed… She had once seen a picture of it in one of the library’s books, but never thought she would meet someone who was Marked themselves.
The Mark of the Cursed got tattooed on people who were influenced by demonic magic. They were considered outcasts and were often hunted down when people saw the symbol on their cheek.
A boy, probably a few years older than the girl, helped her to her feet. Selissa noticed that many of the temple’s residents who were passing by were staring and whispering among themselves. The red-haired girl lowered her head and tried to look as small as possible. The boy kept his hand on her shoulder and glared at the nearby people, who were suddenly in a hurry to get to their destinations.