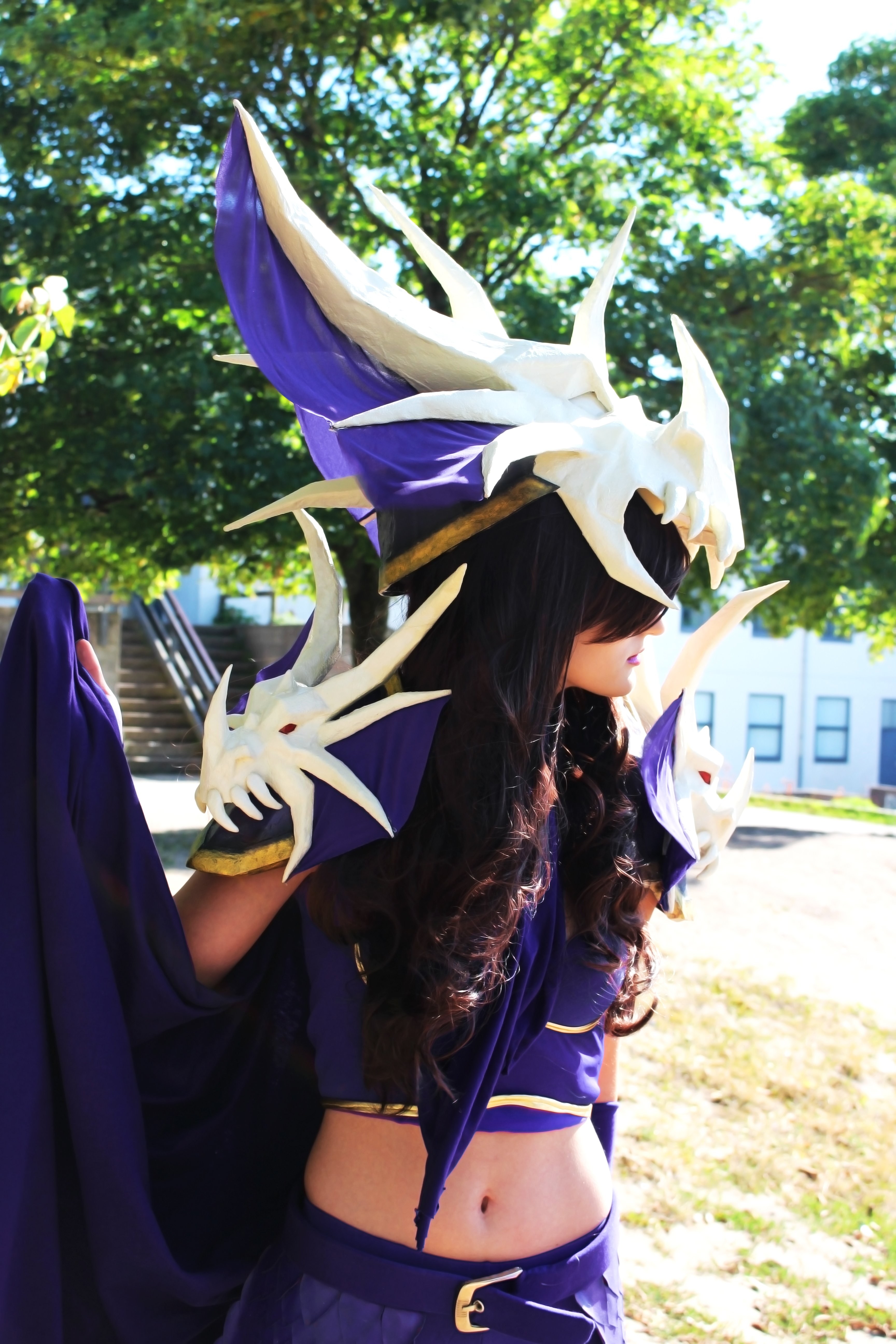 Bookish, non-geeky people: You have my permission to leave. We’re going full geek now and I know some of you have mistakenly made your way here, looking for some deep insight on writing.
You were deceived.

On to the geekiness!

I decided I wanted to make a post about my Dragonstalker cosplay. No real reason, except to keep this blog alive and as an excuse to post pictures of me looking pretty enough to distract from the fact that I’m wearing a dragon as a hat. In public. Like an idiot.

Might just do one of these posts for each of my cosplays (if I get around to it). 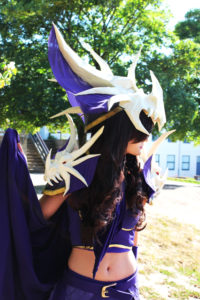 *not really a character, but rather just an armor set.

I only really stayed true to the original design for the helmet and pauldrons. I went with the game models for those, then made a redesign of the outfit based on the artwork of the armor set from the Nordrassil Scout card in the WoW Trading Card Game (yeah, that was a thing at one time). 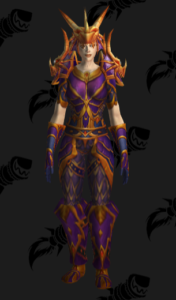 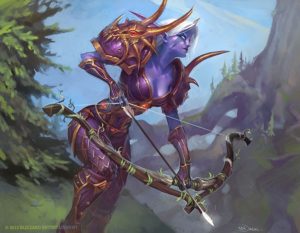 Story behind the costume

Most of the time, my cosplay projects get started because I fall in love with a character.

With this one, I sort of got tricked into making it.

It began because a couple of friends had promised to teach me and a few other mutual friends how to do Pepakura. I was asked what I wanted to make for my practice project and I went with the helmet for the Dragonstalker armor set, because, well, I like dragons.

I repeat: I was just going to make the helmet.

We made a whole day out of our Pepakura lesson and before I knew it, the entire group has made plans for how I should do the various other pieces of the armor set, now that I was doing the helmet.

No one asked for my opinion.
Now I have a box full of dragon skulls.

(Also, I got home that night at 1 am with more stuff than I could carry and a dragon on my head, yet none of my neighbors have tried to discuss my alcohol problem with me…)

Now we’re getting into the technical stuff.

FYI: The helmet is named Hector, while the pauldrons are called Gunnar and Otto. This is not strictly relevant, but it’s important to me.

As mentioned above, the helmet (and the pauldrons) are made from Pepakura. If you’re the least bit normal, you, of course, have no idea what the hell I’m talking about (don’t worry, I didn’t before starting this project, either. That’s how I got into this mess).

Let me explain: Pepakura is basically a crafting technique where you make a pattern from a 3D model. I’m not going to get TOO technical, just know that you can take a 3D model of anything and convert it into a pattern you can print onto thick paper and then cut out and put together, like an advanced jigsaw puzzle that you WILL accidentally glue yourself to every 5 minutes. 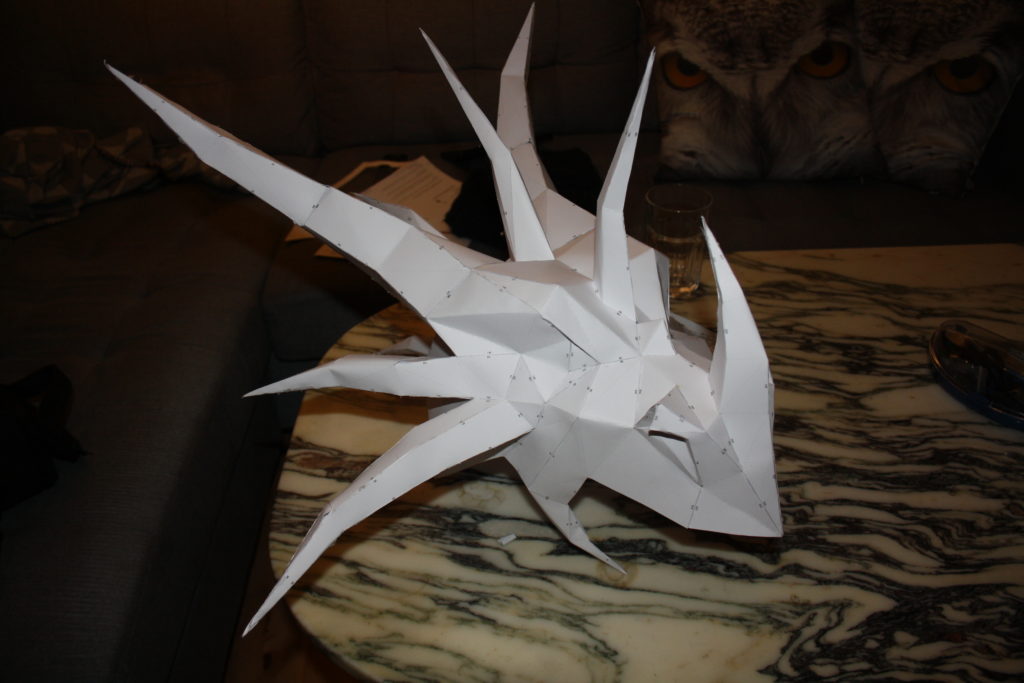 They’re surprisingly sturdy for something made entirely of 250g printing paper and super glue. But considering how often my mom has accidentally kicked Hector (every damn time she visited, no matter where I put him), more work was required.

To strengthen the paper, I covered the finished models in polyurethane resin, and yes, that is as toxic as it sounds. The resin hardened the paper (and probably cost me a few brain cells), and at this point I had a very sturdy set of dragon skulls, but I still did took it one step further and covered them in the thermoplastic material Worbla. 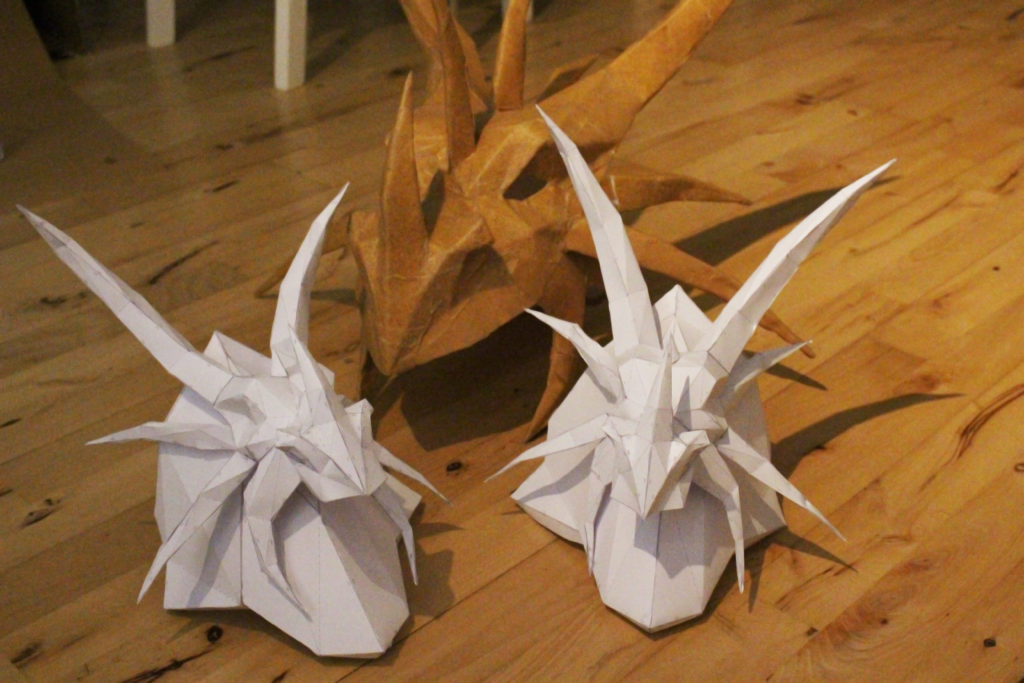 Then I spent a crazy amount of time on priming and painting. I accidentally painted Hector purple the first time around and I still haven’t figured out how that happened.

The finishing touches were making scales out of some very thin fabric, as well as wiring up a couple of LEDs in Hector’s eyes, so he looked nice and ominous in a dark room.

(I had a picture of this, but after scouring 3 old hard drives, 5 different cloud storage accounts and 2 old SD cards, I gave up on finding it)

The pauldrons are attached to my shoulders with simple leather straps. 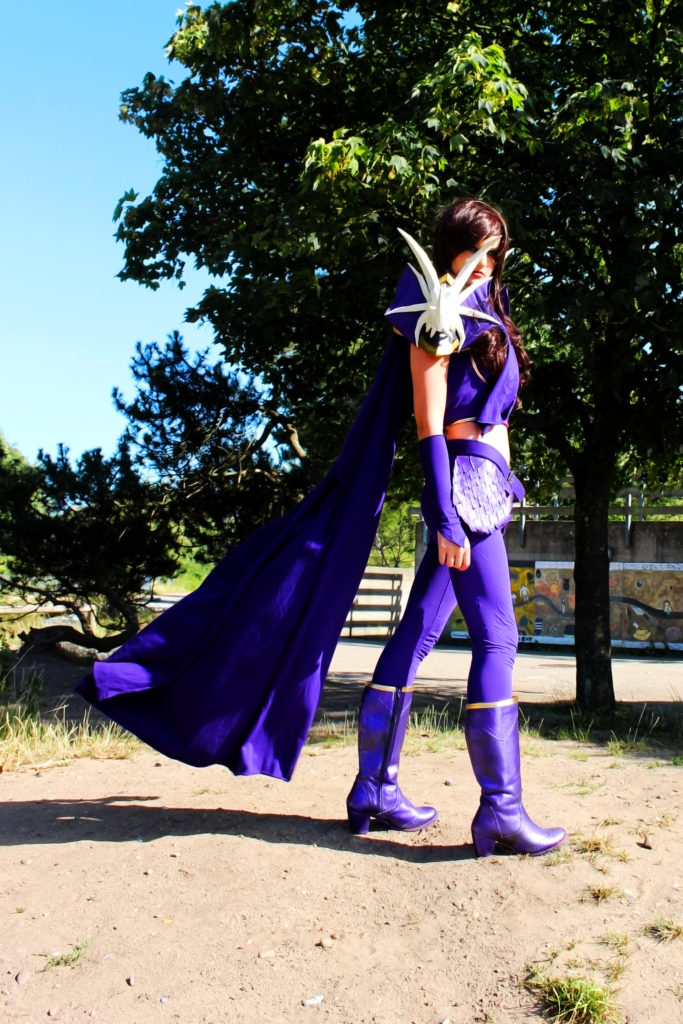 I’m not going to get into too many details here, because I seriously half-assed everything but the helmet and the pauldrons.

The top is made by stretchy fabric sewn onto a bra, and somehow it was far worse for my health than the toxic fumes required for the armor parts.

In the end, I ditched my other ideas for pants (though not before a friend got some rather embarrassing photos…) and went with a simple pair of leggings and just attached some scales (made from painted pleather) to the belt to make it all look less boring. 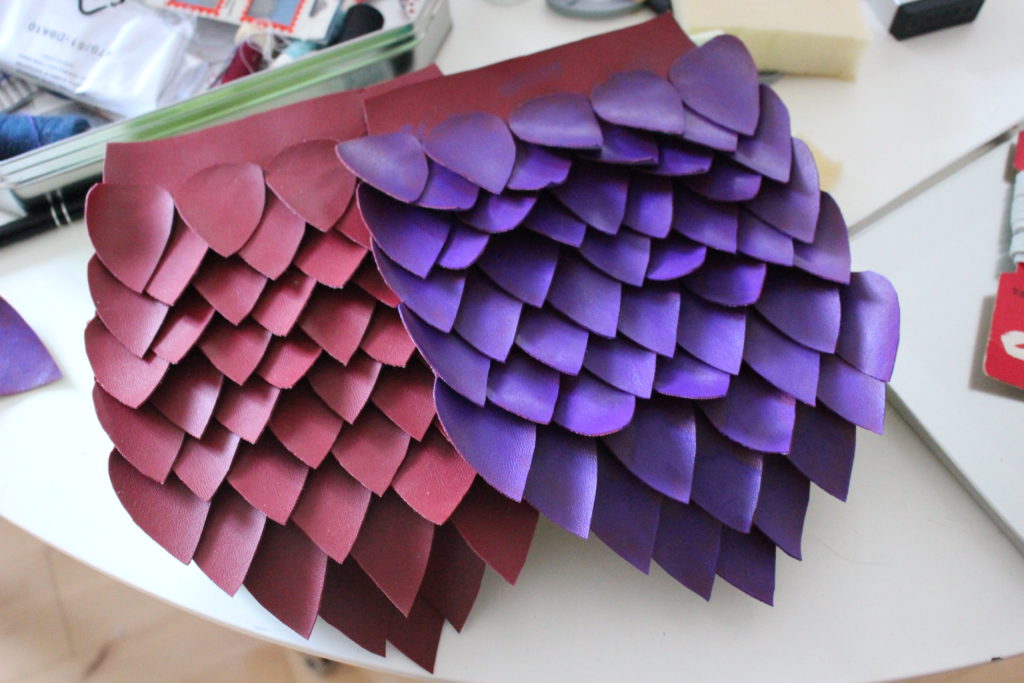 By the time I got to the boots, I was just about fed up with sewing. I had intended to sew boot covers for a pair of leather boots I had bought, but I lost my patience with it and just spray-painted the damn things purple and glued a bit of golden fabric around the top.

The cape is literally just a square bit of leftover fabric that I put through a d-ring on a whim. But it FREAKING WORKS and I feel fabulous wearing it.

All in all, the outfit ended up looking pretty good despite the horrifying lack of craftmanship that went into making it. But I might still make some improvements in the future.

Every cosplay have some funny memories attached to it.

This is one of my favorites, because this one has MANY funny memories attached to it.

There was the time I randomly started to recite Hamlet to my dragon skull helmet during a photoshoot: 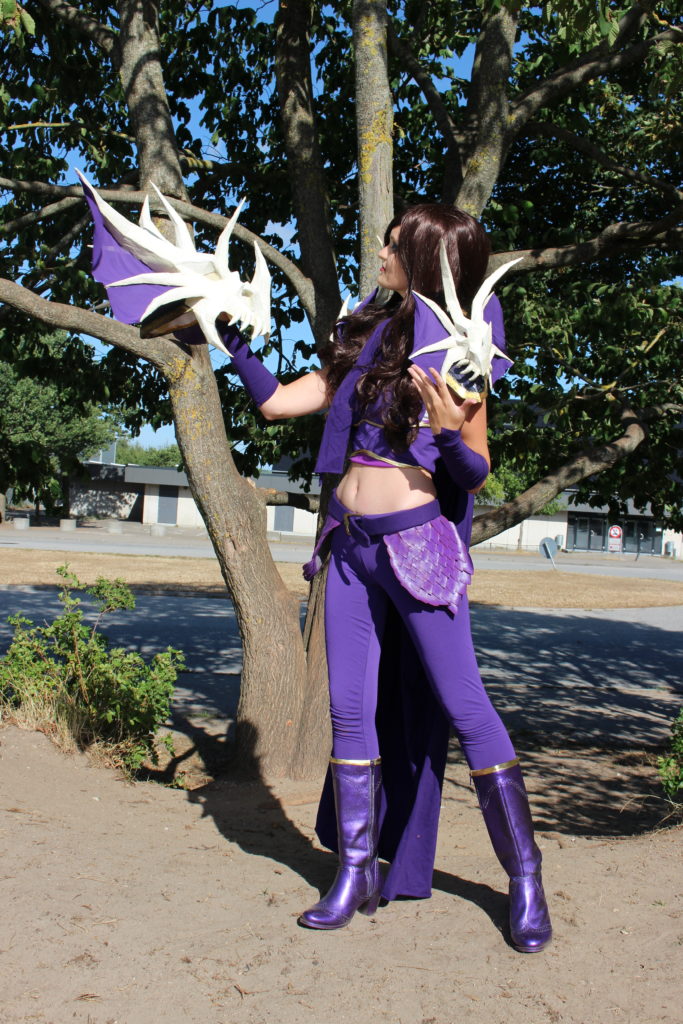 Or the morning of the day it had its debut at KoyoCon 2017 where I was talking with a friend in the bathroom while applying makeup, she asked me what cosplay I was going to wear, and the following exchange happened:

Me: “I’m going to wear Hector.”
Friend: “Who’s Hector?”
Person at the sink to my right who I didn’t know: “That’s probably her owl.”
Me: turns to the stranger and blinks stupidly for a while
Me: “Eh, no… The owl’s name is Artemis. Hector is my Dragonstalker helmet.”

This is also one of the stories I tell when talking about how I’ll never be recognized as an author, but my reputation as “The Girl with the Owl” is well-etablished…

And to further my image as a weirdo, I did end up giving an interview to the local paper, dressed in this cosplay, later that day. It was only a few days after the con, when one of my mom’s

coworkers sent her a picture of said paper, that I found out they had put me on the front page… 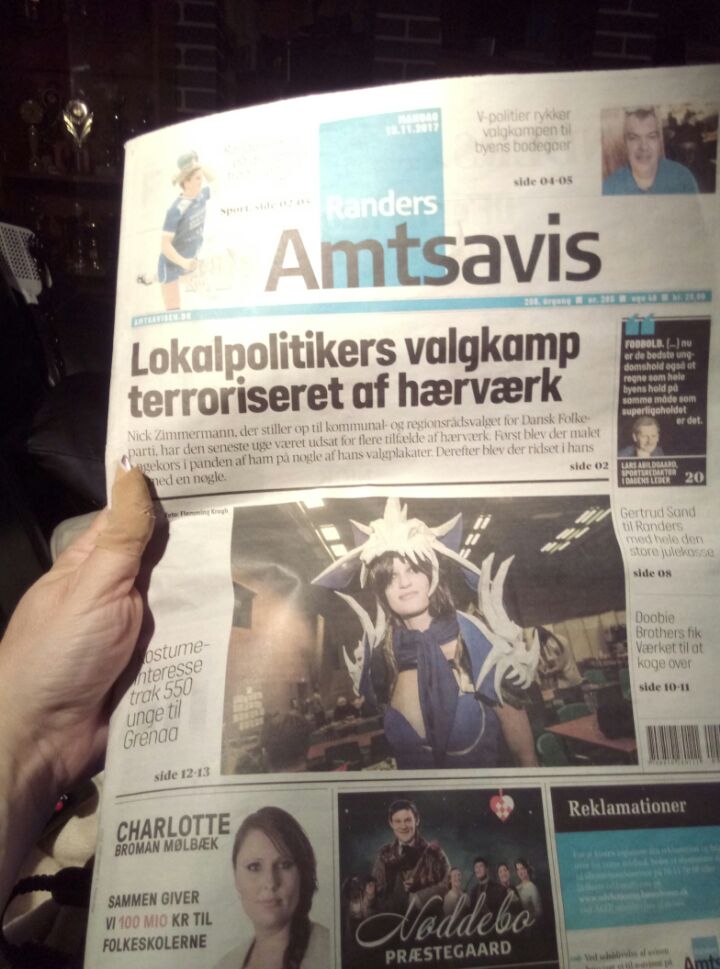 Turns out, journalists just love Hector, because a year later, at the very same convention, I had lent him, Otto and Gunnar to be used for exhibition at a booth located at the opposite end of the hall where I had my author table and I was barely done setting up before a reporter from the local TV-station came up to me and asked if she could borrow him for their opening segment that night.

So, yeah, I made a dragon hat that has become a local celebrity. Remember to include that in my obituary.

See more pictures of the finished costume on the Cosplay-page.