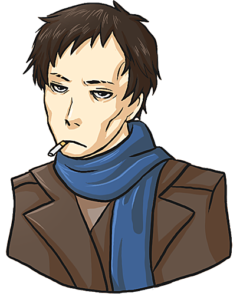 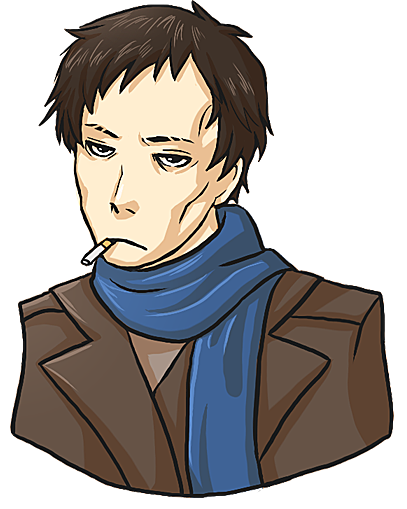 Backstory
Very little is known about Alassane before we meet him in Resounding Echo. His past is shrouded in mystery.

Personality
Alassane is very sarcastic and generally rude to everyone he meets, which often gets him into trouble. He has no qualms about insulting anyone, especially Selissa who travels with him.

Abilities
As a result of being the victim of necromancy, Alassane is capable of using powerful magic.

Selissa
Alassane and Selissa have a strained relationship. He sees her as a temperamental brat and she finds him utterly infuriating. Though they travel together, there’s a rift between them because Selissa knows he is keeping secrets from her.

Cadeyrn
It is revealed that Alassane is the former host of the archangel Cadeyrn, making him deeply involved with the angels.

As most others had already left, Calen started to walk towards him. She heard him greet the cloaked man, who merely nodded as an answer.
Calen started to walk towards the temple halls, the stranger following right behind him. Calen smiled at her and acknowledged her with a nod as he walked past her. Selissa barely noticed him, her eyes never leaving the other man. As he strolled closer, he lifted his head and for the first time she saw his face.
A pair of dark, intense eyes looked back at her. The face under the hood was pale, framed by dark brown hair. His cheeks were sunken and the skin was practically stretched across the bones. If it hadn’t been for the intense look in his eyes, she would have thought she was looking at a walking corpse.
Suddenly his eyes met hers and her entire body went rigid. A strange feeling went through her, a feeling of recognition. Like she was supposed to know this man…
His eyes bore into hers, and he didn’t look away until he and Calen were past her. Selissa watched them disappear around a corner, too shocked to move at all.