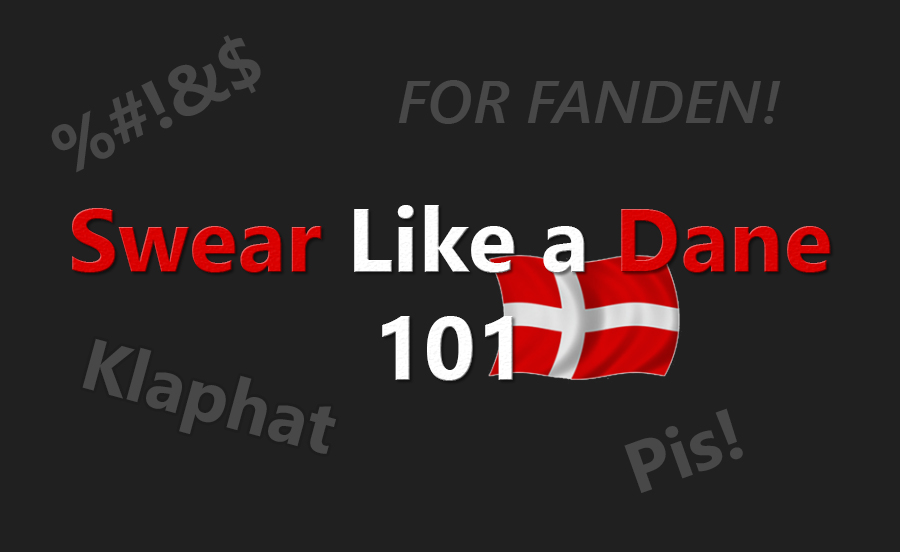 Over the last year, I have, for some reason, ended up teaching people online Danish swear words. On several separate occasions. Not sure how it keeps happening, but now I’m leaning into it.

Time for ‘Michelle’s Guide to Swearing Like a Dane!’

First of, I got to admit that even though Danish has a lot of unique curse words, we have been ruined by American culture, just like just about everyone else. ‘Shit’ and ‘Fuck’ is an integrated part of the vocabulary of anyone above the age of 5 and below the age of 60 (but we’re a lot less sensitive about it. You won’t see our movies get higher ratings just because of cursing, and the dialogue in our reality shows isn’t just a series of beeps).

So a lot of the following words and phrases might not be as commonly used as their English counterparts, especially by the younger generation.

It also means that if you go to Denmark as a British or American person, you’re going to be horrified at how casually we use your dreaded F-word. No matter when I finish and publish this post, I can promise you that my mother will have told me to fuck off within the last month.

(Last time it was because I caught a shiny Pokemon that she didn’t have in Pokemon GO.)

Literally: For the Devil

This is a nice versatile one. It’s used in the same way as ‘for fuck’s sake’, but isn’t considered as crass. The milder version is ‘For Søren’, which, considering my uncle’s name is Søren, you would think would be used like ‘For Pete’s sake’, but mostly it’s used in place of ‘Oops’…

‘For fanden’ can be freely substituted with ‘For satan’, but it needs to be said with Danish inflection. Otherwise, it sounds like you’re actually worshipping Satan.

(You can also use ‘For helvede’, meaning ‘For hell’. We’re not picky with the term, as long as it’s clear that your allegiance lies with the guy down-under.)

Variation of ‘For fanden’. Used in the same way as ‘Shit’ or ‘Fuck’.

Literally: The Devil take you

This one is not as commonly used as the two variations above these days, but I just wanted to show how much shit we give the Devil, considering nearly none of us are religious.
It’s probably obvious, but this is used like ‘To hell with you’.

Can be substituted for ‘Pis’ (I’ll let you guys figure that one out).

These can not be used on their own, but are often used in front of all kinds of unrelated words to exaggerate them (and add a touch of vulgarity to otherwise innocent statements).

This is another versatile one. It’s used like Brits use ‘bloody’ and Americans use ‘fucking’ when put in front of an adjective. If someone is ‘bloody annoying’, a Dane would call them ‘pisseirriterende’.

Can be substituted for ‘skide-‘.

Literally: ? (I have absolutely no idea)

I’m not even sure there’s an English equivalent for this, but I use this word at least 30 times a day. You add it to a sentence after the verb a bit like you would inject ‘actually’; only it’s considered a little bit crude and it’s not a warning that mansplaining is about to happen.

You’d lightly scold a child for using ‘sgu’, but it’s not really considered inappropiate. I use it both at work and when talking to elderly relatives.

Some of these aren’t even considered vulgar, but they’re satisfying nonetheless.

This is my favorite. Not because it’s one I use all that often, but because it confuses foreigners who google the term.
Used in place of ‘Idiot’.

Mild way of calling someone an idiot.

This one is considered more crass, but sometimes you just gotta let a power idiot know they’re acting like a power idiot.

Used like ‘Moron’ or ‘Retard’, but without being an offensive term for people with learning disabilities.

(We got those, too, but I won’t include them. I’m only teaching you terms you can use without being a giant Kraftidiot.)

Danish also uses words for ‘bitch’, ‘whore’, ‘pig’ and a variety of sexual slurs for swearing, but they’re mostly used by teenagers and people who got dropped on their head as children, so I’m not going to teach them to you. I prefer my cursing to have a certain amount of dignity.

So see you later, klaphatte! 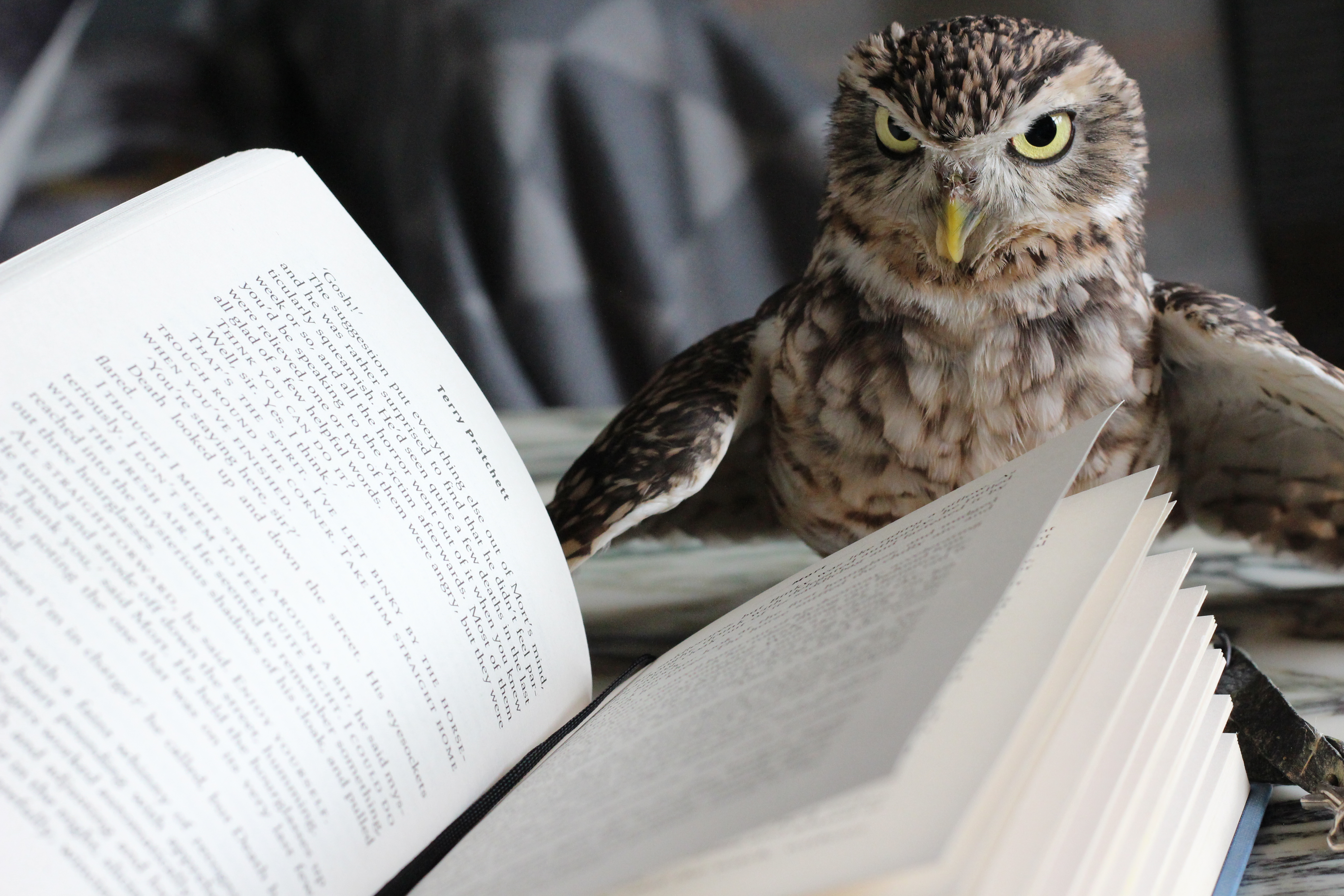 The title is not a metaphor. That is really what I’ve been doing lately.

…No, I’m not THAT lonely. There’s a perfectly sensible explanation.

You see, even though I’m fluent in English and can write entire books, my English pronounciation is horrible. I might read, write and watch TV almost entirely in English, but, being born and raised in Denmark where I still live, I almost never speak English. Meaning that even though I can write a book, I sometimes struggle to get through a simple conversation.

And it’s stupid words I can’t pronounce. I have absolutely no problem saying words like ‘mischievous’ or ‘auspicious’ (words I can’t spell right on the first try), but ‘brother’ and ‘area’ makes my tongue tie itself in knots. Seriously, who struggles with area?!

It’s getting a little embarrassing (also a weird word I can say just fine!), so I figured the only way to fix the problem was to practice. And reading out loud to my owl seemed more convenient than calling up friends and forcing them to talk to me in a foreign language.

Also, it freaks out Artemis much less than when I sing to him.

So, um… does anyone have any book recommendations suitable for owls? 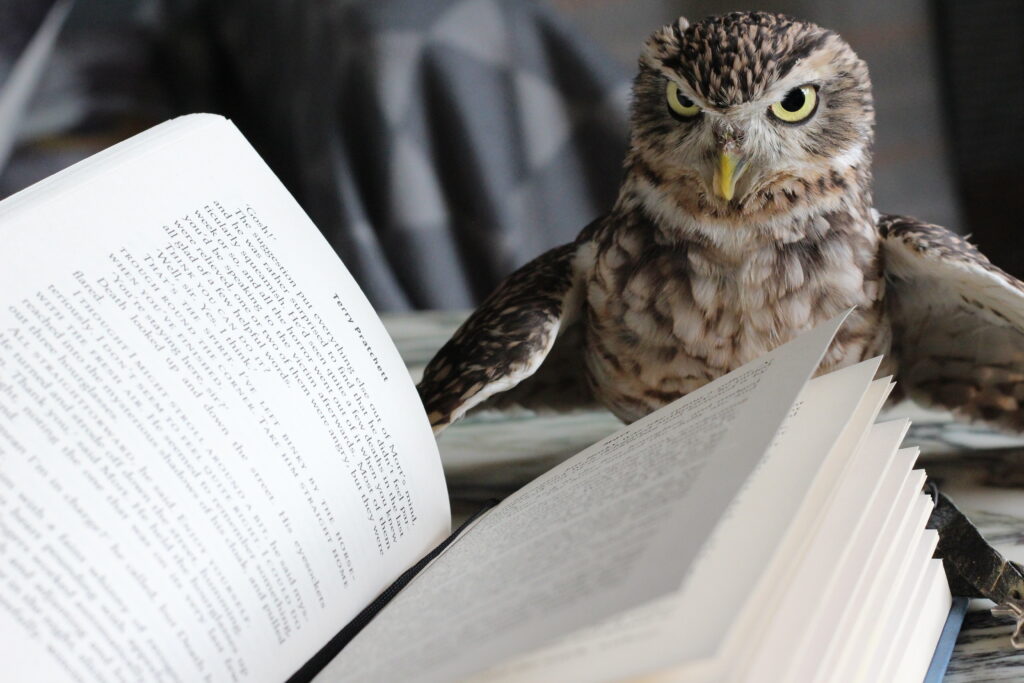