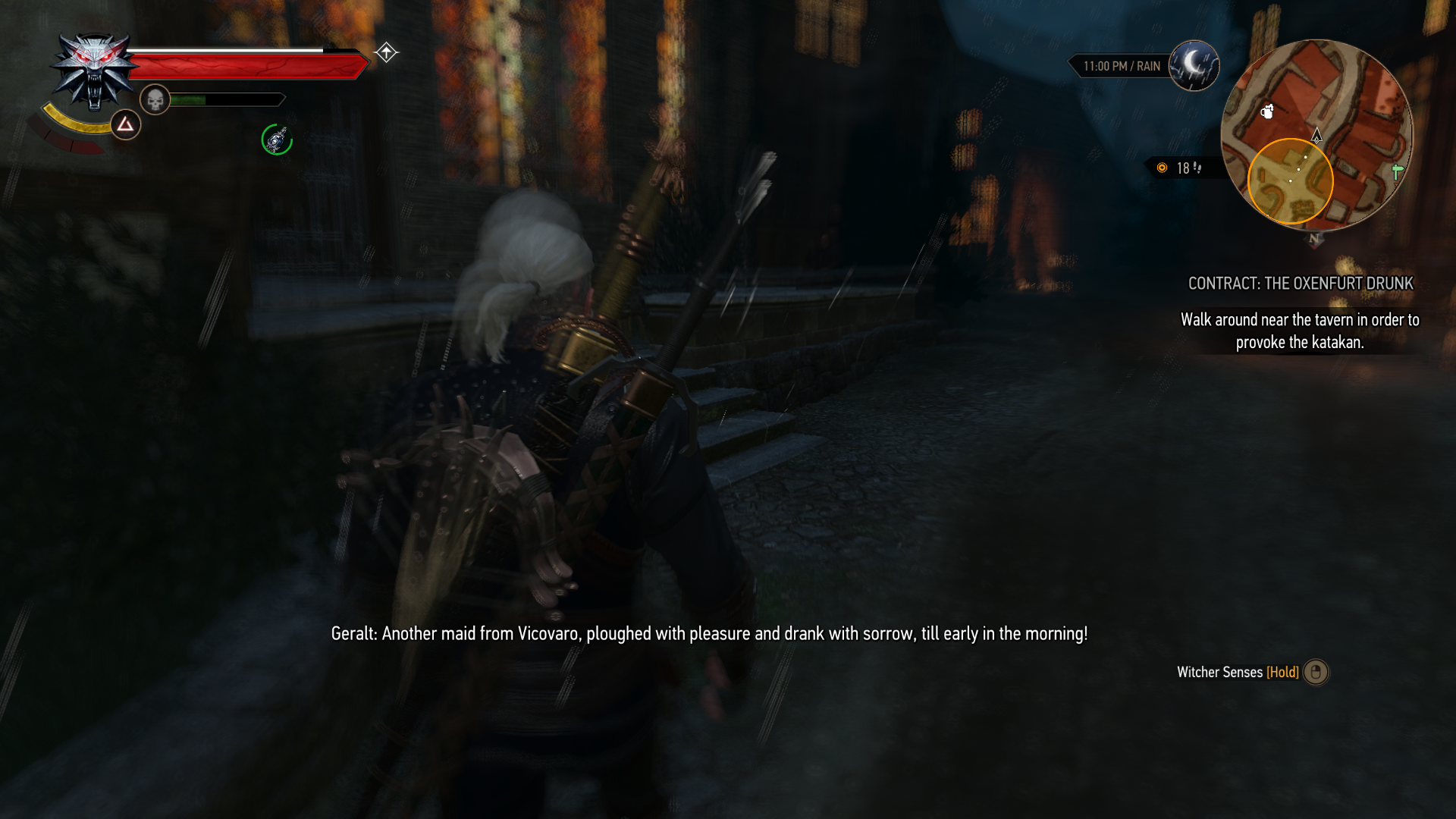 I’m replaying The Witcher 3 and I thought I would talk a bit about what makes this game so very special.

I could choose to talk about the great storyline, the amazing characters or even some of the big decisions you have to make throughout the game. But plenty of games have good overall storylines and characters. What makes Witcher 3 stand out from most other games I have played is how even many of its side quests manage to be memorable. I have picked out a few of my favorites while I played.

Mostly, I have chosen quests that are either hilarious or downright horrifying. Somehow, The Witcher 3 manages to stuff both extremes into one game and make it all work.

There’s some really messed-up shit in the Witcher games…

I’m sorry, what did you say? There’s a haunted island where everyone died mysteriously?
What are we waiting for? Let’s go!

In “A Towerful of Mice”, the sorceress Keira Metz gives Geralt a magic lamp and sends him to a haunted island. When he gets there, he uses the lamp to reveal ghosts relieving memories of the island’s terrifying history. You get to the tower at the center of the island where you find a lot of rats, as well as clues to how a mage who lived there experimented with disease on both rats and humans. You also discovers how the starving peasants attacked and killed the highborn family living there.

At the top Geralt encounters the spirit of the daughter who tells him how she wasn’t killed by the peasants, because she took a sleeping potion given to her by the mage. However, after the peasants murdered everybody, they left her there among the bodies, and then she woke up she was paralyzed and could do nothing as the rats ate her alive.

And that wasn’t even the end of it. Geralt still had to lift the curse and it all ends horribly. And I looked it up, and turns out I got the “good” ending… 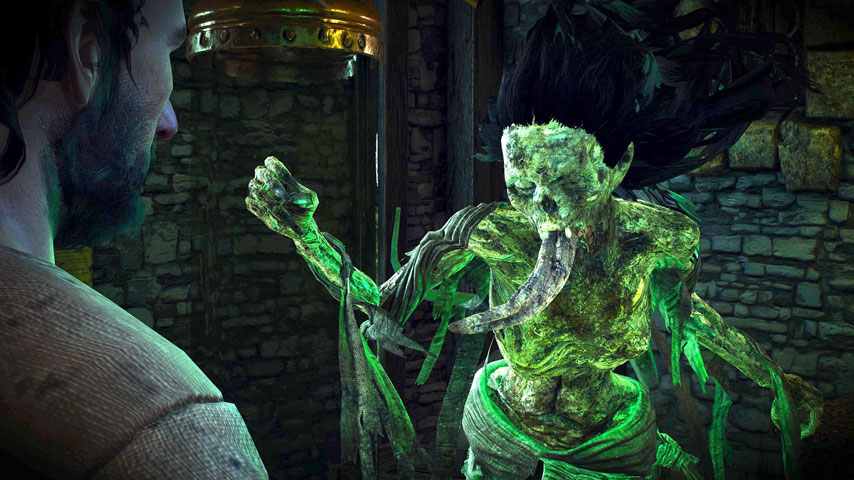 In this one you’re chasing a serial killer who murders his victims in the finest Jack the Ripper-style.

It starts when one of the characters Geralt has befriended, Priscilla, is attacked and nearly killed. It turns out that it’s far from the first attack of its kind, and Geralt has to break into the morgue (through the sewers, of course…) to examine the body of the last victim. After that, you start hunting for the murderer who gouges out the eyes of his victims and replaces them with burning coals, and forces them to drink formaldehyde.

While searching the sites of the attacks, Geralt finds religious propaganda promoting the Eternal Fire, signed by “A Concerned Citizen”. Geralt also discovers that the killer leaves behind notes with the next victim’s name in the mouth of those he kills, causing him to race to save the next on the list.

I’m quite sure I ended up killing the wrong man, but that’s the great thing about this game. You might make a rash decision, but it will stick. In this case it meant Geralt assumed he had gotten the right guy and didn’t pursue the matter further. You only find out you got the wrong guy far later, when you stumble upon the corpse of another victim by chance. 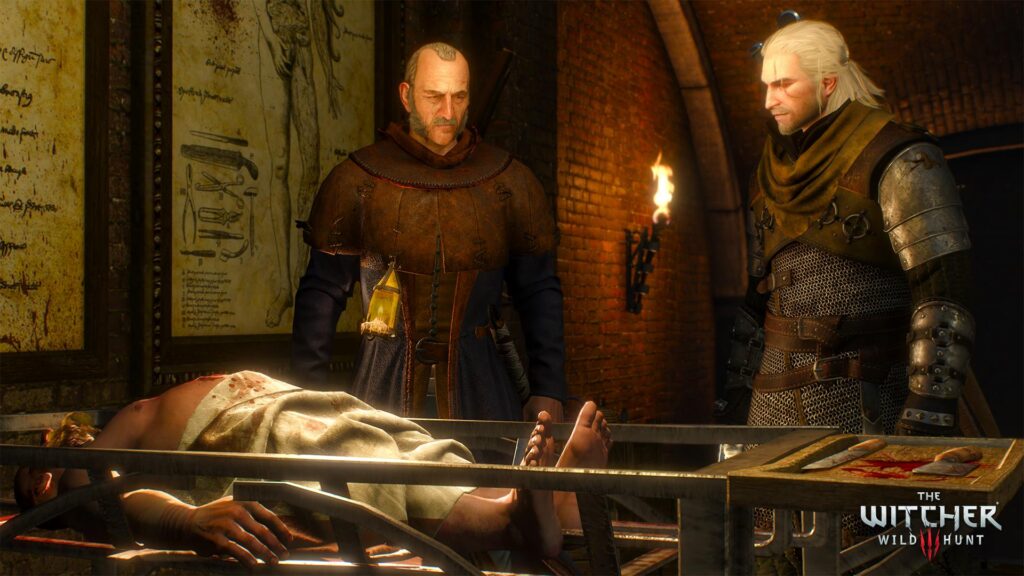 Scenes From a Marriage

This is part of the main questline for the DLC Hearts of Stone, but it got everything a horror story could wish for: A haunted mansion, a mystery, a weird Frankenstein-like caretaker and talking animals.

Olgierd von Everec sends Geralt to his old, abandoned estate to find the violet rose he gave his wife the last time he saw her. When Geralt gets there, he finds the whole place shrouded in an unnatural fog, and while it’s clearly been abandoned for a long time, the flower beds are strangely well-maintained.

In the back garden, you find this strange patchwork man digging a grave for a thief who broke in and got killed by this ‘Caretaker’. Best of all, when you kill the Caretaker, you can loot his spade… which is, for some reason, one of the best weapons you come across in this game. I’ll never get tired of whacking bad guys in the head with a spade. Never.

Anyway, you have a chat with this weird cat and dog who refuse to give clear answers (what is up with talking animals always being annoyingly vague?) and then you enter the house to try and find Lady Iris, Olgierd’s wife. You immediately catch a glimpse of her creepy ghost crawling out from an old painting before she disappears off to god-knows-where and leaves you to explore the obviously-very-haunted house. While you do so, chairs will randomly fall over, ceiling beams will fall down, and Lady Iris will whisper encouraging things like “You will die here” from somewhere close-by.

Eventually, you find Iris’ body, lying on the bed in her bedroom.

To appease her wraith, Geralt holds a burial for her and her wraith arrives, creating a world of memories from a painting that she makes Geralt enter.

It’s all rather trippy from here on out… 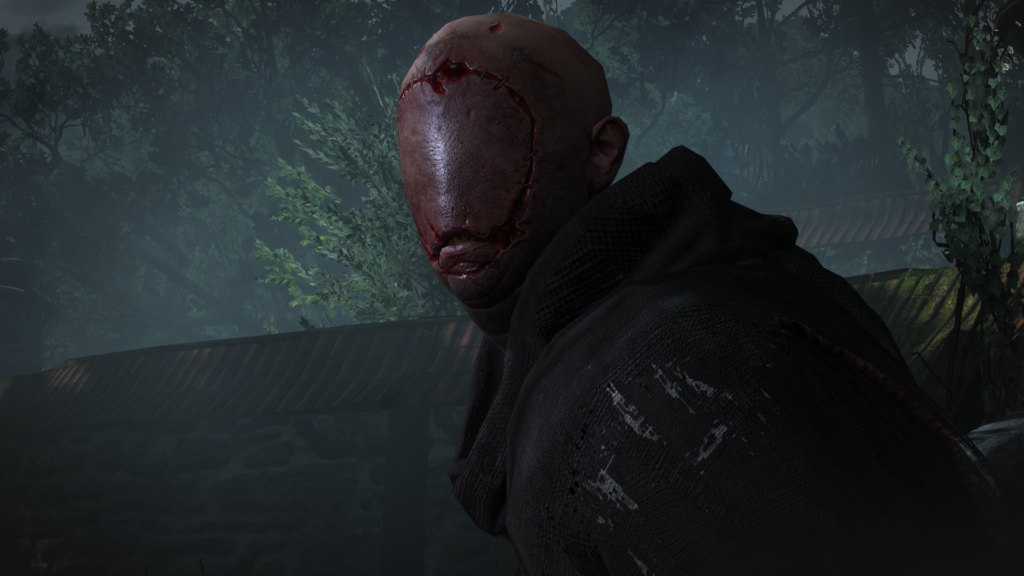 Luckily, it’s not all horror and tragedy!
(Except possibly for the poor fellow who got hit in the head by the flying cow…)

Another quest with an investigation that starts in a morgue, yet this one gets to go under the funny ones!

Oh sure, it’s about a vampire on a killing spree in the city of Oxenfurt, but it’s about an alcoholic vampire on a killing spree in Oxenfurt, meaning Geralt has to get drunk off his ass to lure it out. This katakan only attacks and drinks the blood of drunkards, so after Geralt empties the nearest inn for cheap wine, he staggers around in the street, singing rowdy ballads.

One of the best parts is the grumpy man yelling out his window, complaining about the noise and vulgarity. At one point you can hear him go, “Young people, these days!”

Geralt’s probably close to being 100 years old, yet he still goes, “Alright, alright, sheesh” and stumbles on into another street.

Eventually the katakan attacks and you have to do half the fight while completely pissed… but of course you eventually chase it down and cut its head off. 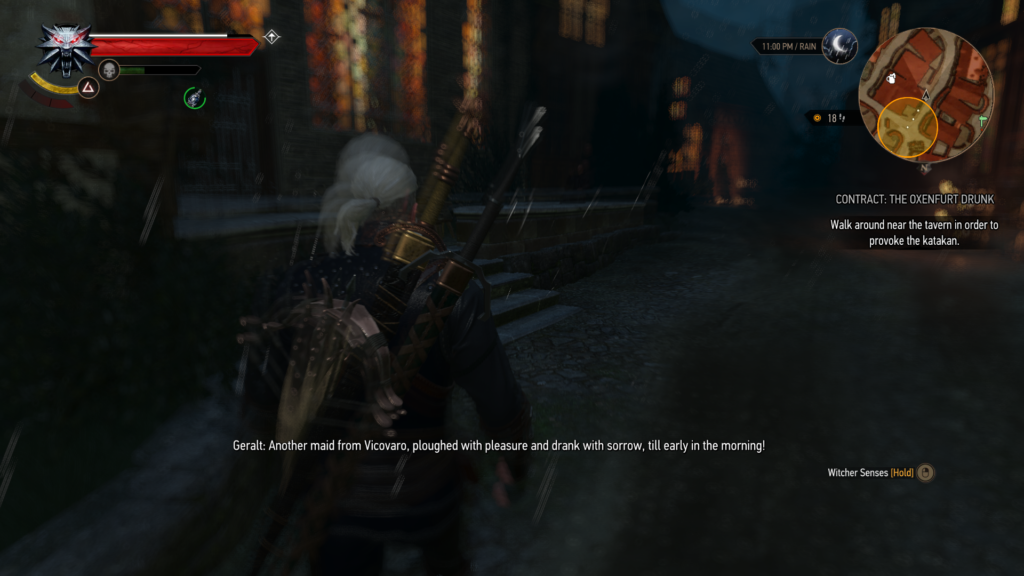 Of Dairy and Darkness

Before I played Witcher, I didn’t know what a Tyromancer was.

A Tyromancer tells the future… from cheese. Tea leaves are for amateurs!

In this quest, Geralt goes to investigate the abandoned tower, formerly owned by the mage Aeramas, and finds a labyrinth of stinking, poisonous cheese in the basement. The quest log describes it as “fouler smelling than a drowner’s scrotum”. For any normal person, that would be the cue to leave, right? Not for Geralt. Geralt decides to pass the Trial of the Cheeses.

In the end, Geralt finds a valuable sword and names it “The Emmentaler”, and I considered whether or not it’s possible to smack the player-controlled character… 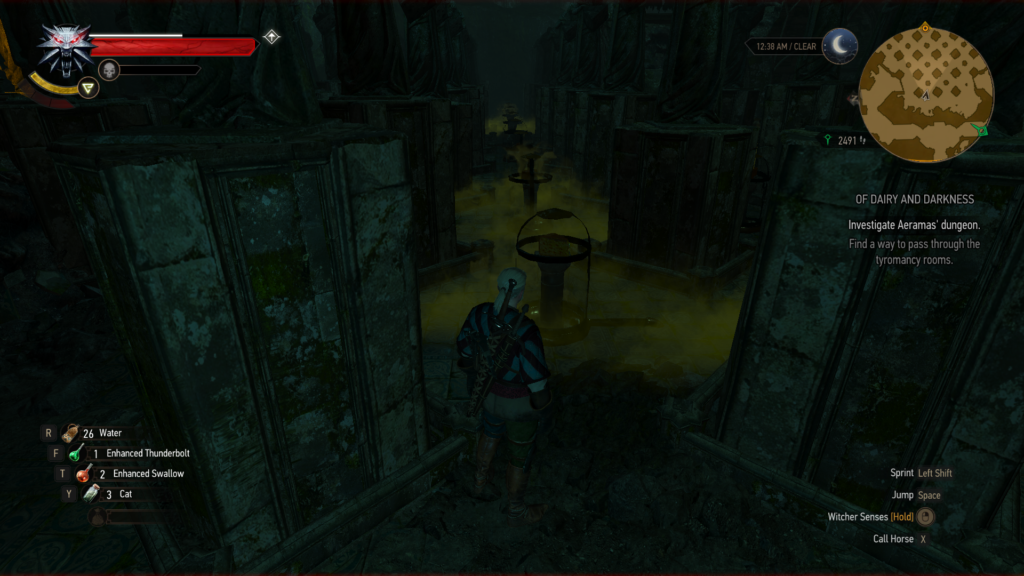 Okay, so how do I describe this quest to do it justice…?

Geralt is hired by a very distraught art curator because the statue of Reginald d’Aubry has had its testicles stolen. Apparently, these stone balls are rumored to give all who strokes them unparalled virility.

I’m not making this up.

Since Geralt will do a lot for money, he sets out to locate the thief who took off with poor Reginald’s crown jewels. He tracks the thief to a house and finds him… busy. With someone else’s wife.

In the end, if all goes well, Geralt might end up running around with “Reginald Statue’s Genitals” in his inventory until you finish the quest. As part of his reward, the art curator invites Geralt to the opening and promises that he can stroke Reginald at no charge.

…Someone at CD Project Red actually had to sit down and write this. 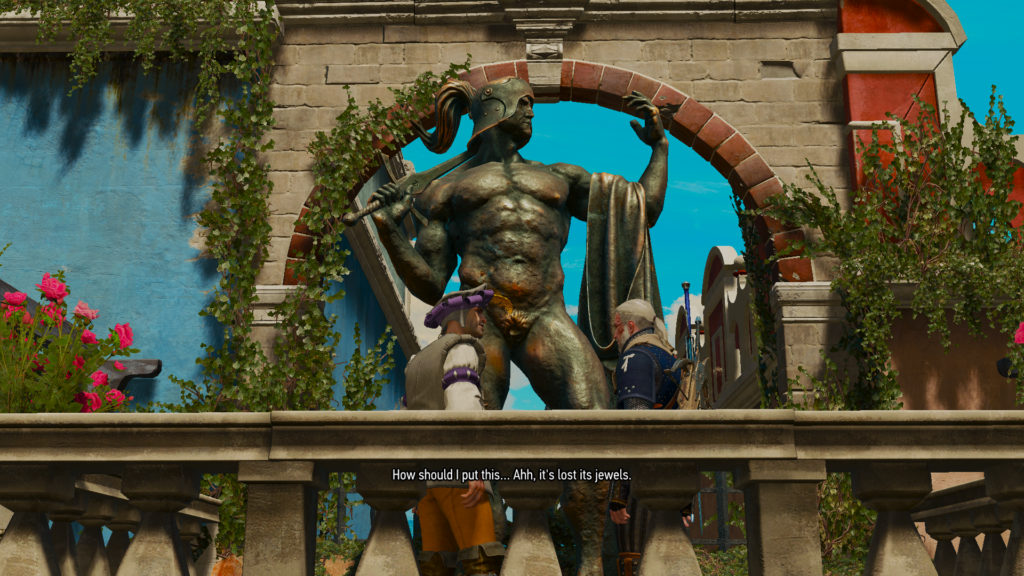 When Geralt returns to Touissant in the Blood and Wine DLC after many years away, he meets an old acquaintance who wants to pay him for an old contract he fulfilled. All Geralt needs to do to get his reward, and all the interest that has piled up over the years, is to go to the bank and get it…

So Geralt goes to Cianfanelli Bank and asks the clerk to withdraw his money. However, the clerk finds that the account holder, meaning Geralt, is noted as deceased. Her information is clearly inaccurate, but she still requires a Permit A38 from Geralt. She directs him to window number one.

At window number one, Geralt is told he’s got the wrong window.

The unhelpful clerk at this window leaves him no other choice than to ask around for Permit A38.

When he finally finds the clerk who issues Permit A38s, he’s asked for his Form 202. Geralt does not have a Form 202.

He’s told to get a Form 202 from window number one.

The clerk at window number one is now on her break.

When the clerk finally gets back, she very reasonably explains to Geralt that she can’t issue a Form 202 to someone who’s been declared dead.

To Geralt’s credit, he lasts a long time before he starts threatening people enough to have the guards called on him. 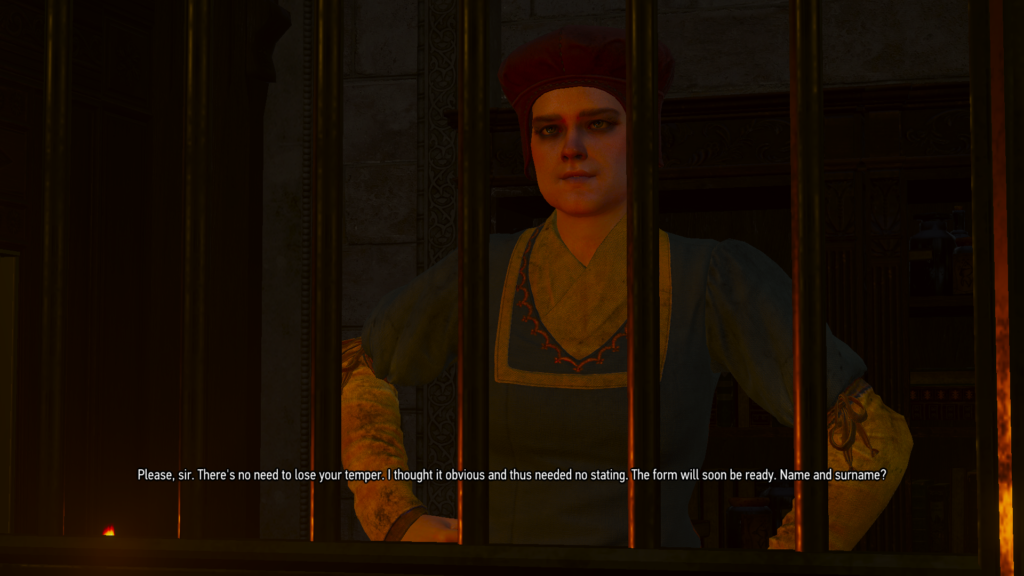 This one makes the list simply because all you’re told when hired by the quarry foreman is that a cow fell out of the sky and landed on one of his workers.

Understandably, this is considered to be a bit of a problem. 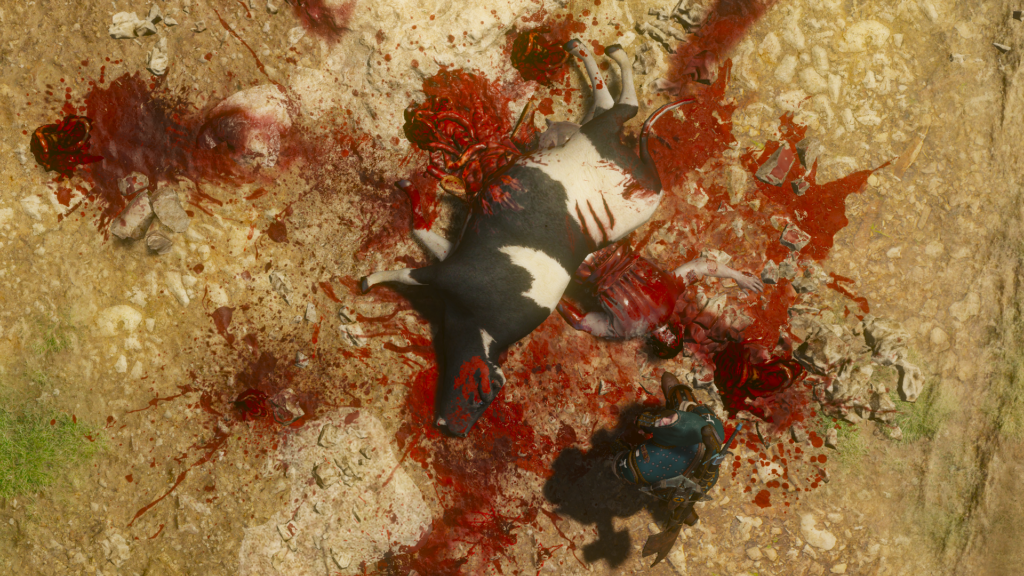 Not quite a quest, considering the objective is to get drunk with fellow witchers Eskel and Lambert, but seeing the three usually serious witchers drunk off their asses and reminiscing about old times on the job is amazing. And Geralt and Lambert drunk-bonding is adorable! Throw in Lambert stealing Vesemir’s hat and doing impressions, a game of witcher “I have never” and then breaking into the sorceress Yennefer’s room and dressing up in her clothes to drunk-dial her friends with a megascope, and you have a party! 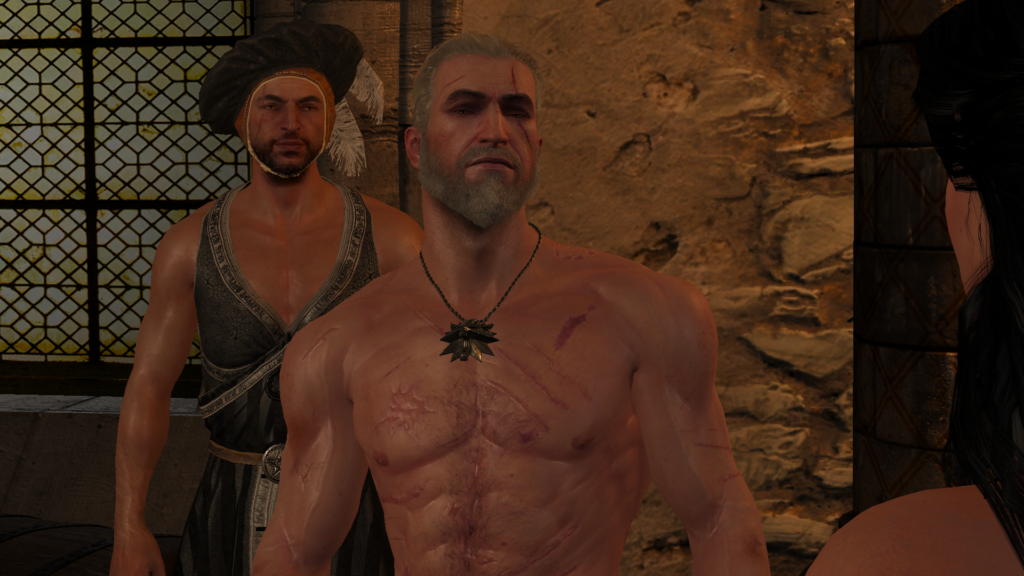 So these are my personal favorites. Or, at least, a small selection of them. It’s hard to choose with this game!

What is your favorite quest in The Witcher 3? Or any of the other games, for that matter?