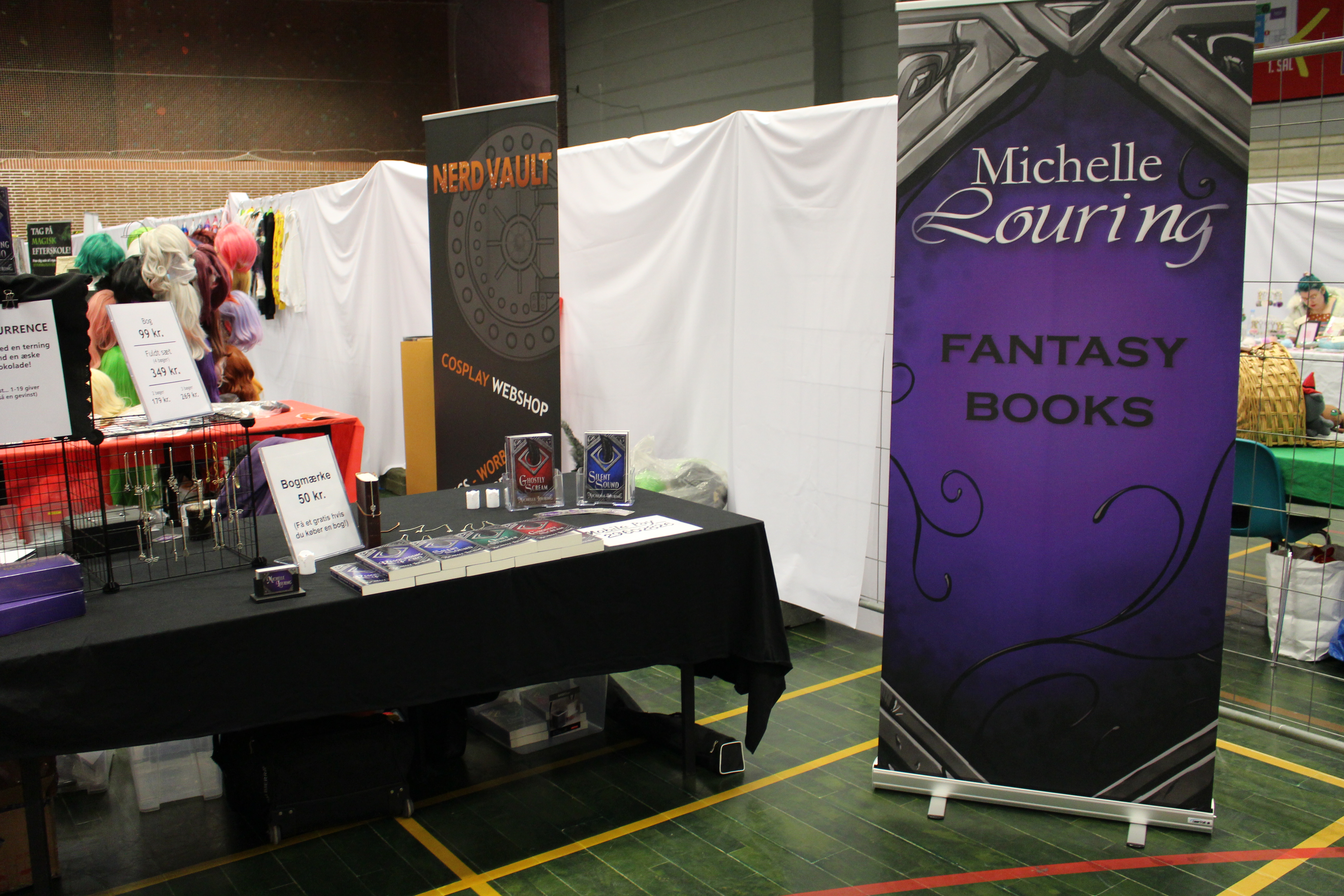 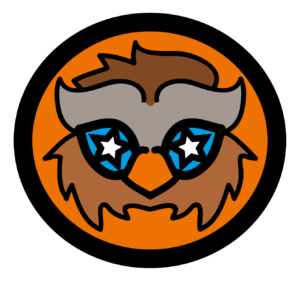 Since I’m finally semi-recovered after getting home from KoyoCon yesterday, I suppose it’s time for a Post-Convention Post!

Honestly, this one will not be as interesting as many of  my other con tales. No one tackled me, no one made me pose on top of a booth table, no one licked me (yes, that actually did happen once), no one tried to throw me in a trash can, and for once I didn’t end up on the news. I had a great time, and I sold a ton of books, but as someone who doesn’t drink or party that often I get all my crazy stories from these conventions. I’m kind of bummed that this weekend I had a near flawless record of professionalism and dignity.

I mean, I was dressed like a sassy demon and carrying around a goofy-looking stuffed Magikarp, but that’s no less than what you guys expect from me by now.

About KoyoCon: KoyoCon is a small pop-culture convention in Denmark that is held every year in November. Every year you can find me there selling books in the Artist Alley, running around in weird cosplays, working as part of the event team, or assisting one of the vendors in the dealer hall. A couple years I have done three of the aforementioned all at once, and the amount of caffeine that takes to pull off is not healthy.

This year my author table was moved up next to the cosplay supply shop NerdVault’s booth in the dealer hall (which is owned by friends of mine), so I could sell both books and wigs without having to be in two places at once. And the garish, impractical WoW armors had been put aside in favor of cosplaying Crowley from Good Omens, because he dresses nearly exactly like I would have either way and I got the added benefit of hiding my tired eyes behind sunglasses. 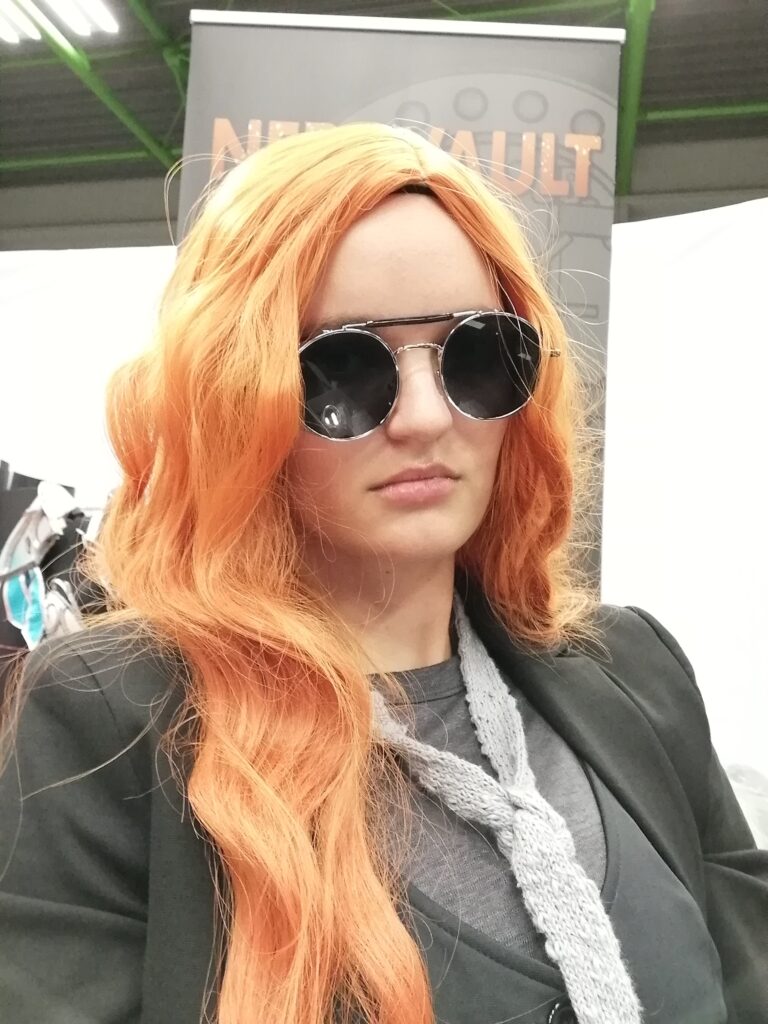 Really, this might have been the laziest cosplay I have ever done. I had all the clothes already in my closet, except for the shirt which I bought from the nearest H&M store. My mom loves knitting, so she made me the weird necktie thingy, the sunglasses was bought from Wish, and the wig was brought to me at the convention because I was helping out at a booth that sells wigs. I didn’t even cut and style said wig as I had planned, because I looked damn good in it and I didn’t have the heart to mangle it.

I literally didn’t make a single thing for this costume, but it was the most comfortable cosplay I have ever worn, and I have come to the conclusion that creativity and hard work is overrated.

(That’s the right attitude for a writer to have, right?)

I did initially despair at the lack of Good Omens cosplayers. I had thought the place would be crawling with Crowleys (see what I did there?), considering it’s such an easy costume to do, and both the show and the character are absolutely amazing. When I finally found an Aziraphale cosplayer I was so thrilled that I immediately abducted this stranger from her friends to go have pictures taken at the convention’s photobooth.

The next day I ran into one of my good cosplayer friends whom I had been looking for ever since the convention started and found her in the company of another Crowley cosplayer. I was so distracted by this that it took a moment before I took another look at my friend and realized that she was cosplaying Aziraphale.

Cue me dragging more people off to have pictures taken.1

Despite me getting distracted by every blonde angel or red-haired demon passing by, I did actually spend most of my time working. After all, this was my first convention selling my newest book Ghostly Scream, not to mention the beautiful new editions of my three previous books, so I was determined to be a good salesperson.

(Also, paperbacks are heavy as hell, and I didn’t want to drag all of them home again.) 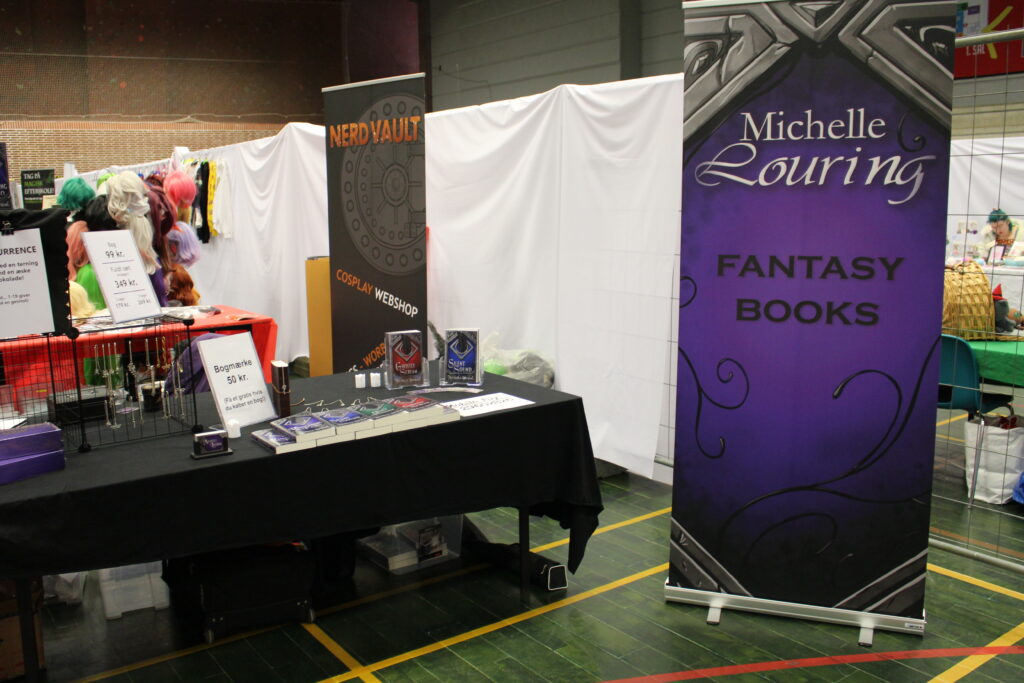 I’m not sure if it was the new editions or that I’m surprisingly sexy as ginger, but I ended up selling about 3 times as many books as I usually do at a highly successful convention.

It certainly wasn’t my marketing efforts. I was offering mobile payment as an option, and everyone showed me their phone screens for me to confirm that the name that came up when they typed the number on the sign was mine. This would have been completely reasonable… if it hadn’t been because my name was printed in large letters on literally 90% of everything at the table.

But I really don’t have a leg to stand on when it comes to paying attention. I spent the first two days of the convention telling everyone who asked that my books were unfortunately only available from international stores like Amazon unless they bought them from me or asked a bookstore to order them specifically. Then late Saturday afternoon a guy mentioned that he might order them from Saxo…

Saxo is the largest online book retailer in Denmark. I have bought between 70 and 100 books from them – and that’s just in the last year.

I did not know they carried my books.

(I checked, and it’s literally the first result that comes up if you google my name in Denmark…)

It’s not quite as great as seeing your books in a local brick-and-mortar bookstore, but considering that Saxo is my all-time favorite bookstore and that this guy had actually gone looking for my books there specificially, I’m still pretty excited about it.

It’s nice to be acknowledged by the place that has leeched all my money for years.

Others of my customers had other concerns than the availability of my books. I hadn’t thought of this myself but on no less than three different occasions over the weekend it was pointed out to me that the new covers for my books contain the colors for each of the Hogwarts houses except for Hufflepuff, and that I needed to rectify that as soon as possible. They were feeling very strongly about this. Not even me explaining that I had already had artwork made for the next 3 book covers for the series, and that none of those were yellow, was accepted as an excuse… so now I suppose I will have to contact my cover artist again.

Don’t mess with the Hufflepuffs, guys.

I also promised a guy that my next book would involve geese. No specifics. He just wanted geese.

Except from that the convention was rather uneventful. Sure, I lived in constant paranoia and scanned my surroundings for an ambush whenever my friend Steffan came by and wanted to give me a hug, because of last year’s Cat Ear Incident, but it turns out the usual mastermind behind my suffering, my other friend Maria, had been caught up at work and couldn’t make it to the convention.

(She intentionally neglected to tell me this until after the convention, because she knew it would mess with my head.)

Sunday was the day of the Cosplay Craftmanship competition, in which several of my friends were competing. I didn’t have time to go see it, but I was there when they returned to the dealer hall to collapse from exhaustion into the nearest chair.

My friend Mette (going under the name Zilaji Cosplay, and also the owner of NerdVault) was cosplaying as Ciri from The Witcher 3, so obviously I was pretty excited about this.

But not so excited that I will use one of the good photos I took of her cosplay instead of this: 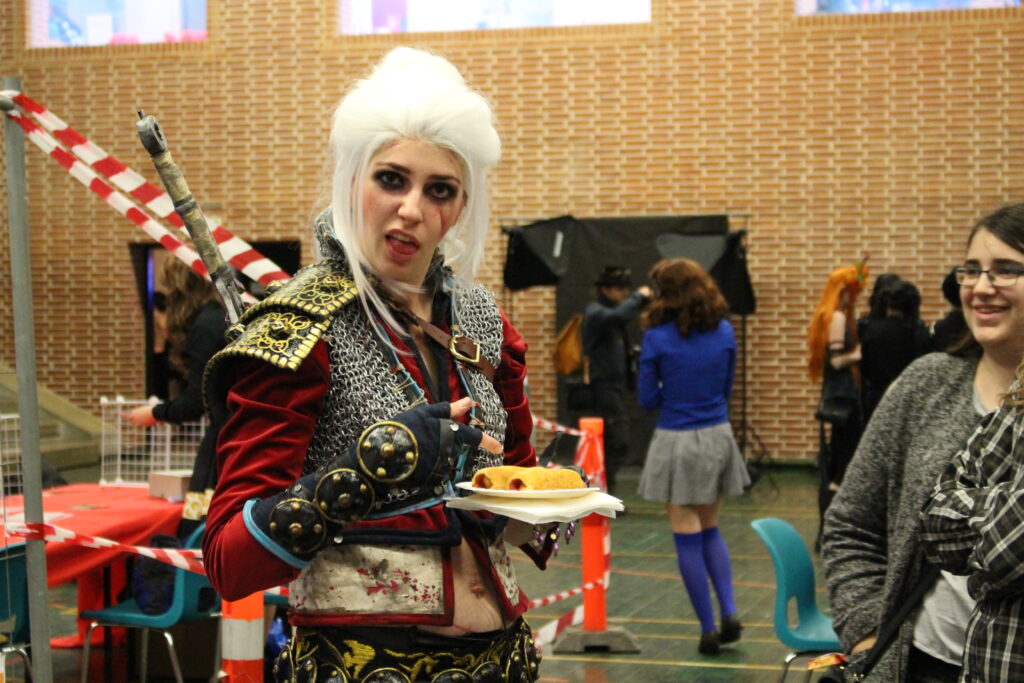 (She’s going to kill me if she sees this post. But considering I have admin access to her webshop and my first thought was to put it on the slider on the front page, I think she should consider herself lucky…)

Another friend of mine, Sarah (better known as Caiva Cosplay), cosplayed as Lich Jaina from Hearthstone, and considering she’s one of the most skilled people I know (and I’m not just saying that to justify losing to her years ago at the very first cosplay competition I attended), it’s no surprise that she won the qualification to ECC (European Cosplay Championship). But that’s not why she gets to be in this post.

She gets to be in this post because when I saw her after the competition I called out to her and asked to get a picture, and she swirled around and proudly revealed her footwear: 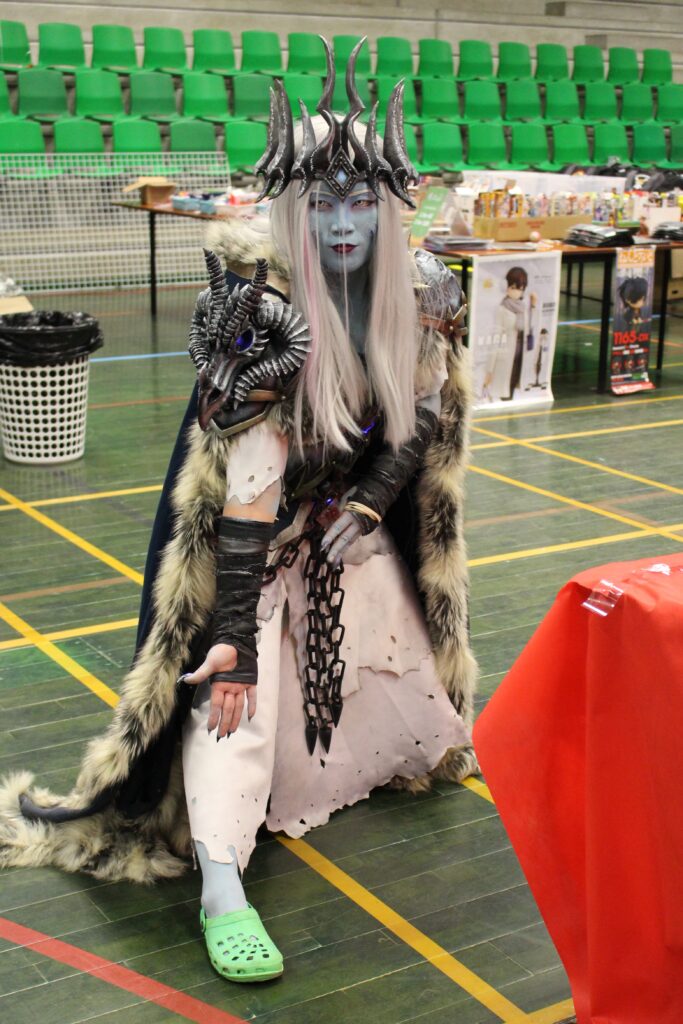 Since I didn’t take that many pictures this time around – and since I hadn’t gotten my hands on some rats yet – I’ll leave you with one of my new mascot.

I only got him because I accidentally accepted a giftcard for another booth, thinking it was a general dealer hall voucher, and I had to use it for something to pretend I hadn’t messed up. But it turns out he looks great in my Crowley sunglasses.

I’m open for ideas for a name for him. 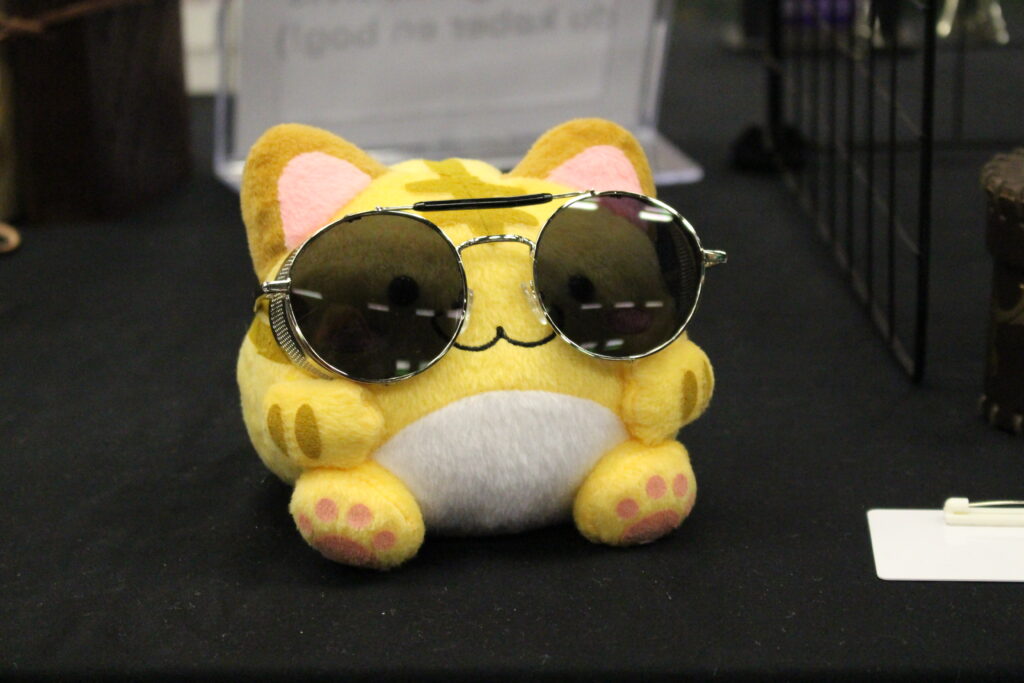 1 I’m hoping to add the photobooth pictures soon, but the photographer (another cosplayer acquaintance of mine) said it might take some time unless I agreed to burn down the supermarket where he works during the week.2

2 I told him I could release some rats and simply have the place shut down for a while.