Selissa took a shaky breath to steady herself. “If you’re not here for me,” she said slowly. She knew that if he really wasn’t going to hurt her, she should just get the hell out of there and put as much distance between herself and him as humanly possible. But no matter how frightening she found him, there was also something about him that made her pause. “Then why are you here?”

His grin widened and Selissa felt the blood freeze in her veins. She had never met anyone who made a smile look so unnerving.

“I had some…” Ardeth paused for a moment. “Business to take care of in the area. And I decided to pay this place a visit while I was here.”

Selissa shuddered at the way he said the word ‘business’. She wondered how many innocent lives were lost every time he had business to take care of. 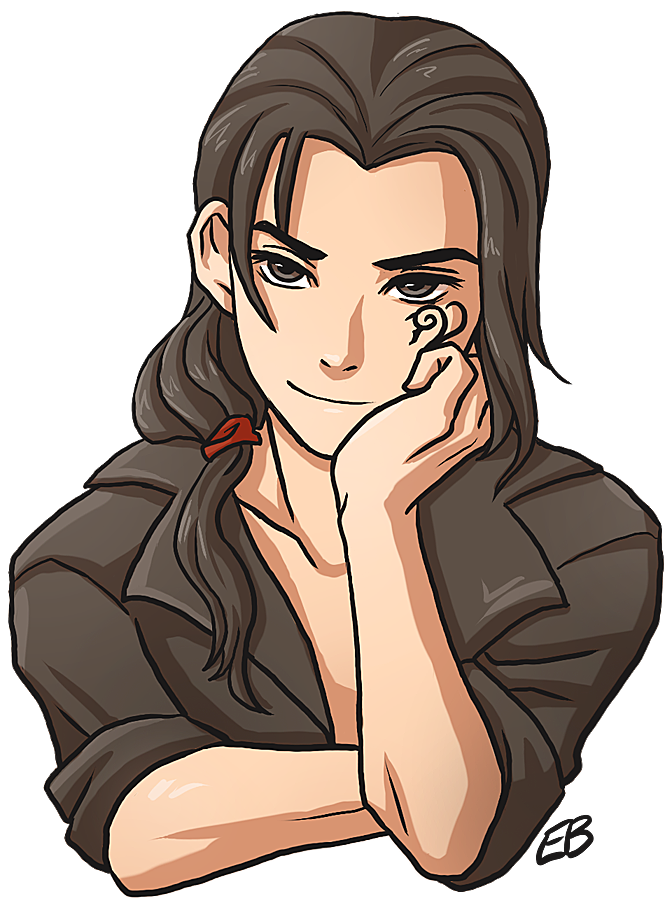 Backstory
As a child he lived in a small village with his mother. One day when he was playing at a lake, a villager saw him pull a bone from his wrist and immediately ran to tell the rest of the village.
When he got home, an angry crowd was waiting at his house, while his mother was crying and trying to calm them down.
When they saw him, his mother tried to prevent them from getting to him and ended up getting beaten to death.
The villagers dragged Ardeth through the town, intent on tattooing the Mark of the Cursed on him, marking him as someone who had been influenced by demon magic.
To prevent them from hitting him, he let his bones grow out over his skin so they couldn’t touch him.
It took four full-grown men to restrain him as they tattooed the mark on his cheek, but in the end it wasn’t enough and he ended up killing every single one of them.
Later in life he ended up joining the Demios Clan, led by the fanatic necromancer Ilyan, whose goal was to revive the demon lord Azarial.
Ardeth didn’t share Ilyan’s ambitions, but joined simply for the sake of having a place to belong.
As he didn’t hold any loyalty towards the Demios, it didn’t take much for him to abandon them after meeting Selissa, who the clan wished to capture.

Personality
He acts charming and playful most of the time, but he has no qualms about taking a person’s life, no matter the reason. To him, a human life is worth nothing more than a rat’s.
He almost never gets angry, handling anything with absolute calm.
He’s loyal only to himself and only works for others to relieve his boredom.

Abilities
He was born with the ability to freely manipulate his bone structure, enabling him to regrow his own bones or pull them from his body.
He is extremely talented at combat and can easily take down 10 armed men. He often uses his bones as weapons, growing them into swords or claws. He can also use them to shield his body.

Selissa
Ardeth started helping Selissa on a whim as he had grown bored with the Demios Clan and didn’t feel any real loyalty towards them. At first he merely found her fascinating, but it soon grew into a deep attraction.
Selissa is the only person who can make Ardeth unsure of himself, as he has never felt anything towards another human being. He values her deeply, but has a hard time understanding her compassion for humans.

Cold, dark eyes were watching her intently. The man watching her was crouching on the roof of one of the buildings and was dressed from head to toe in black clothes. Black clothes covered in blood.
Long, black hair was tied in a low ponytail and falling down his chest. And a black tattoo snaked its way across his face…
Demios. A feeling of dread spread through her body. The man was watching her calmly, appearing completely relaxed, but still he appeared to emit a feeling of danger. Of death. She felt it surround her and made her feel like she was choking.
She swallowed hard, her eyes never leaving the Demios. The man cocked his head, strands of dark hair falling into his eyes. A smile graced his lips, standing in sharp contrast to his blood-covered appearance.
“Something wrong, sweetheart?” He asked, smiling at her gently.
Selissa took a cautious step back, all the while trying to swallow her panic. He was smiling. He was covered in the blood of a man he had practically slaughtered, and he was smiling.
“Their insanity is clear for everyone to see”. Alassane’s words echoed in her mind.
The man didn’t move, but his eyes continued to bore into her.
A million things ran through her head. Could she run? Would he go after her if she did?
It wouldn’t help. He had attacked that man and had been gone before no one even noticed something was wrong.

Once again, artwork made by ZKROX. This time it’s the characters Selissa and Ardeth.

Not a favorite of mine, as Ardeth’s expression doesn’t quite fit his character. He looks… kind *Shudders*

But still great work done from the artist!

Character artwork of Ardeth, made by my faithful illustration artist ZKROX.

This was actually meant to be the cover art for Quiet Whisper, the third book in the Angel’s Voice series, but for some reason I’m not so sure about it. I’m leaning towards the first artwork of this character instead, but I’m still torn.

Wonderful new piece of artwork, featuring Selissa and Ardeth from the Angel’s Voice series(For once not trying to kill each other…)

This piece was made by shutterbones, another fantastic artist from DeviantArt.

I absolutely adore Selissa’s expression in this picture. Especially the eyes and the distant look in them are perfect!