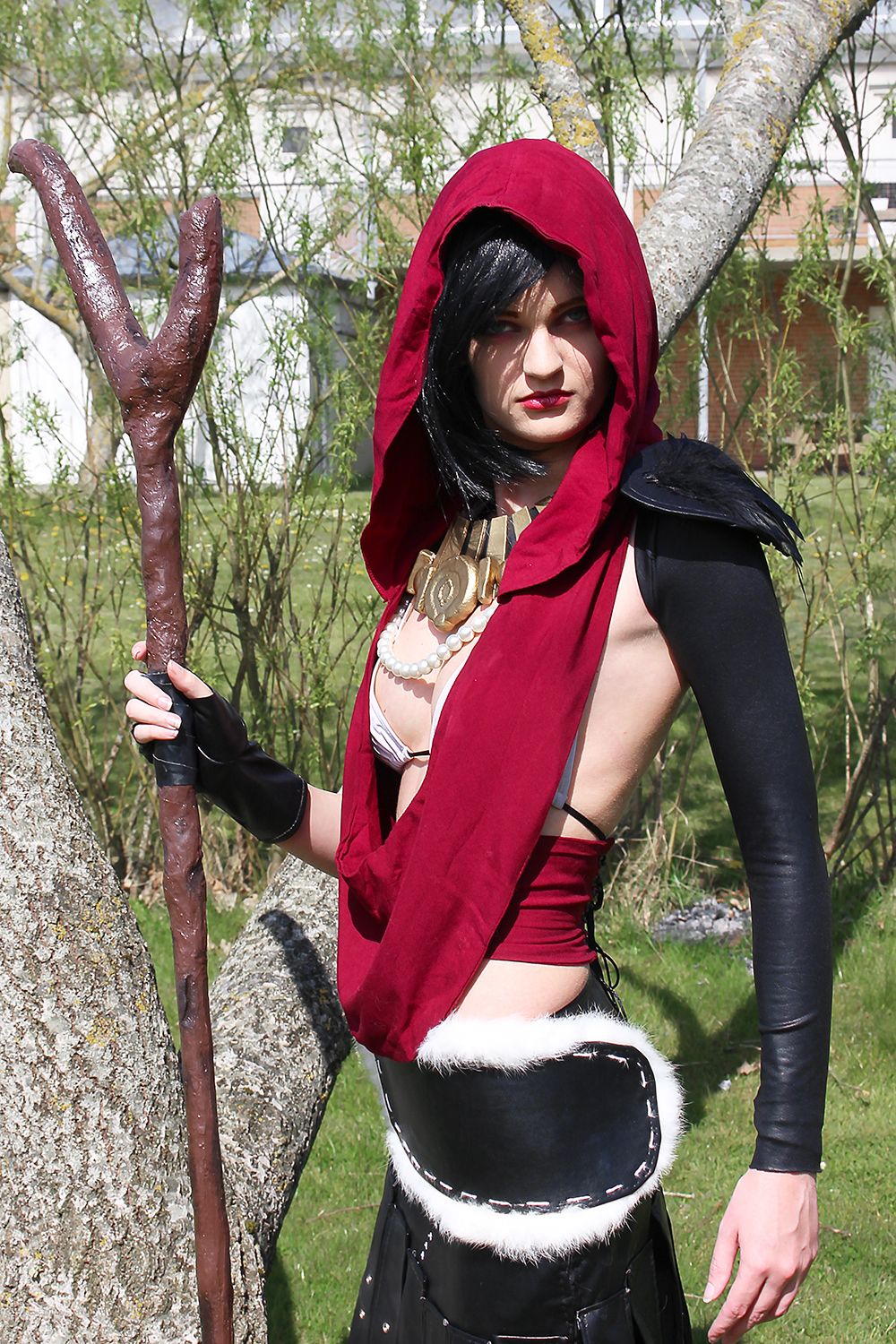 Finally finished writing another of these posts, this time for my Morrigan cosplay!

Looking forward to when I start doing this for NEW costumes, so I won’t have to spent hours searching forgotten folders on my backup hard drive to (hopefully) locate progress pictures… 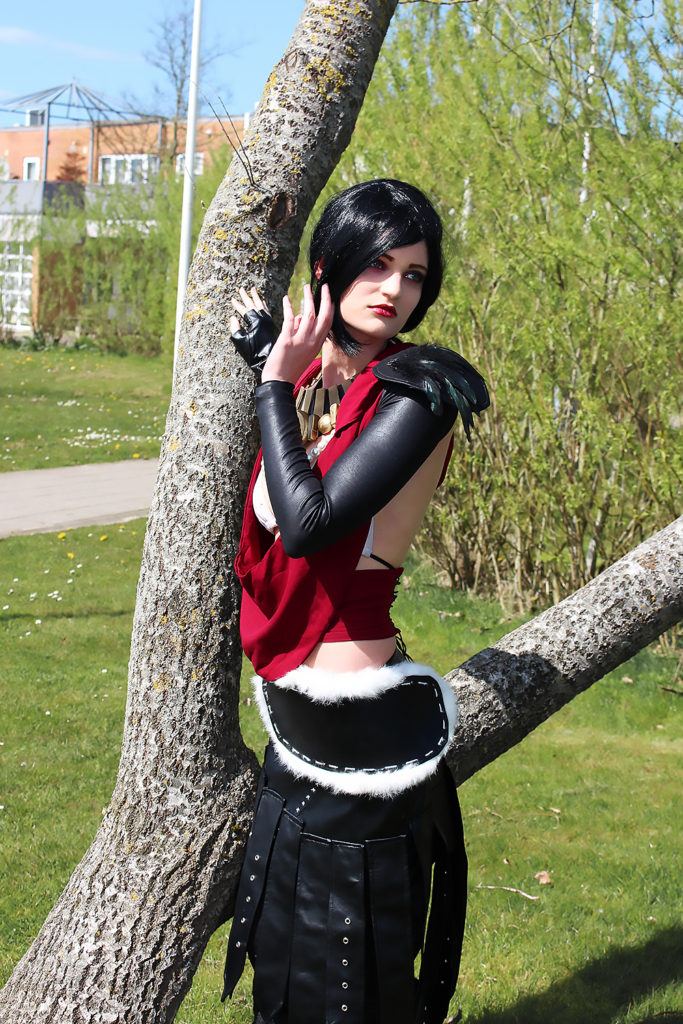 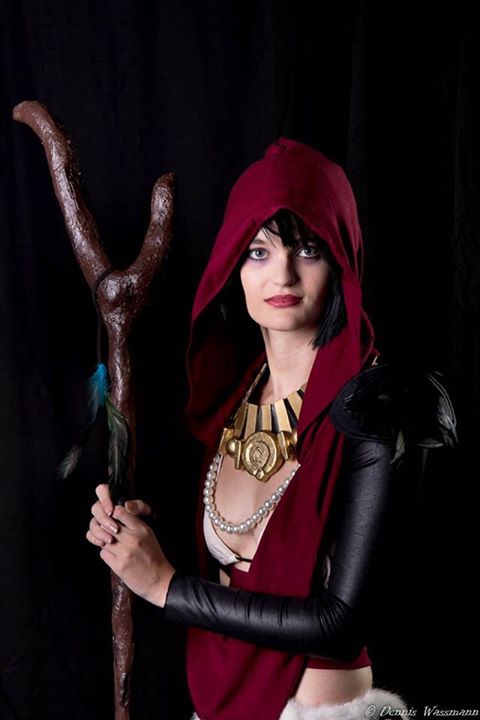 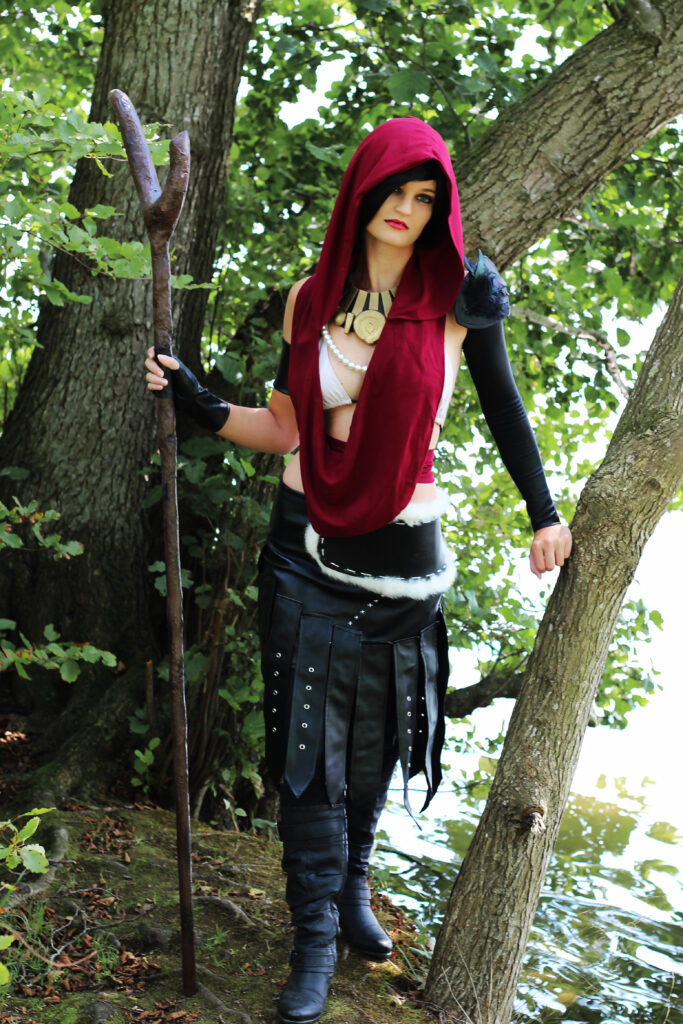 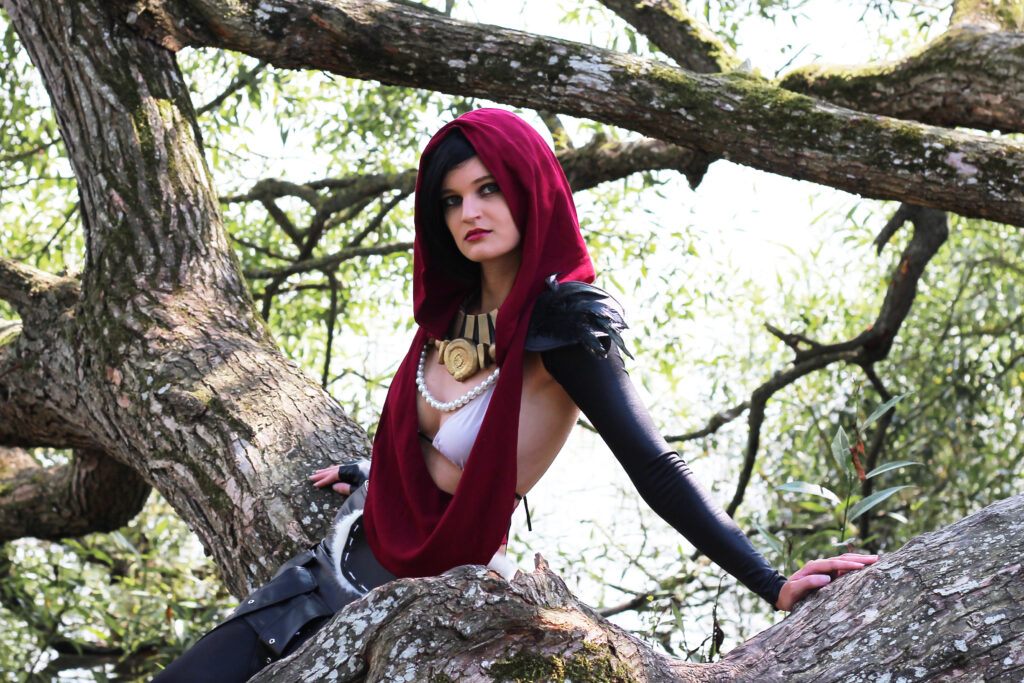 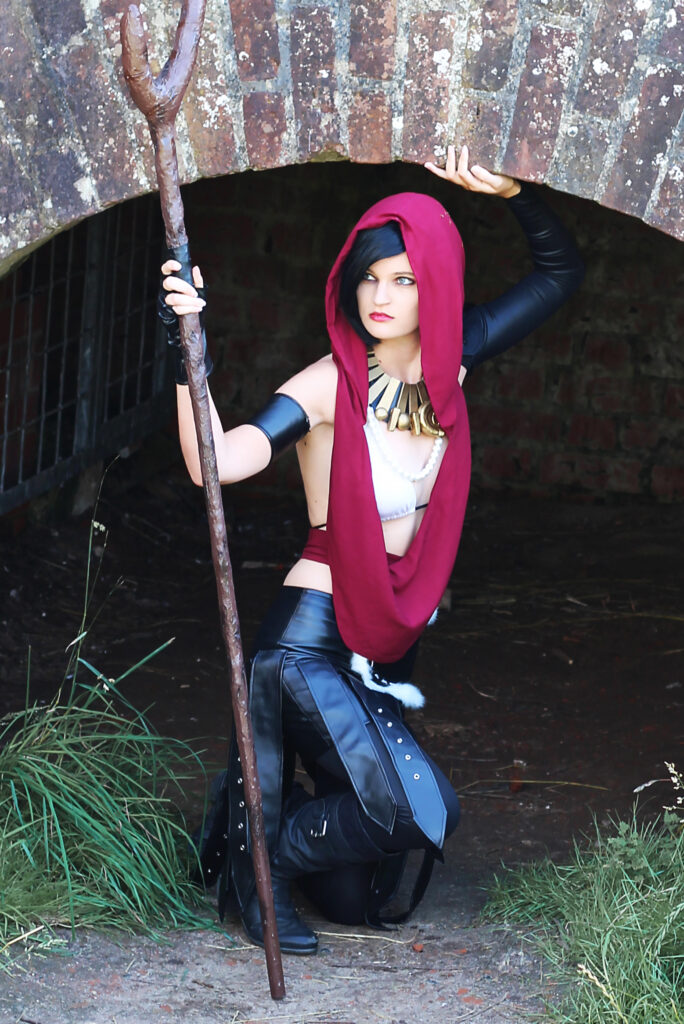 As is often the case with my cosplays, I used a couple different references and picked the parts I liked from each. With Morrigan, this was mostly because she wears NOTHING under her very, very open cowl in Dragon Age: Origins, but she was a bit more fortunate in her concept artwork.

I can deal with revealing costumes, but I draw the line at flashing an entire convention because fabric slips in reality, as opposed to video games 😂 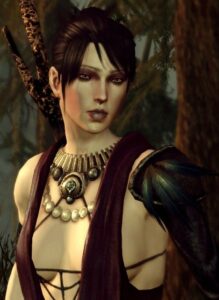 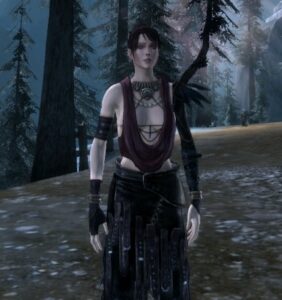 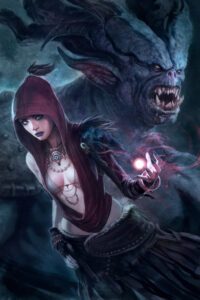 Story behind the costume

Not much to say here. I got Dragon Age: Origins for free one day, played it for about 15 minutes, got obsessed, met someone even more obsessed who was already making a Dragon Age cosplay, and suddenly I had decided to cosplay the bitchy witch wearing way too little clothing.

Morrigan is the mistress of Sass, and there was no way I could get away with NOT cosplaying her.

With Morrigan I didn’t experiment with as many different materials as my other costumes… which might also be why it’s one of the only cosplays I have that I can move almost freely in.

The cowl is made entirely from normal fabric. Nothing fancy going on there.

For the skirt, I used a plain pencil skirt as a base and sewed faux leather around it. The patch at the top is made from EVA foam, covered in the same pleather and with rabbit fur attached around the egde. It’s attached to the skirt with push buttons, meaning it’s detachable, because it covers the zipper for the skirt.

All the “belts” hanging from the skirt were made separately and from scratch, all in the same pleather as the skirt and with metal rings hammered in (I love getting to use a hammer when I sew stuff). 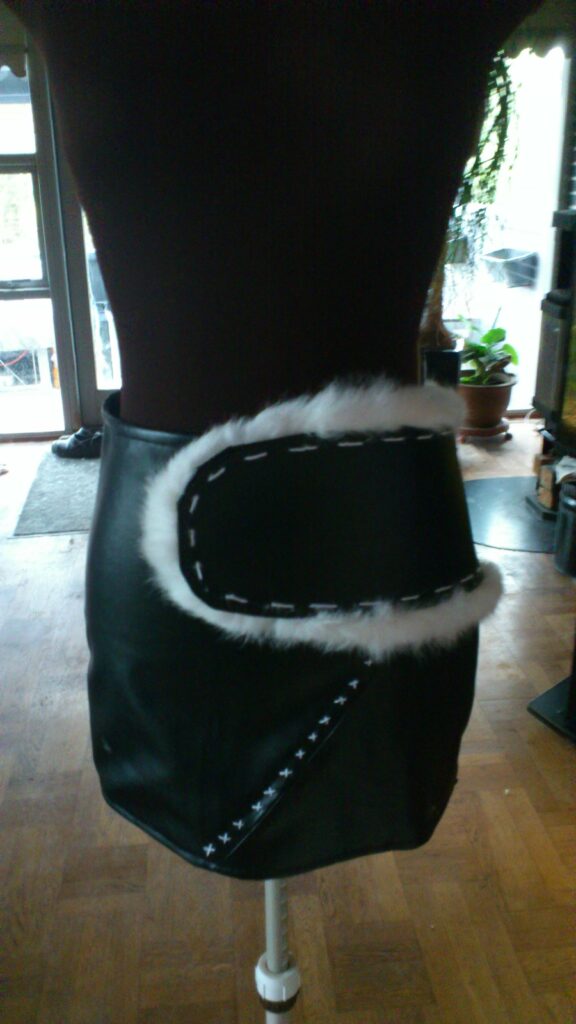 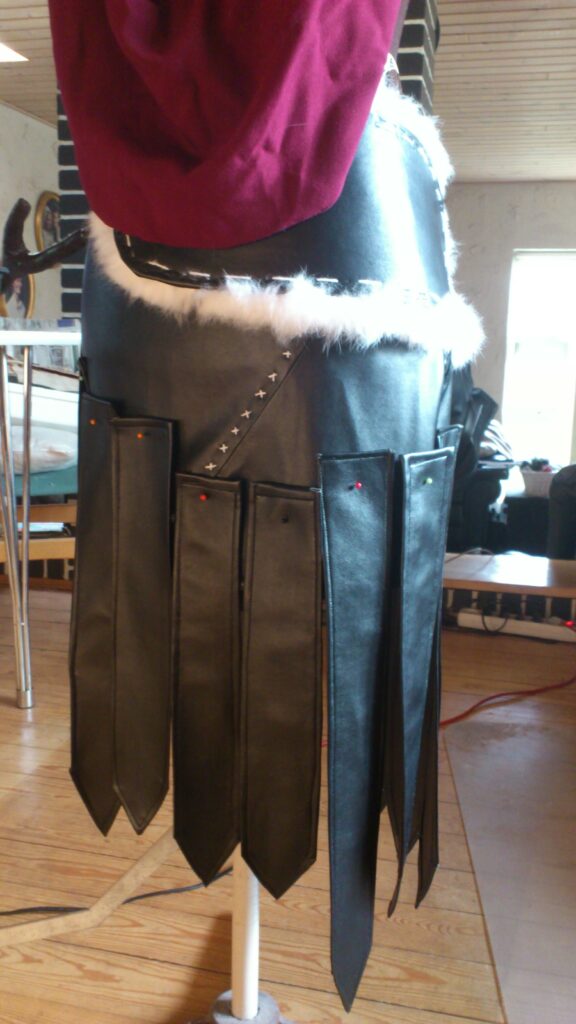 The bra… Now THAT is something I’m weirdly proud of. I didn’t even sew the thing from scratch, instead Frankensteining it from 3 different bras that I slaughtered. I bought two simple bikini tops from eBay, one white and one black, and took the straps from the black and the cups from the white. The fabric used for the white one was waaaay too white, but it turns out that soaking a bra in black tea for a few hours is a great way to dye it.

With the straps and the cups put together I technically had a fully-functional bra. But seeing as I’m a little paranoid, I thought an extra bit of security was in order. Which is how I came to slaughter bra nr. 3. This time, it was a self-adhesive silicone bra that I sewed into the cups of my bikini top, so that I could easily glue the whole thing to my chest and not worry about anything slipping. 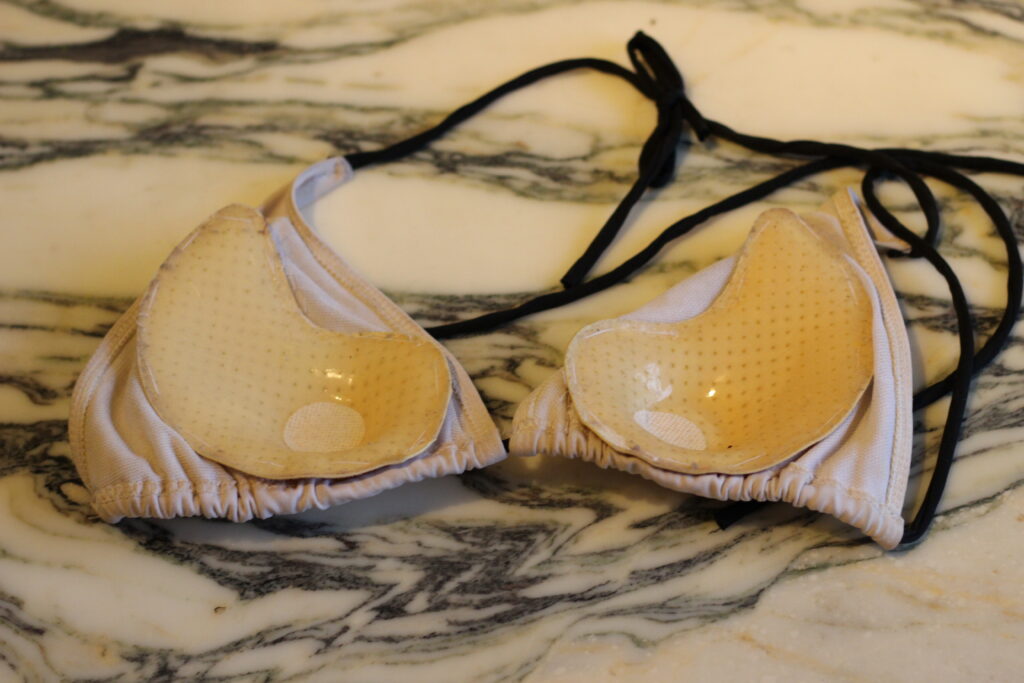 (Turned out to be a very good idea, since a friend accidentally untied the bikini top in the middle of a convention hall one time…)

The staff was a lot of fun. It was also an experiment that I had expected to fail spectacularly, but which somehow turned out great.

The base is a completely normal wooden broom handle. At the top I nailed some foam strips on some wire onto it and covered it in PU foam. From that, I carved a couple of “branches”.

I covered the whole thing in acrylic sealant, making the surface bumpy like a rough tree branch. Still can’t believe that I randomly grabbed some stuff you use to put in windows and somehow it all worked out…

Then, of course, I painted and varnished it. I tied a piece of leather with some feathers around it to give it the finishing touch. 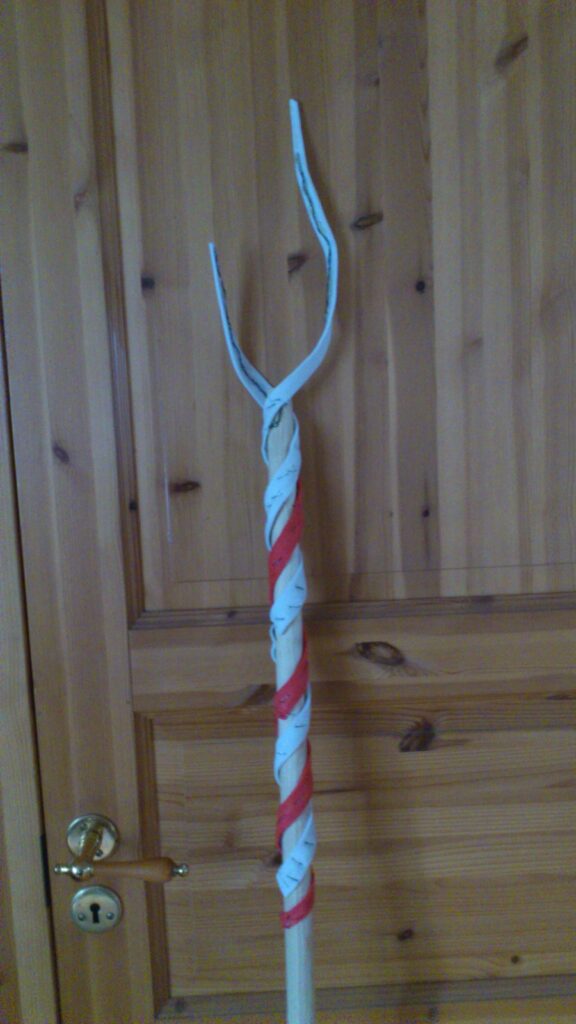 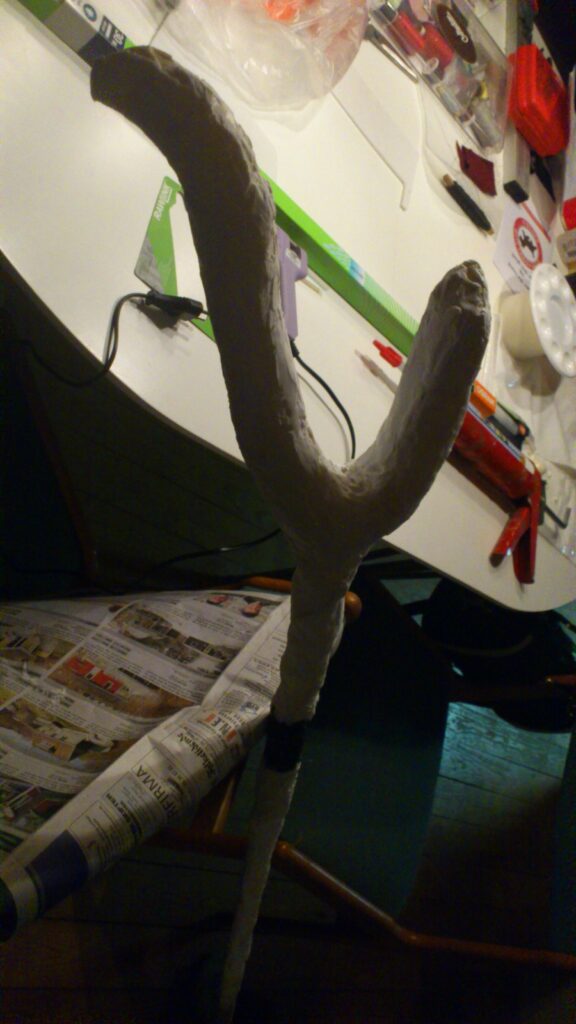 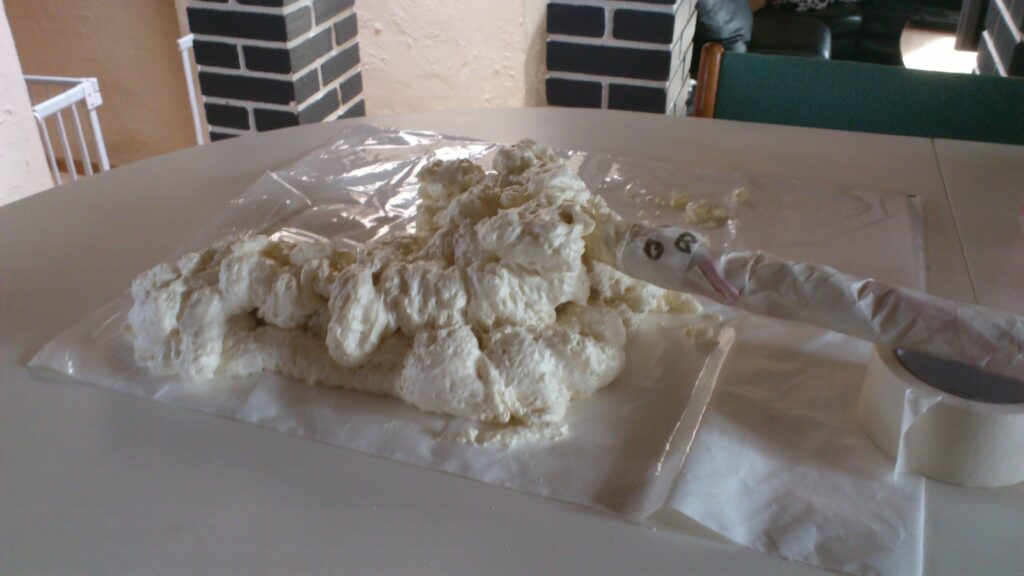 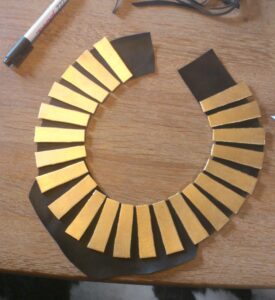 On to the necklace. This was made by making a base of black pleather and attaching the separate pieces onto it. It’s closed in the back with push buttons and the gold pieces are made from spray-painted EVA foam (the pendants also have Worbla covering the foam). The pearls are also attached directly to the necklace, instead of being a separate piece.

The sleeve is made from stretchy pleather and kept on with elastic at the top. The patch is made from pleather-covered EVA foam with sewn on feathers, attached to the sleeve with push buttons.

I had a lot of fun with this costume, both making it and wearing it.

I worked on the cosplay together with a friend (she was cosplaying Anders, also from Dragon Age) and we usually did it at her apartment. That led to a number of funny situations, for example one day when we talked about the latest game in the Dragon Age series, Inquisition, which I hadn’t played yet, so I was a bit confused when my friend’s boyfriend stuck his head into the room, yelled “Fuck Solas!” and left.

After playing the game, I get the sentiment, but it felt rather random at the time.

Another classic moment was when we had decided on how to dye my bikini top. My friend’s boyfriend came home some time after and went to his own workshop and my friend called out to him “Just so you know, there’s a bra soaking in tea in the kitchen.” There was silence for a while, before we heard “Wait… what?!”

I have also had a lot of good times wearing the cosplay. Not only have I won two contests with it, I also got a group of amazing friends that I would never have met if we hadn’t all been cosplaying from the same game franchise at the same convention.

That’s the magic of cosplay. You suddenly find yourself in a group of complete strangers, just because of your shared love for a game, and spend hours hanging out and taking pictures. That’s usually the end of it, but not for this group. Half of these people are the ones that now make up my Dragon Age tabletop group and I can’t even describe how much fun we have.

Side note: You can also have a great lot of fun when you suddenly have three people cosplaying the same character.