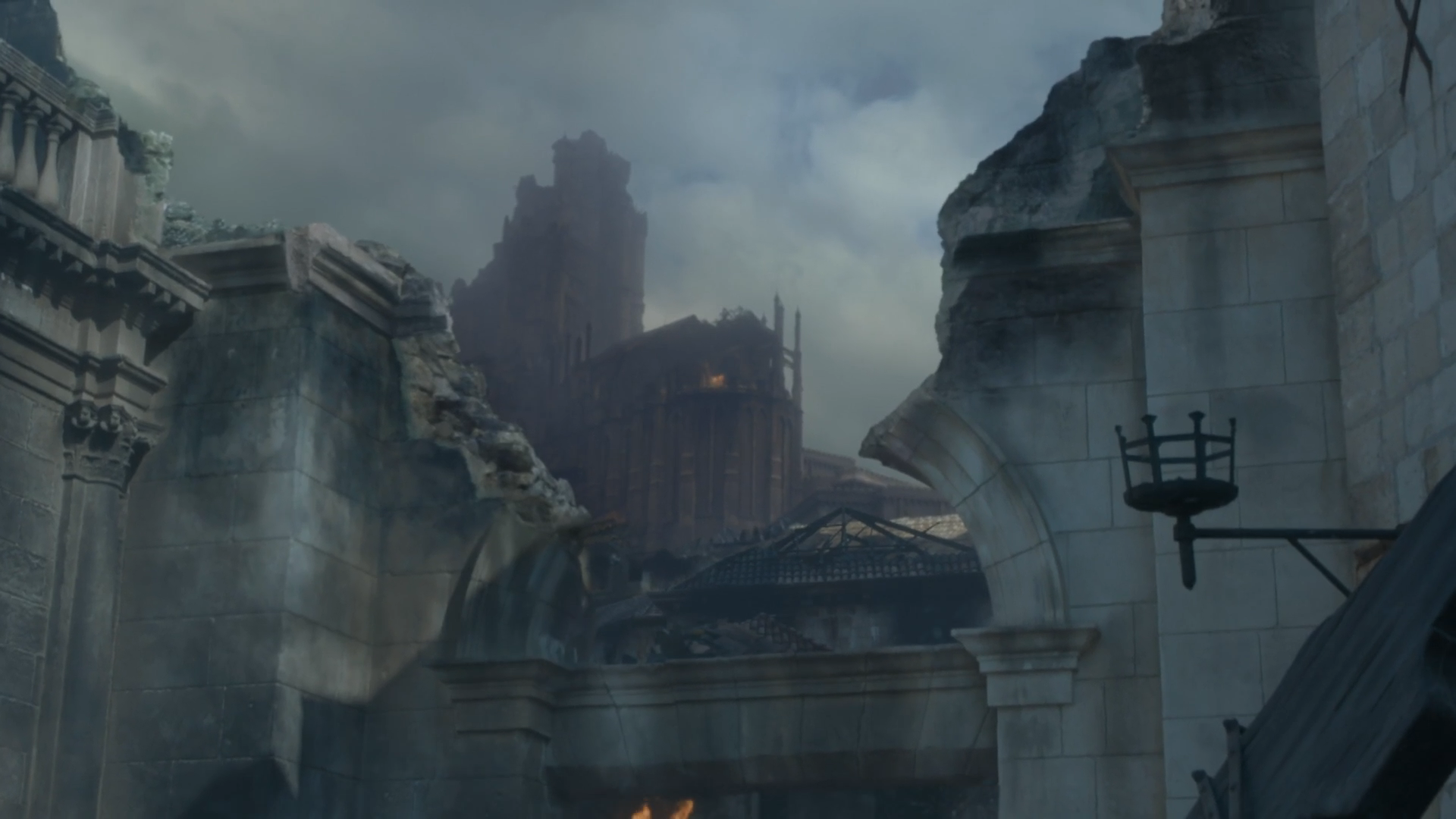 I almost got sad while writing this post for the very last episode of Game of Thrones. Not just because it was the end of an (overall) amazing show, but because I have really enjoyed channeling all my sarcasm and bad sense of humor into these posts.

What am I going to spend my Mondays on now?! Here’s hoping we won’t have to wait too long for a prequel.

And then I say now, I mean now.

What follows is my usual mess of thoughts in chronological order through the episode. Maybe tomorrow I’ll do a post about season 8 as a whole that will actually make a bit of sense, but for now, enjoy the randomness. 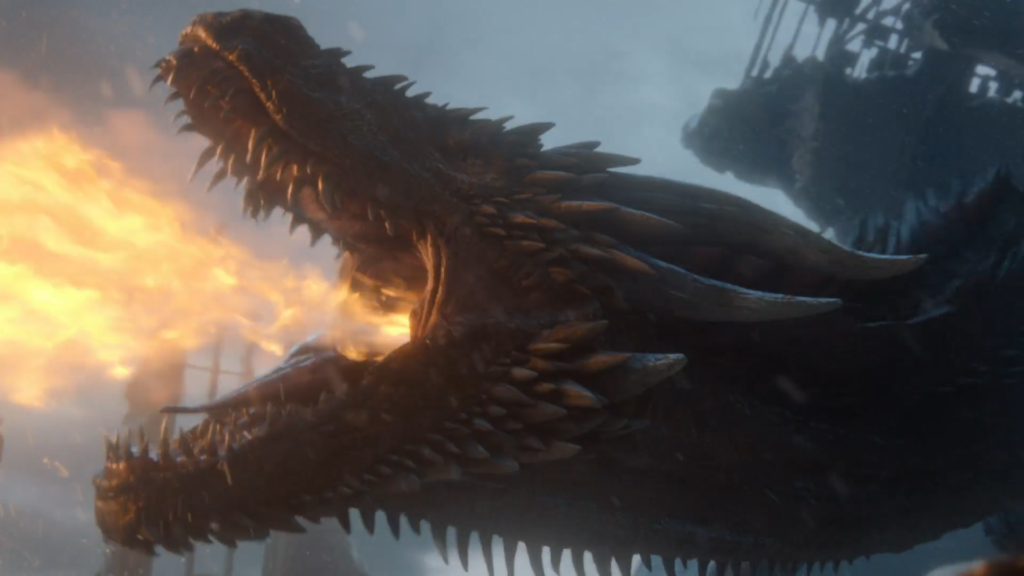 If Opening Credits were Twitter Users, I Would Yell at Them for Spoiling

I got ridiculously excited about seeing the names of actors of some of the characters I thought the show had just totally abandoned two episodes ago. But if Nikolaj Coster-Waldau and Lena Headey are just going to play corpses, I think maybe they should be moved to the end credits instead…

(But who knows? They might do a killer performance as dead people!)

If they’re still going to be battling for the Iron Throne, I think they should all consider that the one who wins is also the one who has to clean all of this up…

No shit, Jon. You’re telling me going to talk to the mad person who just destroyed an entire city and slaughtered about a million civilians might be a bit dangerous?

If Tyrion doesn’t know that, he really is an idiot, and you might as well let him get eaten.

I mean, after all this, Drogon is bound to feel hungry.

Why the Hell Aren’t You Leaving?!

Why are Jon, Davos and Tyrion even trying to speak to Daenerys and those still carrying out her commands? If there was ever a time to say “fuck it” and just run, it’s now.

There isn’t anything left to salvage.

No, no, no. Don’t have Tyrion dig out the corpse of the only person who always supported him. Don’t do this to me.

I’m not going to cry.

Decorating is Important, But Not That Important

Did they pack that huge ass Targaryen banner before invading or did they have a team of Unsullied seamsters working among the burning ruins?

But I understand. Obviously you need to decorate your pile of rubble before moving in.

He finally gets to fly free and burn and eat all the innocents his little dragon heart desires.

Where Did All These Dothraki Come From…?

Didn’t we see the entire Dothraki army charge into the dark during the battle for Winterfell and get squashed by the Night King’s army?

Or does it just not count if it happens off-screen?

You Gotta Give It to Dany…

…her hair game is on point. She has just committed genocide, yet her hairdo is more elaborate than ever.

If I have a busy day ahead of me, I barely manage to do a passable ponytail.

Did the Definition of ‘Liberate’ Change…?

“You have liberated the people of King’s Landing from the grip of a tyrant.”

Yeah, no shit… They’re all dead. They’ll be hard to boss around now.

(Especially because all the necromancers are dead, too.)

Tyrion is Back to His Old Ways… And That’s Okay

Not only did he finally stand up to a crazy person again, the first thing he asks when Jon comes to see him in his cell is, “Did you bring any wine?”

If I was in his shoes in this episode, I would also have done something that earned me a death sentence and then tried to drink myself to death before I was turned into a matchstick.

It seems like the thing to do in this situation.

How Did You Manage to Make This Sadder, Tyrion?

Tyrion’s life couldn’t really get much worse right now, but I still feel like it’s rather sad that Tyrion’s best friend in the world was Varys.

(Not that there’s a whole lot left…)

Okay, That’s It. Someone Kill Jon Before I Lose It

I am just done with Jon Snow. He has always been naive, but are you kidding me with this?!

He just said he wouldn’t try to justify it, yet here he is, trying to pretend any of the shit Daenerys went through excuses genocide.

Ned Stark didn’t raise his children, biological or otherwise, to be someone I wanted to hit in the face with a shovel. Not even season 1 Sansa was this naive.

(You’re making me overuse italics, Jon Snow, and you deserve every bit of my judgmental formatting!)

Mommy makes you burn down all the big, warm buildings and then makes you sleep outside and get covered in snow?

How Is The Iron Throne Still in One Piece?

My sofas can barely handle bored cats; This chair is dragon-proof.

Obviously we all knew Daenerys was crazy by now, but that look she gives the Iron Throne is the look usually seen on people wearing straight-jackets in padded rooms…

I admire how they just went all-out with the crazy. They could have had Dany be a little horrified after calming down from her temper tantrum, or even a bit regretful at now having to rule over a pile of rubble, but no: They just let her cut all ties with reality.

I sort of respect that.

I kept thinking, “If I was him, I would be doing this because I intended to stab her. But Jon doesn’t have the balls to do something like that.”

As anticlimatic as Dany’s death turned out to be, I’m at least thankful that Jon finally did what needed to be done.

…Now what the hell are they going to do for the rest of the episode?

Not sure how they made Drogon’s grief feel so much more powerful than Jon’s, but it was a truly touching scene.

Though I’ll admit, for a second there… I honestly thought he was going to eat her.

I Expected More From You, Yara

What is it with seemingly sensible characters condoning mass-slaughter, just because the one doing it helped them in the past? Yara has never seemed the type to put up with anyone’s shit and I didn’t think she would want to play vassal to a madwoman.

Same with Grey Worm. He used to follow Daenerys because she protected innocent people.

At least Tyrion finally woke up.

Of all the characters I thought would be standing in the last episode, Robin Arryn never even made Top 100.

Honestly couldn’t remember who he was before Sansa called him uncle.

He’s got a lot of nerve to stand up and act like he’s the most experienced one when he’s best known for being a captive and for shagging his new wife while his family and all of their men were being brutally murdered.

Be a good boy and sit down, Edmure.

Are You Really Suggesting Democracy, Sam?

That concept is going to be harder for these people to accept than the existence of White Walkers, dear Lord Tarly.

However, they should all know better than to not take Sam seriously by now.

A lot of shit would have been prevented if people just listened to Sam.

So he knew he was going to be king all this time and he just let everyone else fight like rapid dogs for the throne?

Now turn down the creepiness a bit, okay…?

Tyrion, Give Yourself a Bit of Credit

You started out as a drunken whoremonger. Now you’re a miracle worker.

How Much Time Has Passed, Anyway?!

Tyrion says he’s spent weeks in captivity, thinking over everything, yet King’s Landing looks like it has had years to be rebuilt by the time Jon is let out.

Unlike the Game of Thrones Writers, I Will Inform You When Time Jumping

I will now be skipping all the major scenes until we see Tyrion again and addressing them at the end, because I have nothing sarcastic to say and I don’t want to randomly get serious in the middle of everything.

Tyrion as Hand, with Sam, Bronn, Davos and Brienne as the King’s Council?

That’s a dream team if I ever saw one.

And Podrick looking all proud in his Kingsguard armor? Just precious.

But really? They made Bronn Master of Coin? How is that ever going to end well?

But Davos spent a lot of time learning to read. If he has the skills to be Master of Grammar, he deserves the title.

Also, if HBO needs ideas for spin-offs: I would totally watch a mini-series about this council dealing with the day-to-day work of rebuilding King’s Landing.

Jon does in no way deserve Ghost’s affection, but I still got all teary-eyed when he finally petted him.

Sometimes, I think I’m a cold and unfeeling person, but then I see a display of love between a dog and its owner and I’m hit with Instant Emotions. It’s good to know I’m not completely dead inside, even if my empathy is reserved for fluffy companions.

And Lastly, To My Coworker Who Said the Starks Weren’t Going to Win:

I’m so going to lord this over you tomorrow.

(He also said he thought Daenerys would be the best queen.)

…I’m only being this petty because he mistook my Witcher medallion for a Stark insignia and they look exactly nothing alike. 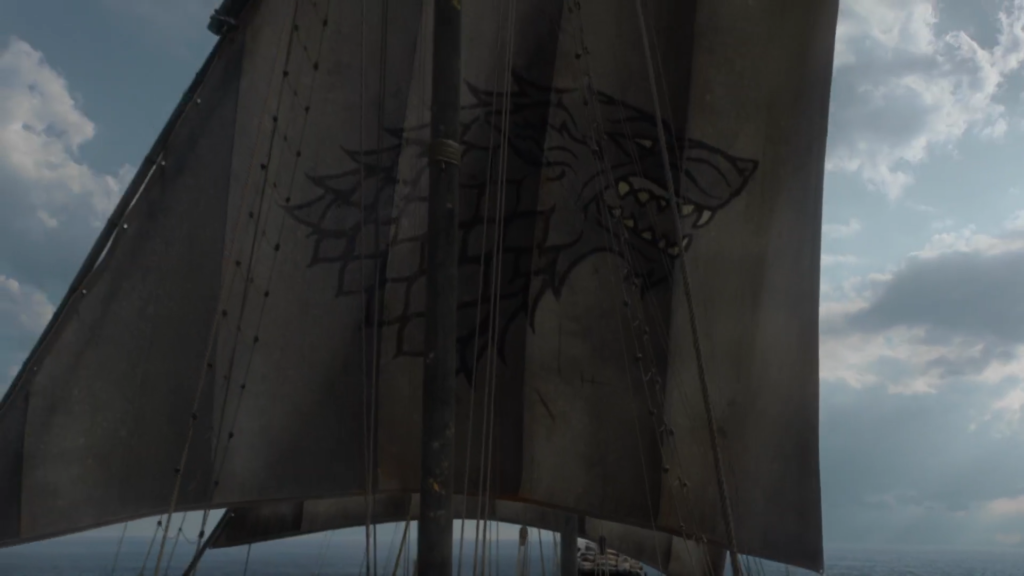 A few final thoughts (it’s the last episode, so I’ll throw in a few serious ones):

While the pacing was all wrong, and I had hoped for an epic fight to end it all, I think the end result here is as good as it could possibly be.

Bran will be a good king. He just needs to leave the diplomacy to Tyrion so he doesn’t creep out all his new allies.

I have always wanted Sansa as queen, and I have never thought countries stretched across regions with vastly different cultures really worked, so Winterfell as a separate kingdom seems like a great solution, when the King of the Six Kingdoms and the Queen in the North are on good terms. I did actually think it would end with all the seven kingdoms becoming independent again.

Jon needs a simple life. He’s not good with decisions and he’s too naive for politics, so a simple life on the Wall (or living with the wildlings) is the best choice for him. Hopefully he won’t get Caesar’ed again…

Brienne finishing Jaime’s entry in the Book of Brothers is bittersweet, but so beautiful.

Tyrion has already proved that he’s a good hand (the first time around, not to Daenerys…), so even if he’s going to be ever so slightly miserable, he’s the obvious choice.

I’m hoping Arya will finally become less murderous now when her deceased family is avenged and her living one is safe. She was beginning to worry me a bit.

All in all, I believe everything will end well as long as Drogon doesn’t come back for revenge and someone keeps an eye on Bronn.

As I said, I will probably do another post about what I actually think about the last season (instead of just live commentary) and it will probably be dull, because I’m at my best when I’m just rambling, but stay tuned.

If you’re late to the party, but still want to read my thoughts on the other episodes of season 8, here’s my posts for “Winterfell”, “A Knight of the Seven Kingdoms”, “The Long Night”, “The Last of the Starks” and “The Bells”.

And, of course, I want to hear your thoughts in the comments!