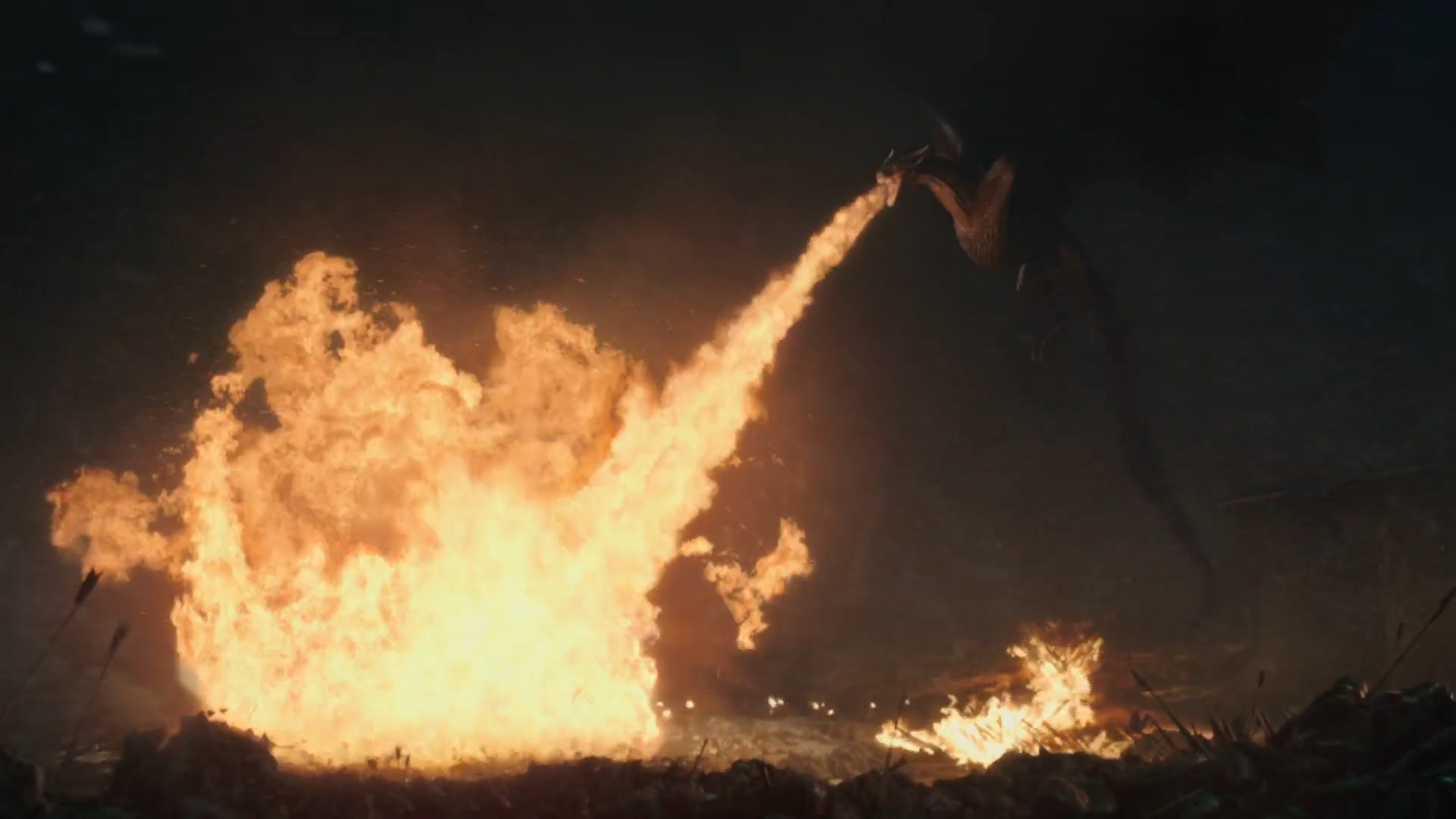 Spoilers. So, so many spoilers.

I’m not kidding. If you haven’t watched season 8 episode 3 ‘The Long Night’ and you’re seeing a preview of this – Don’t click on it. If you have already clicked – Get out of here!

Unless, of course, you want to have a really epic Game of Thrones episode spoiled for you instead of just watching it yourself.

Then I guess I can’t stop you.

If you have watched the episode: We need to discuss it in the comment section. Read the post, don’t read the post – we’re talking about this.

If you want to hear my random, disjointed thoughts, I have written another stream of consciousness like I did for ‘Winterfell‘ and ‘A Knight of the Seven Kingdoms‘. Keep scrolling. 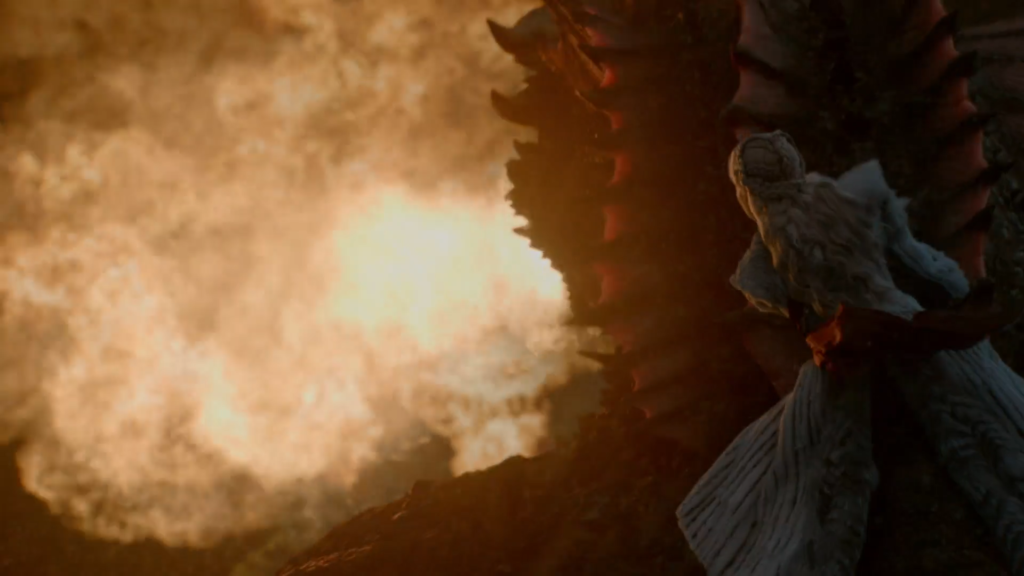 Fire Bitch is Back!

Melisandre’s presence usually means nothing but trouble (of the ‘burning children for no good reason’ variety), but she actually seems to be useful this time around!

It puzzled me why the army wasn’t carrying torches, considering fire is the one surefire (haha, get it?) way to deal with these undead bastards, but apparently they were all just waiting around for a certain redhead to turn up and light their swords on fire.

So, yeah… useful. But I still don’t blame Davos his “Oh, shit”-expression when he realizes he has to let her in.

Why Can’t These Guys Have Their Fight in the Daylight?!

Obviously, I have already answered my own question above – Melisandre’s fireshow wouldn’t have been as epic during the day, but I’m watching during the day and I can’t see a thing. I’m not getting blackout curtains just because the Night King suddenly thinks he’s a vampire and can’t handle sunlight.

I know, I know, Night King, but he’s been perfectly happy showing up in all his pale, blue-eyed glory under equally blue skies before.

I know you’re tough, Arya, but you’re not fireproof. I would discreetly move somewhere out of sight.

Seriously, why even bother with the damn army? If the dragon barbeque doesn’t do the trick, you guys are screwed anyway.

Here’s hoping they don’t zombify you.

It’s All Sunshine and Rainbows in the Crypt

First of… Does this crypt have another exit? Am I the only one uncomfortable by all the vulnerable people being stuffed into a stone tomb where they can’t escape if the enemy breaches the defenses?

Sansa and Varys are both totally embracing their new home and spreading just about as much cheer as the dead people around them. Tyrion is still believing he can actually do something besides becoming zombie food, and Missandei is just fed up with everyone’s shit.

What the Hell are Dany and Jon Doing?

Why are you just flapping around up there?

Turn around and roast some goddamn zombies!

Wait… Where is Ghost?!

Jorah came back from the failed charge, but I just realized Ghost wasn’t with him.

Screw the Night King, everybody needs to be looking for the doggy RIGHT NOW.

Okay, Jaime Did Actually Punch A Wight in the Face…

After the first episode of the season, a friend on Twitter suggested that Jaime should have a hand made from dragonglass. I jokingly asked, “What is he supposed to do with that? Punch zombies in the face?”

I take it all back. Somehow… it works.

If Anyone Important Dies, I’ll Probably Miss It

Still can’t see a thing on this screen.

I’m just going to find someone else’s recap later and figure out who died.

Oh, So That’s Why Arya was Trending on Twitter!

Everyone’s just getting tackled by wights left and wight, half the big tough characters are pissing their pants, and Arya is a one-woman army, making good use of her fancy new Baratheon-forged spear.

(Proofread edit: I swear the “left and wight”-typo wasn’t intentional, but I’ll be damned if I’m not leaving it in now.)

As much as I want to rage about Lyanna being killed off, it’s hard when she took a fucking undead giant down with her, all the while screaming like a banshee.

The scene was just too perfect an end to the character for me to be truly mad about it.

I really hope Dondarrion doesn’t die. Permanently, I mean. Not because he’s particularly important, but I can only actually see what’s going on when he’s around with his handy flaming sword.

(…and literally 10 seconds after I wrote that note down, Dondarrion was tackled by wights and stabbed to death.)

Okay, So the Night King is Fireproof

That can’t be good.

(Also, he’s so obviously a Targaryen. Targaryen symbolism all over the place, dragon-riding skills and fireproof skin. I have read 5 books and 3 short stories that all hammered into my skull that those last two were the main traits of a Targaryen.)

But What are His Clothes Made From…?

I understand that no one wants to see a butt-naked Night King, but I do think it’s a little unfair that Daenerys had to lose all her clothing after taking a fire bath, while Blue Guy’s armor isn’t even singed.

I did not see Wight Lyanna Mormont coming!

But Everyone Called the Dead Starks in the Crypt Waking Up…

…yet it was somehow still shocking.

Good thing Theon’s grown some balls (we all know he needs them), because Bran’s just sleeping through the whole battle.

Meanwhile, Jorah is dying defending his queen, as we all knew he would. Brienne and Jaime are being overrun by wights side by side, Jon is playing tag with Viserion, Sansa and Tyrion are finally coming to an understanding that would have been a lot more useful back when they were actually married, Varys is surprisingly still alive, and the Night King is pretending he’s in a gangster movie.

Then there’s a lot of staring in slow-motion…

…and then Arya comes flying out of nowhere and stabs the Night King.

I saw Edd, Lyanna, Dondarrion, Theon, Jorah and Melisandre as the major casualties, but again, I couldn’t actually see anything most of the time.

I’m watching it again after nightfall, so I might lose another 5 named characters then.

And, of course, there’s literal heaps of dead minor characters everywhere. Glad I’m not cleaning that one up.

(Also, I love how Melisandre just dies. No one’s even trying to kill her or anything.) 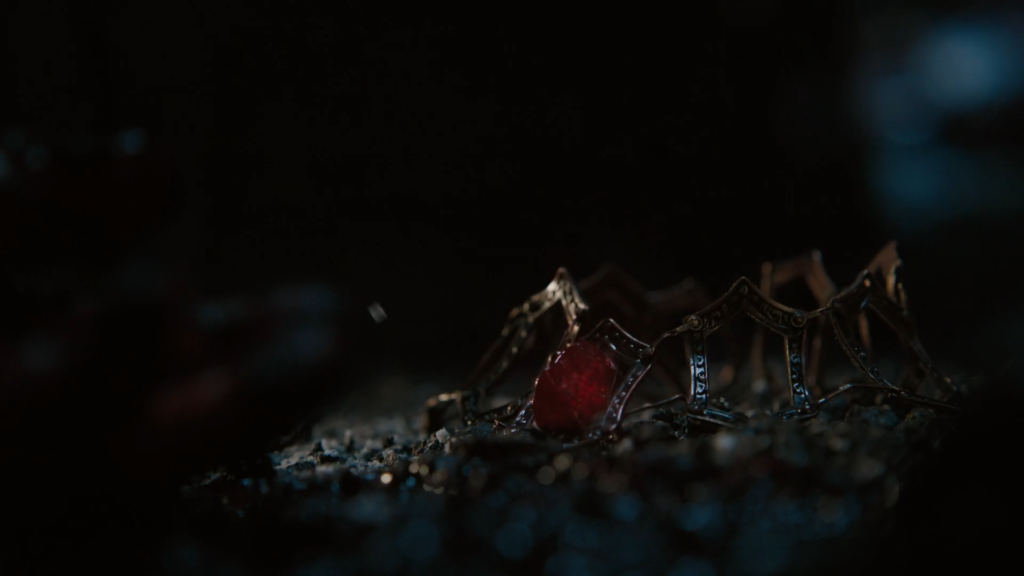 6 thoughts on “Spoilers Galore – Thoughts on Game of Thrones S8E3, the Battle of Winterfell”